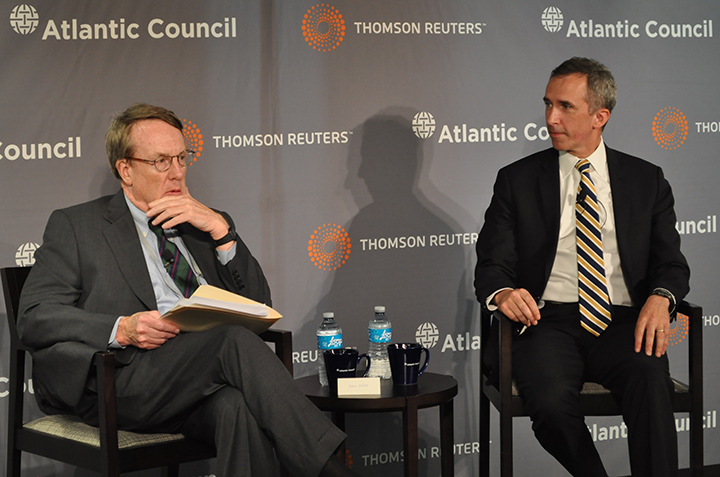 The Obama administration will carefully consider what intelligence it shares with Russia pertaining to enemy targets in Syria in part due to the belief that the Russians do not apply the same degree of care to avoiding civilian casualties, a senior US official said at the Atlantic Council on September 13.

Noting that the US military has a “highly attuned objective of limiting civilian casualties to zero wherever we can,” Marcel Lettre, undersecretary for intelligence at the Department of Defense, added: “It’s not been clear to the US military in the past that the Russian operating approach has that similar calibration.”

A US and Russia-backed ceasefire came into effect in Syria on September 12. Under the terms of the agreement, if the truce holds for seven days, the United States and Russia will collaborate on air strikes. The United States and Russia negotiated the ceasefire with the intent of allowing for the delivery of humanitarian aid. However, on September 14, United Nations officials said that trucks of food, medicine, and blankets remain stalled at the border with Turkey because they did not receive a guarantee of safe passage.

The New York Times reported that the ceasefire deal has caused a rift between the White House and the Pentagon. Lettre said the intelligence community and the Department of Defense are “strongly on board” with supporting the ceasefire, but added the caveat: “as long as the various steps that have been agreed to to carry forward the cessation of hostilities play out as we expect they should.”

“We will just have to work very hard at navigating through what will be a very complex information-sharing environment,” he said, adding: “There have been already, and will be, clear rules of the road put in place about what’s shared and what’s not and for what purposes.”

As reported by the New York Times, “chief among Pentagon concerns is whether sharing targeting information with Russia could reveal how the United States uses intelligence to conduct airstrikes, not just in Syria but in other places, which Moscow could then use for its own advantage in the growing confrontations undersea and in the air around the Baltics and Europe.”

Striking a balance between transparency and intelligence

Lettre spoke during the “Power of Transparency” series hosted by the Atlantic Council and Thomson Reuters. In his address he focused on the adaptations adopted by the intelligence community since the terrorist attacks on the United States on September 11, 2001, and how they have helped intelligence agencies to identify and address modern security threats.

He said a fine balance has to be struck between transparency and intelligence in order to build trust with the American people. “The landscape of our society, our government, and our technological tools have changed in [the] fifteen years since 9/11, and with those changes are expectations for transparency into the operations and performance of our government, including intelligence,” said Lettre.

As part of this effort to create greater transparency, documents related to the 2011 US Special Operations forces raid that resulted in the death of al Qaeda leader Osama bin Laden in Pakistan, as well as 2,500 documents from the president’s daily intelligence briefing while Richard Nixon and Gerald Ford held office have been made public. In July, the Obama administration started providing summaries of information about US counterterrorism strikes and the assessed number of combatant and noncombatant deaths resulting from those operations.

“Over the last several years…the intelligence community has been taking steps to be both more proactive and more transparent as we work to help the American public understand what it is we do and why it is important,” Lettre said.

The Office of the Director of National Intelligence published the “Principles of Intelligence Transparency for the Intelligence Community,” with the intention of facilitating “intelligence community decisions on making information publicly available in a manner that enhances public understanding of intelligence activities, while continuing to protect information when disclosure would harm national security.”

These principles facilitate the organization of processes and policies to regulate guidelines for the sharing information. Additionally, the intelligence community is “declassifying and publishing intelligence documents—over the past three years, more than 5,000 pages—to help the public understand our operating framework,” said Lettre. These historical documents no longer contain sensitive information, but can shed light on the workings of the intelligence community.

The Department of Defense now also provides information, when possible, if a dangerous actor is removed from the battlefield. Most recently, on September 12, the Pentagon confirmed the death of Abu Muhammad al-Adnani, a chief leader of the Islamic State of Iraq and al-Sham (ISIS), in a targeted air strike. These measures have been adopted to meet the need for greater transparency from the intelligence community.

However, these measures force intelligence officials to consider the distinction between information that can and cannot be made public due to concerns regarding the safety of intelligence sources. With regard to striking this balance, Lettre asserted “it’s about providing enough that the public trust is solidly in place, that the confidence of the American people is solidly in place.”

Lettre also spoke to the significance of transparency within the intelligence community. He asserted that increased cooperation among intelligence agencies, from sharing information through data streams to engaging in joint task forces, has allowed those agencies to more quickly and efficiently cope with security threats. “The power that has come over the last fifteen years from all parts of the intelligence community working from the same picture, working together to protect the nation…We have called this ‘jointness’ or integration of our efforts,” he said.

The speed and agility of terrorists both at home and abroad, according to Lettre, indicate the “premium need” for integrated efforts across intelligence agencies, which can facilitate crucial adaptation. Addressing this need in the wake of 9/11, “congressionally-driven intelligence reforms and oversight were taking hold in the form of tools to drive integration, resources, money, people, priorities, acquisition, mission management, and operations. These reforms drove integrated efforts across the seventeen agencies of the US intelligence community, finally allowing the whole to be greater than the sum of the parts,” said Lettre. These changes now allow intelligence agencies to more efficiently cope with modern terror threats.

Lettre described these adaptations as the “third offset,” or a theme of innovation in the military as they seek new advantages over adversaries. “Now, more than at any other time in our history, intelligence plays a critical role in informing our defense leaders to make sound decisions and in our military commanders’ abilities to deter our adversaries, and should deterrence fail, to be able to defeat the enemy,” said Lettre.