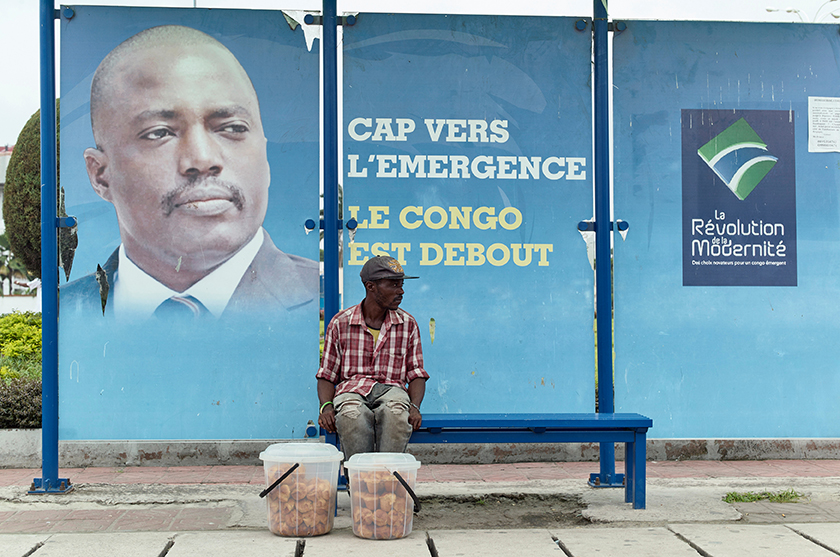 A vendor sat at a bus stand emblazoned with a photograph of the Democratic Republic of the Congo’s president, Joseph Kabila, in Kinshasa on December 31, 2016. (Reuters/Robert Carrubba)

Joseph Kabila, the president of the Democratic Republic of the Congo (DRC), is unlikely to abide by the terms of an agreement that aims to end his fifteen-year rule and ensure the DRC’s first-ever democratic transition of power, said J. Peter Pham, director of the Atlantic Council’s Africa Center.

“Miracles can happen and I guess, in the Christmas spirit, one wants to acknowledge the possibility, but I would not wager” that Kabila will keep his end of the bargain, said Pham, who also serves as vice president for research and regional initiatives at the Atlantic Council.

The deal, struck at the end of December and signed by the opposition as well as members of Kabila’s government, though not Kabila himself, allows the president to remain in power until elections are held at the end of 2017 and a successor takes office. During this period, a person picked by the opposition will serve as prime minister and have powers that would check Kabila’s authority.

Under the terms of the agreement, brokered by the Catholic Church, Kabila cannot seek a third term in office, which would violate the constitution.

“If the agreement, as written, is to be honored it would essentially commit the president to a course which inevitably would lead to elections in which Kabila would be ineligible and a member of the opposition will probably be elected to head the country,” said Pham.

Elections originally scheduled for November of 2016 were cancelled after the election commission cited logistical and financial hurdles. Kabila formed a transitional government and said elections would be held in 2018.

The DRC has teetered on the brink of a crisis since Kabila failed to step down when his constitutionally mandated two terms in office expired on December 19. Dozens of people were killed in protests that erupted across the country. As the crisis deepened, leaders of the influential Catholic Church stepped in to broker an agreement between Kabila and the opposition.

By agreeing to the terms of the deal, Kabila is betting that the opposition will find it harder to rally its supporters on the grounds of a technical violation of the agreement as opposed to a tangible missed deadline to relinquish office, as was seen on December 19, said Pham. “It is always easier to rally people around black and white issues than it is to mobilize them around a legal argument, right as that argument may be,” he said.

The opposition, on the other hand, doesn’t want to plunge the DRC—a country where an estimated five million people were killed between 1997 and 2003—into another crisis “so they are willing to give one last chance for a soft landing,” Pham added. “One hopes they are right.”

Kabila took power in 2001 following the assassination of his father Laurent Kabila. He has served two five-year terms after elections in 2006 and 2011—the latter a highly disputed poll whose results were denounced by independent observers ranging from the country’s influential Roman Catholic bishops to the European Union’s election monitors.

J. Peter Pham spoke in an interview with the New Atlanticist’s Ashish Kumar Sen. Here are excerpts from our interview:

Q: What is the significance of this deal? Does it not just kick the can down the road and allow Joseph Kabila to remain in power for another year?

Pham: The Roman Catholic Church—represented by the Congolese Episcopal Conference (CENCO) and its president, Archbishop Marcel Utembi of Kisangani—pretty much pushed the deal. The bishops enjoy a great deal of moral suasion not only because the country is predominantly Christian—more than 50 percent Roman Catholic and an additional 20-plus percent members of other Christian churches—but because of the strong stand they have repeatedly taken, courageously speaking truth to power such as when Cardinal Laurent Monsengwo Pasinya of Kinshasa denounced Kabila’s “win” in the shambolic 2011 polls as “illegitimate.” Thus CENCO’s call for the parties to come to the negotiating table couldn’t be ignored.

In the end, the opposition gave way on a few issues. Most importantly, Joseph Kabila will be allowed to stay on at least until the election and the swearing in of a successor. Moreover, the agreement did not address directly the demand to deal with the political prosecution of Moïse Katumbi, the former governor of Katanga province, and the issue of [the political prisoner] Jean-Claude Muyambo, among others who have been persecuted by the Kabila regime. These individual cases have been set aside in the interest of getting an agreement. Katumbi, who is in exile, deserves credit for not allowing his personal fate to obstruct the deal. That issue will now be decided through the good offices of the bishops.

Kabila, on the other hand, also succumbed to pressure. The cardinal archbishop of Kinshasa delivered a strong Christmas sermon in which he made clear that “he who respects the constitution of the country has no fear of prosecution, but he who disrespects the constitution will not be forgiven for plunging the country into a crisis.” There was no doubt that the prelate was referring to Kabila, who had already overstayed his constitutional term of office. The United States and Europe, which had imposed sanctions against members of Kabila’s government, had also been moving toward imposing sanctions against the president and his family, including travel bans and asset freezes.

As a result, Kabila gave something as well. He originally wanted to appoint a prime minister of his choice from the opposition. The agreement calls for the prime minister to be chosen by the opposition and, more specifically, from those parts of the opposition that were not part of the earlier “agreement” of October 18, when Kabila coopted some minor opposition politicians and tried to pass the resulting pastiche as a “government of national unity.”

The key going forward is going to be in the implementation. The agreement says the prime minister will have the full powers given to a prime minister in the Congolese constitution of 2006. These are fairly significant powers, which, if exercised, can be a significant check on the president’s authority.

For example, Article 81 says the president can only appoint officials, including senior military officers, police commanders, and ambassadors, with the consent of the prime minister and the cabinet. The prime minister also has to countersign decrees of the president for them to have legal effect. In theory, these are significant checks on presidential prerogative if the constitutional provision is respected the way the political accord says it will be.

Furthermore, the text of Article 91 of the constitution says it is the prime minister and the cabinet who, “in coordination with the president,” define national policy. Given the great lengths that he has gone to avoid an election and remain in power, it is very difficult to imagine that Joseph Kabila will respect an agreement that gives that much [influence] to a prime minister who will not be his creature.

Q: Are you then not optimistic that the deal will stick?

Pham: Miracles can happen and I guess, in the Christmas spirit, one wants to acknowledge the possibility, but I would not wager on it. If the agreement, as written, is to be honored it would essentially commit the president to a course which inevitably would lead to elections in which Kabila would be ineligible and a member of the opposition will probably be elected to head the country.

Q: Are there consequences for Kabila reneging on the deal?

Pham: In theory, reneging on the deal or the deal falling apart puts us back to where we were before the deal, which is that the president has overstayed his term in office that expired on December 19. Potentially there could be protests, civil strife, and international sanctions—to say nothing of the risk of significant violence and major conflict.

The gamble that Joseph Kabila is taking is that it is one thing in the aftermath of December 19, a very clear black and white date, to mobilize protests and the international community; now it is going to be a he-said, she-said scenario on whether any specific action or failure to act [by Kabila] was a violation of the agreement.  It is always easier to rally people around black and white issues than it is to mobilize them around a legal argument, right as that argument may be.

The opposition is taking the gamble because they don’t want to plunge the country into conflict and so they are willing to give one last chance for a soft landing. One hopes they are right.

Q: Do you expect international pressure on Kabila to lessen as a result of this agreement?

Pham: That would be a mistake on the part of the international community. Vigilance is going to be critical to keep both sides committed to the agreement and moving toward the first-ever democratic transition in the country.

But I am a realist as well and I fear that once the immediate crisis is defused, it becomes a matter of “out of sight, out of mind.” Moreover, there are also multiple transitions underway in the international community with changes in personnel, including those who have been handling issues related to the Congo. There is a new United Nations Secretary-General just taking office; we are in the midst of a transition in the United States; France will undergo a transition in five months. Tom Perriello, who served as US special envoy for the Great Lakes region, was a political appointee and left his job on December 23.

It would be a real tragedy—indeed, a betrayal—if, amid all this shuffling of personnel, the Kabila regime essentially got a reprieve during which its members could continue to enrich themselves through the corrupt deals that investigative reporting by Bloomberg, the New York Times, and Le Soir [in Brussels] recently documented.

Q: There were few protests after Kabila remained in power beyond December 19. Kabila appears to have the backing of the security forces for now. Does the opposition have the public support to topple his government should he refuse to step down?

Pham: On one hand, with an agreement the opposition runs the risk of finding it difficult to rally the people around a legal violation. On the other hand, even without additional sanctions, the political uncertainty in the country is having a deleterious impact on its economy, on top of the negative impact of the low prices for primary commodities that are the Congo’s chief source of foreign exchange. The ability of Kabila and his supporters to get the resources to continue paying the security services that keep them in power when even the military and other public sectors are going weeks, if not months, without being paid, is not going to improve much. Even without the political grievances, the masses may take to the street over their economic plight.

Pham: The devil is in the details [of the agreement]. The question is, are the resources going to be there? One of the things they have created in this political agreement is a National Council for the Implementation of the Accord and the Electoral Process (CNSA). This is supposed to have twenty-eight members with CENCO, which mediated the accord, playing a significant role. The CNSA, as its name implies, will oversee the implementation of the agreement. The members of this council, however, have not yet been appointed. And it remains to be seen what resources they will have to carry out their mission, even if they have the political will to do so.