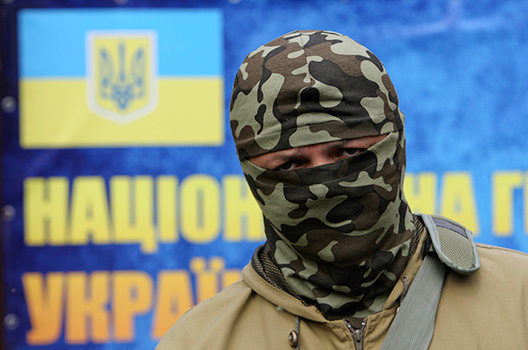 Only his family and closest friends know his real name and his face has never been shown in public. Television viewers have seen only his eyes and heard his calm voice, a voice that speaks many uncomfortable truths.

Semen Semenchenko, is the nom de guerre of an ethnic Russian man from Donetsk, a father of four, and a man whom many view as a savior. A former businessman and army reserve captain who spent six years in the active military, Semenchenko is the commander of the Donbas Battalion, a Ukrainian volunteer militia that is trying to do what the Ukrainian police and military have not. That is, to protect the population in southeastern Ukraine from marauding pro-Russian separatist militants who have besieged cities and towns in their campaign to splinter Ukraine and join swathes of its territory with Russia.

Ukraine’s military campaign against the Russian-backed militants, officially called an “anti-terrorist operation,” has had mixed results. Police units in the region often have either openly sided with the separatists or done nothing to prevent the pro-Russian gunmen from seizing buildings or attacking pro-Ukrainian residents.

That is why Semenchenko and his men have taken up arms to fight separatism. “If we don’t do this, who will?” he asks in a recent TV interview. Similar Ukrainian battalions have been formed in other provinces.

Semenchenko’s struggle, like that of many involved in the battle for Ukraine is partially played out on social media. His nearly 50,000 followers hang on his every post, sending notes of thanks and support, offering help and advice. Among his Facebook friends are opposition leaders, writers, journalists, Ukrainian and Russian pro-democracy activists. Many of them hail from eastern Ukraine, especially Donetsk.

Amidst a sea of government indecisiveness and political brinksmanship, Semenchenko comes across as a plain-speaking, earnest battalion commander, and cuts an impressive figure that Ukraine’s disenchanted population seem to  identify with and admire.

Semenchenko says that the Donbas battalion attracts more men willing to fight than it can handle. More than 600 volunteered to serve, but not all were accepted. “Unlike those Ukrainian military who hand their weapons and equipment over to the enemy, our men are ready to fight,” he points out.

In an extensive interview with Hromadske TV, an internet-driven public broadcaster financed by grants and donations, and currently airing on Ukraine’s first state channel, Semenchenko, dressed in olive green military garb , his face hidden by a camouflage balaclava mask, describes the kind of man who is drawn to join the battalion. “Seventy-five percent are Donbas residents. These are normal people, despite all the nonsense that’s been said over the last three months about us, we have nothing to do with Right Sector,” a right-wing organization. Many of the men who have joined are Russian, he says, and all of them are fed up with the lawlessness that has been unleashed on their homes and communities.

Recently the volunteer battalion has received official status. Its companies will become aligned with Ukraine’s defense structures.  Subsequently the battalion is undergoing special training and will receive heavy weapons as it takes on more serious offensive missions. “We realize that if we want to change anything, we must change it from the inside,” says Semenchenko, explaining why he and his men decided to join the ranks of the official military. Despite that affiliation, the battalion will not be subject to regular military bureaucracy and constraints, he’s quick to add.

The arrangement foresees three companies of 110 men each. One is being trained as a special-forces unit to work alongside Ukraine’s National Guard, another will help man the Ukraine-Russia border together with a volunteer battalion from the neighboring province of Luhansk, and the third company will patrol the southern regions of Donetsk province.

For more than twenty years, Ukraine’s armed forces and the police were decimated through underfunding and corruption. The army’s inefficiency and the police’s pliable allegiance can be dealt with only through direct action, says Semenchenko. “Everything can be changed. We just have to stop complaining about everything being rotten and actually start doing something.”

The kind of direct action the Donbas battalion commander talks about can be seen in a video of Semenchenko and several of his men dressing down police officers in Velyka Novosilka, a Donetsk town of 6,300 people. In language peppered with expletives, he berates the men for being cowardly and selling their allegiance.  (Fragments of the video begin at 5:40 in the Hromadske interview.)

“Have you forgotten whom you are sworn to protect? This is Ukrainian soil and we will have Ukrainian rule here,” he instructs them in Russian, as they stand sheepishly.  ”If you forget your oath we will replace you and (expletive) fire you!” he warns, as the police officers stand there blinking nervously.

The dressing down and a bit of pushing was effective, Semenchenko says, and the Velyka Novosilka constabulary has been more disciplined and on good behavior ever since.

In an early May interview with Russia’s opposition TV station Dozhd, Semenchenko accuses ousted president Viktor Yanukovych’s Party of Regions of fomenting and supporting separatism. He describes how local authorities cultivated a negative image of the pro-democracy Maidan demonstrators who were camped out in Kyiv’s Independence Square and whipped up fear among the local population, convincing them that the Maidan movement was a danger to their lives. This process should have been nipped in the bud then, insists Semenchenko. It was not and now Ukraine has a much bigger problem.

Semenchenko and his men were involved in a heavy firefight near the town of Karlivka. The pro-Russian militants who ambushed them included special forces from Crimea of the former Ukrainian government’s Berkut police units. (Berkut snipers are suspected of shooting scores of Maidan demonstrators in February.)  Alfa special forces and many hired guns from Crimea also were among the attackers. Semenchenko lost six men in the fight.

You can’t cut deals with terrorists, insists Semenchenko, and you can’t negotiate with them. “Some say we should surrender the Donbas and things will quiet down but this is not the answer. If we don’t root this out here and now, it will transfer itself to other regions; new collaborators will surface.”

“Yes, we can probably negotiate something right now, but that is not the right thing to do. If we negotiate we just perpetuate the rot and the renewal of the country will drag out for tens of years, if it happens at all. These problems must be cleaned up through the end, corruption, separatism, terrorism, ineffective government.”

In what others may see as a hopeless dirty war, Semenchenko, with his can-do attitude and determination, sees an opportunity to rebuild his broken country. He has no illusions that the current situation can be fixed quickly or easily and with the arrival of fighters from Russia’s Caucasus region, including Chechnya, he sees the potential for a long war like those of Chechnya in recent decades right on his home turf. Reformatting the army, creating an effective force with strong commanders, all will take time, but then we will slowly start winning, he believes.

“The remnants of the Soviet system are broken. People who were part of that system have shown themselves to be small and cowardly, and now that the system is falling down completely we can actually build something better.”

PHOTO: Semyon Semenchenko, commander of the “Donbass” self-defence battalion, looks on during a training at a base of the National Guard of Ukraine near Kiev June 2, 2014. REUTERS/Valentyn Ogirenko ​