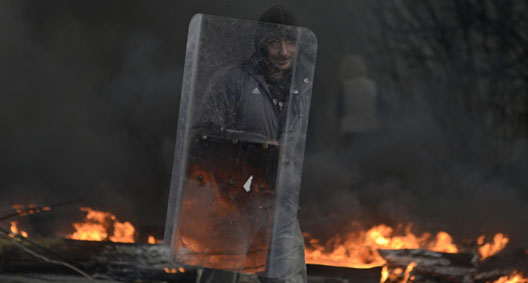 A pro-Russian protester holds a shield at a check point, with black smoke from burning tyres rising above, in Slaviansk April 13, 2014. REUTERS/Maks Levin

Amid the fighting that has spread across towns in southeastern Ukraine, local Russian- and Ukrainian-language websites and news organizations depict a battle in which squads of Russian gunmen are moving and fighting in tight, militarized formations to seize more government buildings and police headquarters. They are fearsomely aggressive, heavily armed, and well organized. The government seems none of the above. City administrations and police forces – in mid-sized cities such as Kramatorsk and Slaviansk, or larger ones such as Donetsk – appear passive at best, and seem in some cases to have virtually melted away in the face of the attacks.  Members of parliament and commentators have accused some local authorities of abetting the militants.

The weakness of Ukraine’s government was underscored hours ago, on Monday morning, when an ultimatum from Ukraine’s interim president for the attackers to surrender their weapons passed with no overt action by Ukrainian government forces.

The most riveting account of this weekend’s battle for control in the southeast comes via Ostro, an independent news website based in Donetsk.

Ostro has posted a worrisome five-minute video of armed gunmen storming the police headquarters in Kramatorsk, a mid-sized city about 50 miles north of Donetsk, the provincial capital. The video, shot by one of a clutch of local journalists or residents who were at the scene, captures a platoon of men carrying assault rifles and wearing identical, crisp camouflage fatigues with flak vests. They hustle toward the entrance to the police station, where a few men, including one uniformed police officer, not visibly armed, beg them to stop, hands raised.

“Where are you from , boys?” asks a man from off-camera. The soldiers don’t respond.

The officer and his main ally, a middle-aged man, try to talk the soldiers out of their takeover of the police station. “We’re Afghantsi,” (veterans of the 1980s Soviet war in Afghanistan), the middle-aged man says. “We have the situation here under control,” he pleads – no need for a military invasion.

“We’re for the Donetsk Republic!” another man calls out to the troops. “We’re for Russia!”

But the knot of civilians, standing by to observe, are not so friendly as some of them record the scene with cellhone cameras. “Where are you gangsters from?” a man asks.  A woman shouts “Traitors!”

After a few seconds of this, the soldiers have had enough, and shove the cop and the Afghantsi aside. They fire deafening volleys into the air as they charge into the police headquarters, pumping full-automatic gunfire in through doors and windows.

As they establish their perimeter at the police headquarters’ entrance, they turn their guns warily on the residents, mostly men, who have followed, continuing to shoot video.  A young man in a red knit cap begins shouting condemnation and obscenities at the soldiers until one man, pistol drawn, strides out to him, grabs him by the front of his shirt and shoves him down the street.  The tension is high, but the gunman does not fire the weapon he so obviously brandishes.

What Do Ukraine’s Separatists Really Want? Local Journalist Finds They’re Not Sure
From the main city of the southeast, Donetsk, Kateryna Serhatskova – a  26-year-old Kyiv-based reporter who has been covering Ukraine’s crisis for Ukrainska Pravda, the country’s most popular and influential internet newspaper – s ketches a portrait of the Russian-backed uprising in the city of 1 million people. Donetsk is the metropolitan center of the Donbas (the Donets Basin), a  gritty, densely populated region of declining coal mines, steel plants and other heavy industry.

At Donetsk’s provincial administration building, seized a week ago by separatists, these militants, too, are organized for a fight.  Mimicking the encampment of pro-democracy activists who demonstrated all winter at Kyiv’s main square, the Maidan, the Donetsk separatists have built barricades by stacking tires topped by barbed wire.  They have dug up cobblestones to be hurled in battle and set up a kitchen to feed the masked occupiers of the provincial government building.

But Serhatskova’s long report last week leaves uncertain how far the separatists’ organization and apparent unity may extend beyond the goals of seizing and holding this center of government authority.

She meets within the barbed-wire borders of the Donetsk uprising a builder and a dog breeder. In a Donbass and a Ukraine of widespread poverty and hardship, and a tiny class of fabulously wealthy business “oligarchs,” Serhatskova senses that the separatist movement has given its activists an opportunity to “move up the career ladder. For them the Donetsk People’s Republic is the dream of a new socialism without oligarchs.”

At the barricade around the provincial administration building, Serhatskova meets one of the troops – Nastya (a diminutive for Anastasia).  She’s a schoolgirl, age 16, with a black mask covering her face and a wooden club thrust through her belt. Nastya cultivates a tough-girl persona and tells how her teachers have taken her and other students from her school to nearby military camps, “where we trained like real special forces soldiers.” Nastya’s job is sometimes to carry cups of tea around to the men guarding the seized building, and sometimes to frisk women at the entrance to the building.

But she seems to have little political direction behind her desire to play G.I. Jane. When Serhatskova presses for her motives, young Nastya denies that she considers herself a separatist. “We are just ordinary people who want to live ordinary lives,” the girl tells her.

An Oligarch as Governor
Newly appointed Donetsk governor Serhiy Taruta, is a homegrown oligarch. The co-owner of a local business conglomerate invites Serhatskova and other journalists to discuss the situation with Taruta over dinner. Taruta says Donbass is being destabilized by the “family” – the clan and closest circle of former President Viktor Yanukovych, overthrown in Kyiv by the pro-democracy movement in February.  “They left with three trucks of cash having robbed the country of billions” Taruta says.

Taruta says the People’s Republic has no future. Speaking to the journalists last week, just days before the current round of military assaults, Taruta calmly assures them that platoons of “green men” won’t descend on his province.  He also is confident of the separatists’ eventual failure because splitting Ukraine would not, he says, be in the interests of Ukraine’s richest man, Donetsk industrialist Renat Akhmetov. Akhmetov has attempted to mediate with the separatists without any success.

Several Ukrainian opinion polls suggest another reason that that separatists may have little future, apart from whatever power might be seized for them by the well-organized platoons of troops.  The polls say the there is no significant grassroots support for separating from Kyiv. According to a survey at the end of March by the Donetsk-based Institute of Social Research and Policy Analysis, 66 percent of Donetsk residents want to live in a unified Ukraine. A similar poll conducted by a Kyiv-based institute, Democratic Initiatives, found 18 percent of people in Donbass supporting separatism and just 8 percent nationwide in Ukraine.

Real news of the battle for Ukraine is available on independent stations such as Hromadske TV, a public broadcaster launched amid Kyiv’s Maidan protests. The state television network, Channel 1, gives several hours daily to Hromadske, although oddly, Channel 1’s website might lead us to imagine that Ukraine these days is calmly going about business as usual. No sign here of a crisis in the country. The top stories tell of spring allergies, a folk music program, the achievement of a singer trying to make it to the Eurovision song contest and Army News, a program that covers the tribulations of military personnel.  No mention there of disciplined, anonymous platoons of Russian commandos seizing power, town by town, in the Donbass.