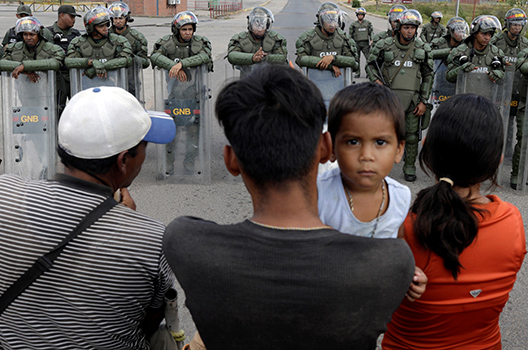 The crisis in Venezuela is heading toward a showdown between Nicolás Maduro’s regime and the US-backed opposition, led by Juan Guaidó, this weekend.

Here’s a quick look at what’s going on:

Atlantic Council analysts—Jason Marczak and Paula Garcia Tufro, director and deputy director, respectively, of the Adrienne Arsht Latin America Center—discussed the significance of these developments in an interview with the New Atlanticist. What follow are excerpts from the interview.

Q: How will the opposition distribute humanitarian aid to Venezuelans?

Tufro: Approximately eighty members of the National Assembly have joined a caravan and mobilized Venezuelan citizens to go to the border. Hundreds of thousands of Venezuelans have not only signed up to help bring the assistance in, but to create a human chain to distribute the aid in Venezuela.

The ability for the aid to get across into Venezuela is contingent on the armed forces, paramilitaries, and other elements allowing that assistance to move freely and safely across Venezuelan territory. This is not a foregone conclusion.

Marczak: The Guaidó government created a signup sheet for all these hundreds of thousands of volunteers. These volunteers, arriving at the border on the Venezuelan side, as well as additional Venezuelans who are in Cúcuta, will bring the aid into Venezuela. Once that assistance comes in the key will be to be able to move the food and medicine from the border into Venezuela without it being confiscated by the military or stolen by criminal groups. Getting some of this assistance across the border is step one; step two is distribution; and step three are the longer-term implications.

Because the Colombia-Venezuela border is porous, even though all bridges are being blocked, people can still move across the border outside of formal checkpoints. The key will be if any of the bridges open up to allow aid in. That will show units of the military are becoming more pragmatic as Maduro is increasingly boxed in.

There is also a tense situation unfolding on the border with Brazil after the shooting [on February 22] on the Venezuelan side. Brazilian President Jair Bolsonaro has been incredibly resolute in his determination that Brazil will play a pivotal role in helping to bring assistance across the border.

Q: What are the implications of the aid getting into Venezuela? Would it weaken Maduro?

Tufro: If the bulk of assistance makes it in it certainly will be a blow to Maduro because it will effectively mean one of three things: either the military switched sides, jumped on board and help carry the boxes in; or somewhere in the middle, stepped aside and allowed some aid to go through; or fully held the line on the border and blocked the humanitarian assistance from entering Venezuela.

In the first case, the implication of having the military switch sides in large numbers is a significant public blow [to Maduro] who called for the armed forces to block the aid. In the second case, if the armed forces let some aid in a few different scenarios could unfold, each with different implications for Maduro. If the aid is allowed to come in, the armed forces could seek to take control of the aid or let it pass and ensure its safe passage and distribution by the interim government, with the former serving to bolster Maduro and the latter marking a big win for Guaidó. It is also possible, although highly unlikely, that the current standoff at the border results in mass defections and a pledge of support for Guaidó, which would deal the strongest blow to date against Maduro and potentially mark the beginning of the end of the Maduro regime.

It is important to note that until or unless the opposition gains control of the security forces and territory in Venezuela, getting the aid across the border is but a first step toward ensuring that those most in need receive that critical assistance.

Marczak: Guaidó right now has the legitimacy of fifty-plus countries—with the number of democracies around the world recognizing him continuing to grow by the day. He has to show that he has power. He needs to show that his power goes beyond getting people into the streets because frankly getting people into the streets is not solving Venezuela’s issues. People are sick of politics and they just want their lives to improve. Guaidó has staked his nascent presidency on his first key promise to the Venezuelan people: he is going to help alleviate their suffering.

This is a pivotal moment for Venezuela. If Guaidó can show he can bring assistance across the border and that assistance can then make it to the people that is going to be a huge blow to Maduro.

There are so many scenarios which could unfold over the next few days and weeks. Beyond the black-and-white scenario of  the military aligning with or against aid, another option is that certain units of the military allow the aid in and others continue to stop it. The military is not a monolithic force. There is so much infusion of criminality and different allegiances in the units that one course of action is not necessarily going to extend to all those guarding the border.

Anxiety and tension continue to build as well. One concern: trigger-happy soldiers who could intentionally or unintentionally unleash waves of violence on the border in the midst of great confusion. If an errant gunshot comes across the Brazil border, how does the Brazilian military respond? There are so many opportunities for miscalculation.

Q: Almost a month since the United States recognized Guaidó as the interim president of Venezuela have you seen any signs of Maduro weakening—specifically in terms of losing the military’s support?

Tufro: We have seen some high-level defections in the last few days, but in terms of scale and numbers we haven’t seen a huge deluge in the form of mass defections. We are all looking closely for signs of a significant crack. So far, the armed forces have by and large continued to hold the line.

Q: With so much at stake for both Maduro and Guaidó, what are the implications for Guaidó if he can’t get aid in?

Tufro: The implications for Guaidó are significant. His legitimacy to date has been largely a result of his ability to mobilize popular support. Those popular masses are now inspired and looking for concrete results, which he has promised. The longer he is not able to deliver on that promise [of humanitarian aid] the less likely it is that these masses will continue to go out into the streets.

Maduro has found other ways to cling on to power. Just this week, 7.5 tons of assistance financed by Russia was delivered to Venezuela utilizing existing multilateral mechanisms that are already on the ground. If this effort by the opposition fails at the border, we could see a situation where Maduro will be out in the streets of Venezuela distributing aid, while Guaidó will be sitting on the border with Colombia waiting with hundreds of tons of aid to get through a hardened border.

The scale of the assistance from Russia and that which is on the other side of the border, while critical, is a drop in the bucket toward addressing the scale of the humanitarian crisis in Venezuela. This weekend is critical. If the opposition and Guaidó are successful in getting assistance in, it could pave the way to establishing a humanitarian corridor.

Marczak: Guaidó, on behalf of the Venezuelan people, will get aid in. There is too much at stake for at least some aid to not trickle across the border. In crossing the border [on February 22] and appearing alongside the presidents of Colombia, Chile, and Paraguay, Guaidó—and Latin America’s major democracies—again showed that failure is not an option. An impasse is unsustainable. Maduro is increasingly boxed in and cash-deprived and will be hard pressed to keep the loyalty of the military when he cannot pay off the top brass or keep soldiers in check through meager handouts.

If Maduro was serious about delivery of aid, it should have come in years ago. Russian assistance does not even come close to what is needed. It’s not serious and far too little and too late.

Q: What is the incentive for the military to give up its control of aid channels?

Tufro: The incentive would be if they think Maduro’s days are numbered and that the future of Venezuela will be controlled by the opposition. They will be making a calculation that they stand to more to gain or stand to lose less from taking whatever amnesty deal is being offered and having a stake in the future of Venezuela, than from standing by Maduro and having the United States and Venezuelan authorities go after them for any corrupt or illegal practices they have been involved in.

Q: Does the overt US response to this crisis risk tainting Guaidó in a part of the world where being too closely associated with the United States is not generally viewed as a positive thing?

Marczak: This is not a US-led response. This is an international effort. The United States just has the resources, given the proximity and given the channels that we have, to be able to play a fundamental role.

Tufro: Canada has actually pledged $53 million, so there is a bigger number out there, it just doesn’t get talked about as much. [Editor’s note: The United States has pledged $20 million in assistance.] The risk of that narrative gaining traction increases, irrespective of what the numbers bear out, if the assistance doesn’t get through and if the opposition [and the United States] chose not to explore other channels through which to bring the humanitarian assistance in if this effort fails. We’re not there yet.

There are other avenues that have not yet been explored and the opposition could and should explore them. They could, for instance, make a public appeal to the United Nations whose mission includes coordinating global responses to critical economic and humanitarian challenges.