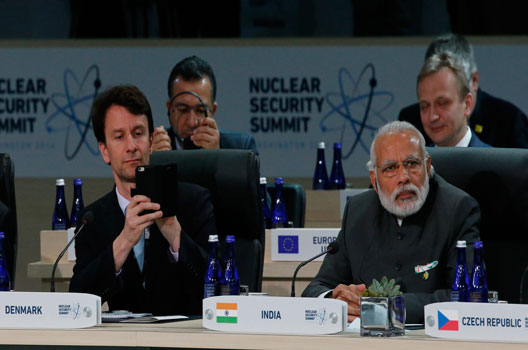 From left: A member of Denmark's delegation takes a picture with his phone while seated next to India's Prime Minister Narenda Modi at the start of the second plenary session of the Nuclear Security Summit in Washington April 1, 2016. (Reuters/Jonathan Ernst)

This article is part of a series.

India’s recent drive to become a full member of the Nuclear Suppliers Group (NSG) is part of a two-pronged attempt by New Delhi to revive a moribund Indian civilian nuclear industry. Many, especially in India, have portrayed it as a quixotic act of diplomacy by New Delhi because they have not understood the underlying context.

The first prong of this revival plan comprised a series of measures designed to overcome the problems created by a flawed nuclear liability law that was implemented in 2010. The second prong has been to ease the ability of Indian nuclear firms to carry out their business—with a long-term view toward India becoming an exporter of nuclear components and reactors. NSG membership is seen as a crucial element for creating the right type of business environment.

The present impasse in India’s civilian nuclear industry began with the passage of a well-intentioned but poorly-drafted nuclear liability law. The law was designed to simplify the process by which victims of a nuclear accident in India would receive compensation.

However, the law’s shoddy drafting and its expansion of liability to incorporate the makers of nuclear reactor components, as opposed to the international norm of placing all liability on the reactor operator, plunged the industry into crisis. Because of the ill-defined levels of liability, Indian manufacturers of nuclear components—notably Larsen & Toubro and Godrej—found it impossible to insure their contracts. In turn, they stopped providing parts even to existing reactors in India and refused to participate in new reactor projects. Foreign reactor makers—especially certain private firms in the US, Japan, and France— also declined to sell reactors to India.

Because international supply chains comprise dozens of countries and thousands of components, India’s civilian nuclear industry ground to a halt from 2010 onwards. According to industry representatives, the country’s sole reactor operator, the Nuclear Power Corporation of India, failed to secure a single bid for any component contracts in the years that followed.

The Modi government attempted to resolve this problem in 2014, which partly reflected the prime minister’s strong concerns about climate change and a recognition that India needed a renewable energy source for baseload demand. Nuclear energy best fit the requirement.

Over the past two years, New Delhi has sought to undo the damage of the liability law but in a manner that avoids having to go back to Parliament for a new vote.

It has done so through four separate measures—most of them carried out in 2015.

First, New Delhi administratively interpreted the law in a manner that limited suppliers’ liability. Second, it set up a 15-billion-rupee insurance pool for the nuclear industry backed by a consortium of twelve Indian insurance firms. Third, India ratified the Convention on Supplementary Compensation for Nuclear Damage, an international fund for helping countries that suffer a major nuclear accident. Finally, it signed a civil nuclear cooperation agreement with Japan. This agreement was particularly important as Japanese nuclear firms are at the center of the reactor supply chain and are essential to the cores of the largest and most advanced commercial reactors. Without such an agreement, buying from or even partnering with most global nuclear manufacturers would be impossible.

The liability repair job was about restoring the Indian nuclear industry to its status before 2010. The other prong of Modi’s nuclear revival plan is to make India a hub for the manufacture and export of nuclear components and, in time, entire reactors.

This was an original part of the Indo-US nuclear deal of 2008. But, it was put aside following India’s economic problems post-2008 and then cut entirely from the deal following the liability law’s passage.

India’s nuclear engineering firms say they can make 60 to 70 percent of the components of most standard reactors. More importantly, they can do so at 20 to 30 percent less than prevailing global prices. Industry representatives say that they now need to partner with foreign firms to build 1000-plus MW reactors with modern safety features in India. Following that, they would be in a position to integrate themselves into cross-border reactor supply chains. With demand for nuclear reactors flat-lining in the West, many Asian and Western firms are interested in such ventures.

A sign that all this effort is paying off is the announcement in June this year by Westinghouse-Toshiba that it would begin site work in India for six reactors.

The NSG increasingly came to the fore as India’s efforts to re-integrate itself into international nuclear commerce started to show signs of success.

While NSG membership is not essential to India’s civil nuclear aspirations, it would make such plans much easier to accomplish.

Though India earned an exemption from NSG sanctions thanks to the efforts of US President George W. Bush’s administration in 2008, this did not automatically give it access to nuclear technology among NSG members. As the NSG is an informal technology regime that does not impose binding treaty obligations on its members, the 2008 exemption did not necessarily change domestic-level export control regimes.

India has already painstakingly negotiated civil nuclear agreements with eleven of the 48 NSG countries to get around this. However, many members baulk at having to change their domestic rules. The hold up is the unique status India has in the nuclear world: it is exempt from NSG sanctions but it is not signatory to the Nuclear Nonproliferation Treaty. Others have objected to India’s refusal to sign the Comprehensive Test Ban Treaty.

On top of this, individual companies have legal and compliance issues with regard to India’s nuclear status. The NSG could, in theory, vote to reverse the exemption it granted. A minor precedent already exists: in 2011, the NSG issued a ban on enrichment and reprocessing technology to countries that were non-NPT signatories, seemingly reversing part of the 2008 exemption. All of these concerns are doubled for countries that may import Indian-made nuclear components.

The simple answer around all this, it was realized, was for India to become a full-fledged NSG member. Membership had an additional benefit of reducing the risk premium regarding doing nuclear business with India, something that would help offset the additional costs that had been imposed by the liability law. An Indian foreign ministry statement said of NSG membership: it “creates a climate of predictability with regard to rules for nuclear commerce with India, giving both Indian and foreign companies the confidence to commit the resources that will be needed for the expansion of nuclear power in India.”

The first attempt for membership, during the NSG plenary in Seoul in June of 2016, failed when China vetoed the membership vote. New Delhi hopes to make a second effort in November this year. If India does not make NSG membership, its nuclear power generation ambitions can still be realized but its larger vision of becoming a nuclear manufacturing hub would be less certain.

Pramit Pal Chaudhuri is foreign editor of the Hindustan Times and a senior associate at Rhodium Group, leading the consulting firm’s India projects.