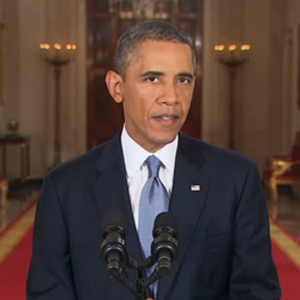 After watching President Obama’s speech Tuesday night, some of the Atlantic Council’s experts weighed in with initial reactions.

Atlantic Council Vice President and Director of the Brent Scowcroft Center on International Security Barry Pavel wrote in an earlier post this evening that “close US allies and partners in dangerous regions around the world, and the WMD-armed adversaries who threaten them, all have drawn lessons from the US backing down from militarily enforcing the publicly drawn red-line announced by the President of the United States last year.” His full post is here.

Fred Hof, senior fellow in the Rafik Hariri Center for the Middle East, served as special advisor for transition in Syria for the US State Department. Hof has written extensively about Syria on our MENASource blog. He had this to say:

In his Syria speech to the nation, President Obama may have artfully recovered some of the freedom of action he gratuitously and even impetuously yielded to Congress. By so doing, he may have finessed the demand of Russia’s Putin that the United States explicitly refrain from holding the threat of military action over Syria’s head while also canceling (in the name of postponement) the possibility of a disastrously negative vote by the Congress.

The president asked Congress to postpone its vote on authorizing a military operation, so that he can check the bona fides of the “diplomatic path” offered by Russia.  He reiterated that he possesses the authority, as commander-in-chief, to order military strikes, but that he “believed [note: past tense] that it was right in the absence of a direct or imminent threat to our security to take this debate [note: not “decision”] to Congress.”  Moreover, he has “ordered our military to maintain their current posture to keep the pressure on Assad and to be in a position to respond if diplomacy fails.”  It is perhaps noteworthy that the foregoing sentence did not end with the words “and if Congress grants me the authorization I have sought.”

The sentences linked together in the preceding paragraph come from different sections of the speech.  Their effect, however, might be to hold over the head of Bashar Al Assad a sizable hammer that hypothetically might be dropped by the president without reference to Congress in the event that diplomacy fails.  And yet the absence of a Congressional vote formally endowing the president with the authority to conduct military operations makes it somewhat more difficult for Russia’s Putin and Syria’s Assad to claim they are being asked to deliver something under military duress.  Congress will, after all, postpone the authorization matter indefinitely while the president runs to ground the putative “diplomatic path.”  Who could possibly object to that?

Meanwhile, the president would indeed have time to determine whether or not the Russian proposal holds water; time during which he could build on his solid speech performance in the court of public opinion and keep open the option of returning to Congress if he believes he can gain “yes” votes in both houses.  Assuming, however, that the passages cited above were drafted consciously and purposefully, the president may have restored some running room for himself to act autonomously if he deems it necessary, while simultaneously deflating the ability of Putin and Assad to scream about unfair military pressure.


Jeff Lightfoot, deputy director of the Scowcroft Center, adds a different perspective, asserting that Obama’s diplomacy puts pressure back on Moscow and Damascus:

President Obama’s September 10th remarks to the American people on Syria failed to acknowledge the lack of international support for US military action to punish Syrian president Bashar al Assad. Obama recognized domestic opposition to attacking Syria, while using the crutch of American exceptionalism to argue for why the United States must punish the violation of international norms by dictators when others are willing to turn their heads.

But after the Iraq war debacle, the 2008 financial crisis, and the NSA scandal, fewer countries are willing to join the United States in its quest to enforce global rules of the road through military force. Obama’s failure to acknowledge the lack of international support for American military intervention downplays the risks of US military action and makes more imperative that the United States exhaust all possible diplomatic outcomes before resulting to the use of force.

The prospect of a Russian-brokered, UN-verified Syrian disarmament of its chemical weapons offers Obama a lifeline from his domestic and international isolation. Just two days ago, Obama was likely to face a humiliating defeat to gain Congressional authorization for war and could count only on France as a reliable military ally in punishing the Syrian regime. Many countries in the G20 were more focused on opposing another unilateral American military intervention in the Middle East than in condemning Assad’s use of chemical weapons on his own people.

Obama’s sudden choice to pursue a diplomatic outcome turns the tables and puts the pressure back on Syria and its Russian benefactor to demonstrate the sincerity of their motives. Russia’s plan to assist in the international dismantlement of Syria’s chemical weapons arsenal faces long odds of success. Indeed, Moscow is unlikely to support France’s proposed UN Security Council Chapter VII resolution to support the diplomatic process with the threat of international force. Yet diplomacy backed by force would be an option worth pursuing in part because it has received wide support and endorsement from the international community and puts the West back on offense with Russia and Syria. If the Russian-brokered diplomatic solution fails, the United States will have a stronger and more legitimate case to make to a skeptical domestic and international community that it has pursued all peaceful outcomes prior to using military force.

President Obama is correct to test the diplomatic waters to avoid a war that the American people and the international community largely oppose. The odds of a diplomatic breakthrough may be slim, but the likelihood of success of an ill-defined military strike in the midst of a savage civil war is no better.


Faysal Itani, visiting fellow with the Hariri Center, has commented throughout this crisis on the regional reactions. He weighs in from that perspective on President Obama’s message:

As American audiences ponder and analyze the nuances and subtleties of President Obama’s latest speech on Syria, the parties to the civil war are drawing their own conclusions.

Unlike its crude, unsophisticated handling of domestic issues, the Syrian regime has mastered a foreign policy based on reading rivals’ strengths, weaknesses and political sensitivities – all of which were laid bar in tonight’s speech, and the clearest of which was US ambivalence towards a rebel victory against Assad. It is unlikely that the recent Russian initiative will deprive Assad of his chemical arsenal, due partly to the difficulty of the task but mostly to the duplicity of the Syrian regime, which is patient enough to outlast a feeble US commitment to punishing it for using chemical weapons.

But the Syrian opposition neither sought nor expected a disarmament of the regime’s chemical weapons. What it has called for and desperately needs is a firm, consistent US commitment to defeating the regime, in the form of military and financial support for rebel groups. Instead, it was treated to a clear insists from a claimed ally that the US had no interest or intention to decide the war’s outcome in the opposition’s favor. The opposition must have been doubly confused by the president’s appeal to morality in support of US action – a morality he presumably does not feel justifies decisive US support for their cause of overthrowing Assad.

Tonight, both President Obama and the Syrian regime dodged a bullet, but the Syrian opposition took a point-blank hit. Seasoned observers of US politics can read any number of messages between the lines of the president’s speech. To the Syrian opposition, however, the message is clear: You’re on your own.