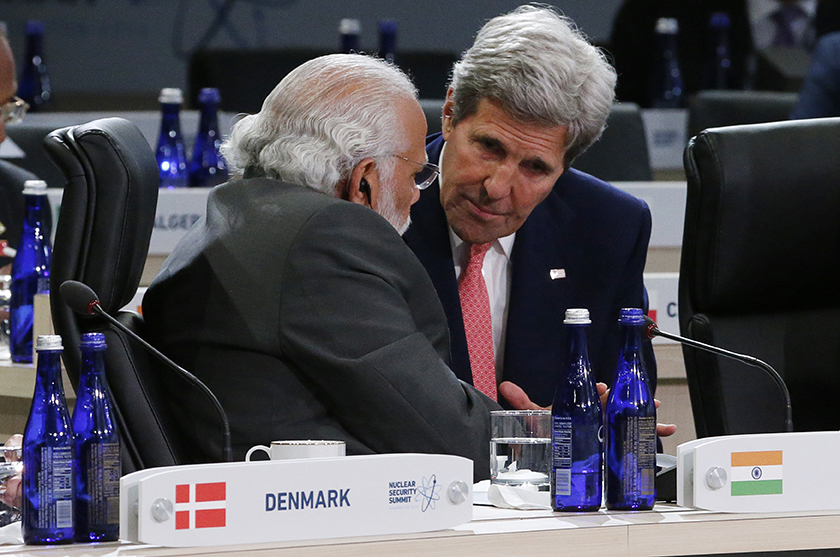 Indian Prime Minister Narendra Modi (left) spoke with US Secretary of State John Kerry at the second plenary session of the Nuclear Security Summit in Washington on April 1. (Reuters/Jonathan Ernst)

Subsequent to the setback India suffered to its effort to join the Nuclear Suppliers Group (NSG) at the group’s Seoul plenary in June, the Atlantic Council’s South Asia Center commissioned a series of essays on India and its integration into the nonproliferation regime.

This initiative seeks to engage academics, policy makers, and analysts on some of the challenges and opportunities if India were to be admitted into the NSG. It analyzes India’s level of participation in the expansion of the global nonproliferation regime and the regional rivalries that propel or attenuate that effort.

This article is the first in a series.

The twenty-first session of the Conference of the Parties to the United Nations Framework Conference on Climate Change that took place in Paris in December of 2015 reached a historic consensus on a critical global issue. Even so, studies suggest that despite the carbon reduction goals announced in Paris , we will still see a 2.7–3.7°C temperature increase when compared with preindustrial levels. This is an improvement over the business-as-usual trends, which would have led to 4–5°C increase, but falls short of the goal to limit warming to below 2°C.

Much more needs to be done. While the growth of electricity generation capacity to meet development needs of much of the world is unavoidable, shifting electricity generation to non-fossil fuel energy sources is an urgent necessity. Emphasis on renewable energy is only a partial answer in this context. Nuclear energy—the only non-fossil source able to meet both base load energy demand and sustainability requirements—must be implemented on a large scale to meet worldwide carbon-reduction goals.

Today, the risk that climate change poses to humanity is far greater than that posed by nuclear weapons. Nuclear technology is not being adequately considered—particularly in developing countries where energy consumption is expected to drastically increase. Of the 444 operating nuclear power reactors in the world, there are only seven in Latin America, two in sub-Saharan Africa, and only one across the Middle East and South Asia, excluding India and Pakistan. It is worth recognizing that since the Fukushima disaster in Japan in 2011, thirty new reactors are now under construction and thirty-one power reactors have been connected to the grid. These reactors have been built despite public concerns about the risk of future disasters. The nuclear energy industry has learned through its experiences with the Chernobyl and Fukushima accidents, and has continuously improved its safety standards and measures.

Of eight countries (Belarus, China, India, Pakistan, Russia, South Korea, the United Arab Emirates, and the United States) that are constructing new nuclear power plants post-Fukushima, only one is a new player in nuclear power. As of February, there were more than forty-five countries actively considering a nuclear power program, according to the World Nuclear Association. While there are a large number of emerging economy countries with growing energy needs, their adoption of nuclear power to combat climate change would depend on the availability of cost-competitive systems that are readily deployable with the assurance of safety and security. Issues related to waste management could also pose concerns. Countries need to be able to adopt proven reactor systems that can satisfactorily address these concerns.

India has long pursued a self-reliant nuclear power development program to address energy needs on the subcontinent. With a population of more than 1.3 billion people and one of the fastest growing economies in the world, India’s energy needs are very large and rapidly growing. Fossil-fuel sources constitute the bulk of India’s current energy supply, but there is a determined effort underway to transition to non-fossil energy. Nuclear energy is undoubtedly a major part of this transition.

In 2008, members of the NSG—an organization that seeks to prevent nuclear proliferation by controlling the export of materials, equipment, and technology that can be used to manufacture nuclear weapons—adopted a policy statement on civilian nuclear cooperation with the Indian nuclear program. All elements of the Indian civilian nuclear liability regime are now in place. India has conveyed its carbon-reduction goals to the United Nations following the Paris summit. These goals include achieving forty percent cumulative electric power capacity from non-fossil fuel sources by 2030 with the help of technology transfers and international investment, including from the Green Climate Fund. New Delhi’s goal is to realize 63,000 megawatts of installed nuclear capacity by the year 2032, if supply of fuel can be ensured.

Using innovative sources in lieu of traditional nuclear energy sources, such as thorium—of which India holds more than twenty-five percent of the world’s reserves—can lead to sustainable and safe adoption of nuclear energy as a viable option to meet the challenges of climate change.

The NSG should find ample opportunity rising out of India’s research and development efforts. In fact, of the forty-eight NSG member states, twenty-three do not have nuclear power plants. India, a country that has an impeccable nonproliferation track record, could share its experience in nuclear technology and work together with other NSG members to reduce the risk of nuclear proliferation, all while spreading nuclear power to meet worldwide energy needs. The NSG should, therefore, admit India as a member state.

Anil Kakodkar was chairman of India’s Atomic Energy Commission and secretary to the Government of India, Department of Atomic Energy, from 2000 to 2009.