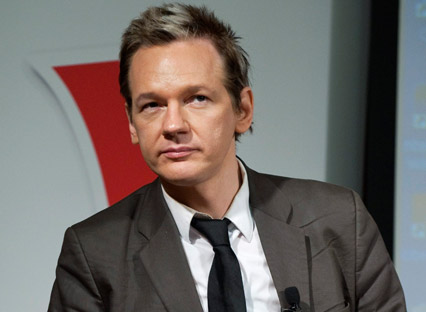 Undressing electronically with eyes wide shut is what the world’s only superpower has done in a global striptease worthy of the Marx brothers but hardly a word has been written or spoken about the motives of the WikiLeaks’ chief leaker.

Australia’s 39-year-old Julian Assange was 19 years old when the Cold War ended. His parents were well-known on the left and ran a touring theater company. His mother remarried in 1979 to a man who belonged to a controversial New Age group. And in the late 1980s, Assange was a member of a crack hacker team that called itself "International Subversives."

In 1991, he was the subject of a raid on his Melbourne home by the Australian Federal Police. And last September, Assange was placed No. 23 among "The World’s 50 Most Influential Figures" by Britain’s New Statesman, a magazine on the far left of the media spectrum. He is under consideration by Time magazine as its "Person of the Year."

Australian acquaintances say he was bitterly disappointed by the outcome of the Cold War with a resounding global victory for the United States and its allies. Assange then began identifying with the defeated "progressives," from the pensioned off millions — on starvation stipends — of the old Soviet nomenklatura, to the innocent dupes who never realized that the World Peace Council was a KGB-controlled organization (documented in post-Cold War Russian files that opened briefly before the KGB’s successor organization sealed them again).

There are tens of millions in both the Third and First Worlds (e.g., former Communist party members and their "progressive" fans) who now firmly believe the "evil empire" is the United States with what even leading Wall Streeters — e.g., Pete Petersen — call "animalistic and carnivorous capitalism."

The post-Cold War generation of "progressives" — the word that once gave Communists respectability the world over — likes to cite Karl Marx’s prediction that capitalism would eventually sow the seeds of its own destruction. They also welcome anything that weakens the United States. Their new hero is Assange.

The world’s most repressive regimes — e.g., Cuba, Venezuela, Iran, North Korea — are the least of Assange’s concerns. The fount of all evil, as he sees the world, is the United States.

WikiLeaks’ master leaker, who clearly relishes anything that hurts the United States, is a throwback to Vietnam-era haters who despised the U.S. government and happily smeared America’s image throughout the world.

Under the global barrage of hundreds of thousands of WikiLeaks, American diplomats will now be regarded with suspicion, as so many men and women taking orders from their real masters — the CIA. Yet another throwback to the Cold War.

Assange’s media partners in the Western world were selected with one yardstick: impeccable liberal credentials. The Washington Post wasn’t liberal enough — and got squeezed out in favor of The New York Times, along with France’s Le Monde, Britain’s Guardian, Germany’s Spiegel and Spain’s El Pais.

An Internet activist and journalist, Assange studied physics and mathematics as a student, then went on to develop a reputation as a master hacker and computer programmer before anointing himself "Editor in Chief" of WikiLeaks. The harm he has now done to the United States is considerable.

On the PBS’s "NewsHour," Zbigniew Brzezinski, President Jimmy Carter’s national security adviser, said: "Who cares if Italian Premier Berlusconi is described as a clown? Most Italians agree with that. Who cares if Putin is described as an alpha dog? He probably is flattered by it …" More serious, he said, are references to a report by our officials that some Chinese leaders favor a reunified Korea under South Korea. This is clearly designed to embarrass the Chinese and the U.S. relationship with them.

It could even tip the scales in favor of war in the Korean Peninsula. A frail and ailing Kim Jong Il could, for instance, decide that rather than slip gradually under South Korean and American domination, he will use his 11,000 artillery tubes to flatten Seoul first.

Equally embarrassing is the disclosure that the king of Saudi Arabia and other Sunni leaders have been saying in highly confidential conversations they favor the U.S. and/or Israel bombing Iran’s nuclear installations now rather than wait for the Shia theocracy to develop a deliverable weapon. Such a revelation can only undermine the authority of the Persian Gulf’s ruling families.

Perhaps the most egregious in the WikiLeak dump of hundreds of thousands of classified and secret cables was relations with Turkey — and the description of Ahmet Davutoglu, Turkey’s foreign minister, as exerting an "exceptionally dangerous" Islamist influence on Prime Minister Recep Tayyip Erdogan.

Davutoglu and other governing AKP leaders were also said by ranking U.S. diplomats "to have scant understanding of how their foreign policy will be understood outside of Turkey because their knowledge is handicapped by their Turkey-and-Islam-centric vision of how they want the world to operate."

The same secret cable says Erdogan is incapable of viewing Islamist groups as terrorists. "Hamas and Hezbollah," he is quoted as saying, "are the result of Western policies gone awry, a response from desperate people — not truly terrorists." Most European leaders would agree.

Erdogan is accused of "unbridled ambition stemming from the belief God has anointed him to lead Turkey." The prime minister’s "authoritarian loner streak" contains "a distrust of women," which explains why they’ve been excluded from any prominent role in the governing party.

Davutoglu lost no time flying to Washington to make the rounds, including some tough questioning on Capitol Hill. His message: Turkey is determined to be friends with everyone, from Israel to Iran.

Whatever a U.S. diplomat hears or says in conversations with local government officials and colleagues from other countries now runs the risk of being published and read by thousands from dozens of countries. Such conversations are bound to be governed by the fear of public exposure. America’s diplomatic relations with friends and allies, Assange will be pleased to hear, have been severely damaged. Not permanently, but at least for a while.

Some say Assange doesn’t seem to understand that the United States is still the behind-the-scenes catalyst for resolving tough regional and global issues. And that he’s now made it harder to resolve critical issues around the world by making the United States a less-trusted interlocutor.

The flip side of the coin says "International Subversives." They seek global chaos to spawn a New World Order. It’s also called the totalitarian temptation that has existed from time immemorial.