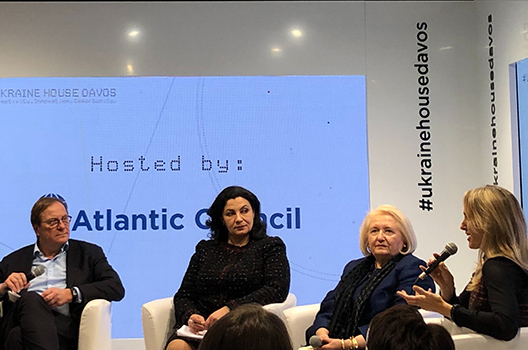 “There is a war going on in the middle of Europe. A very hot war,” according to Ivanna Klympush-Tsintsadze, Ukraine’s vice prime minister for Euro-Atlantic integration, who urged policy makers to confront this “uncomfortable truth” about Russian aggression.

Speaking in a panel discussion hosted by Ukraine House Davos in Davos, Switzerland, on January 22, Klympush-Tsintsadze said: “Ukraine needs to be given a hand, a shoulder, or some engagement to help against Russian aggression, especially in the year of elections.” Ukraine is gearing up for presidential elections on March 31.

Atlantic Council President and Chief Executive Officer Fredrick Kempe, who moderated the discussion, said Ukraine’s fight against Russian aggression “goes way beyond Ukraine’s borders in terms of importance, not only for Europe and the region but also the world.”

“At its core,” Kempe continued, Ukraine’s struggle “is about the future of a Europe, whole and free.”

Russian aggression toward Ukraine has been marked in recent years by the annexation of Crimea in 2014, support for separatists in eastern Ukraine, and, more recently, the capture of Ukrainian naval vessels and sailors in the Kerch Strait.

Klympush-Tsintsadze and Kempe were joined in the discussion by Ieva Ilves, a former first lady of Estonia and current head of the Latvian Ministry of Defense’s National Cybersecurity Policy Coordination Section, and Melanne Verveer, the executive director of the Georgetown Institute for Women, Peace, and Security and the United States’ first ambassador-at-large for global women’s issues from 2009-2013. Ukraine House Davos is organized by the Ukrainian Venture Capital and Private Equity Association, the Western NIS Enterprise Fund, the Victor Pinchuk Foundation, and Horizon Capital.

“Ukraine is and has to remain European,” Ilves said, but agreed with Kempe that the threat is much larger. “What worries me on a global scale,” she explained, “is the fact that Russia can manipulate open, liberal democracies. That it can manipulate people’s heads and hearts in a way that they can’t notice.” Moscow’s use of disinformation and cyberattacks is something the Baltic states have seen as well as “we have always seen that every sensitive political issue. . . have been accompanied by certain activities in the digital realm,” according to Ilves.

With such widespread exposure to this threat, “Ukraine should not be struggling alone” against attacks like these from Russia, Ilves said.

The United States is “sending mixed messages” on its support for Kyiv, Verveer said, as US President Donald J. Trump’s statements implying potential support for recognizing Russia’s annexation of Crimea have come alongside consistent US diplomatic and military support for Ukraine. While the administration may not appear united, Verveer argued, Ukrainians should take heart that support for Ukraine remains “strong on both sides of the aisle.” Still, Washington can do much more, according to Verveer, who added that “we need to be there with more positive support on the humanitarian side.”

Europe should help Ukraine, Klympush-Tsintsadze said, because of the fervent desire of Ukrainian citizens to remain part of European society. “Ukrainians are the last romantics in Europe,” she said, as at a time when many European populations are openly doubting the value of the European Union, “Ukrainians are taking the European flag to the streets.” Rather than being a burden for Europe, Klympush-Tsintsadze said, “Ukraine can give a new breath to the European project and moreover the Western civilization project.”

Klympush-Tsintsadze  also warned Europe against approving the Nord Stream 2 pipeline, which would see Russian gas pumped directly into Germany and Central Europe, as Moscow will use the project “as leverage over Europe, as it has been using it for decades over Ukraine.”

Despite some bumps in the road, Klympush-Tsintsadze praised the solidarity Ukraine has seen from its European neighbors, saying that while Russian President Vladimir Putin’s moves may have caught some people by surprise, “it is the unity of support from Europe that is catching Russia by surprise.”

“While it is crucial to focus on the Russian threat,” Kempe said, “Ukraine must focus internally as well.” Ukraine’s territorial sovereignty must be preserved, but at the same time Kyiv must complete “the domestic reforms that will make Ukraine compatible with EU norms and draw further investment to grow the economy. . . and make the country less easy to undermine from the outside,” Kempe said.

For Verveer, this means taking significant action to help grow certain sectors, such as “renewables, IT, and even enhancing the productivity of agriculture,” to make the Ukrainian economy competitive in the 21st century global economy. But in addition to these economic reforms, Verveer said, Ukraine must also “ensure the leadership and the engagement in significant ways of [the] female population in the country.”

“Women drive economic growth,” Verveer explained, adding that “in those countries where there is greater equality—the gap is narrow between men and women—those countries are far more economically competitive and far more prosperous.”

Klympush-Tsintsadze highlighted the significant progress Ukraine has made in the last few years on female participation in politics and society, noting that the 12 percent representation of women in parliament—while still too low—“is the highest number we have ever had, and I am sure that will only grow.” She also noted new legislation encouraging political parties to have women make up at least 30 percent of their local candidates, as well as the lifting of more than four hundred professional restrictions on women, which banned their participation in jobs deem “too dangerous” for them.

Following a surge in sign-ups after attacks from Russia, 10.6 percent of the Ukrainian armed forces are women, Klympush-Tsintsadze noted, nearly identical to the NATO average (10.9 percent). Verveer echoed the optimism around Ukraine’s ability to make strides, noting that “there has been a lot of progress” on women’s participation in local governments and on reporting of violence against women.

While Kyiv has taken significant strides, Kempe said, “the international community must continue to coordinate efforts to support Ukraine’s development, setting a path towards security and prosperity.”