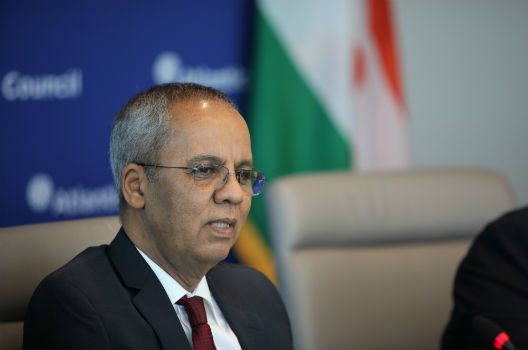 A nearly $450 million investment package from the Millennium Challenge Corporation—an independent US foreign aid agency—for Niger will empower farmers and bolster transit infrastructure in the West African state, improving the livelihoods of more than 3.9 million Nigeriens, according to Niger’s prime minister, Brigi Rafini.

The Nigerien government and the Millennium Challenge Corporation (MCC) on July 29 enacted the investment compact—the first of its kind for Niger.

“The main problem in Niger is agricultural production and we want to focus, in particular, on the livelihoods of agriculturists and farmers—and that is at the very heart of the [MCC] program,” Rafini said at the Atlantic Council in Washington on July 28.

“This program will be of great benefit to Niger… [and it] will significantly improve the living standards of the Nigerien population,” he added.

The nearly $450 million investment agreement defines a wide-ranging partnership between the United States and Niger. Irrigation system improvement, road construction, natural resource management policies, and training programs are core areas that the compact will address. The compact also calls on Niger to maintain a commitment to good governance and respect rule of law.

Niger has endured extended periods of political instability since it gained independence from colonial France in 1958. The country has stabilized following a 2010 coup d’état in which the military established a transition council, implemented a new constitution, and ultimately held elections that were seen as transparent and fair by the international community.

Boko Haram—a terrorist organization affiliated with the Islamic State of Iraq and al-Sham (ISIS)—has operated across Niger, Nigeria, Chad, and Cameroon since 2010. The group has forced nearly 2.3 million people to flee from Nigeria into neighboring Niger and Chad since May of 2013. Humanitarian aid efforts from the United Nations (UN) in the region—in particular Borno state in northeastern Nigeria—have been suspended amid continued attacks by Boko Haram militants on Nigerian military and UN convoys.

Despite the group’s stronghold in the neighboring northeast of Nigeria, Rafini noted that efforts to stabilize the conflict in Niger have been successful.

“At this stage, populations in Niger are actually starting to feel more confident and they feel that the Niger forces have been very helpful in stabilizing the area and have been bringing peace and stability back in order to completely eradicate the Boko Haram threat,” said Rafini.

“Our very security depends on the security of our neighbors. It is Niger’s duty to contribute to this process…of establishing peace and security in the region,” he added.

Through its provisions toward improving agricultural and infrastructure sectors, the MCC compact will strengthen the strategy of countering violent extremism in Niger and bolster long-term regional security, according to Rafini.

“It’s important to mention the very tight link between security and poverty. A number of countries have taken arrangements to improve their economies and spur investment, which are necessary to instill greater hope in our younger generations because…remaining idle and unemployed makes these young people much more vulnerable to radicalism,” he said. “It is very important to focus on poverty and eliminate it.”

Niger has continually ranked on the low-end of the United Nations Human Development Index—a composite metric that ranks countries based on gross domestic product, life expectancy, and access to quality education.

Rafini hopes Niger will move in a positive and sustainable economic direction through the implementation of such investment compacts with organizations like the MCC.

“The ultimate objective is for no Nigerien to go hungry…We are moving toward eliminating poverty entirely. It is a difficult thing but we must provide measures to alleviate the population of this suffering. We are well on our way to success,” said Rafini.