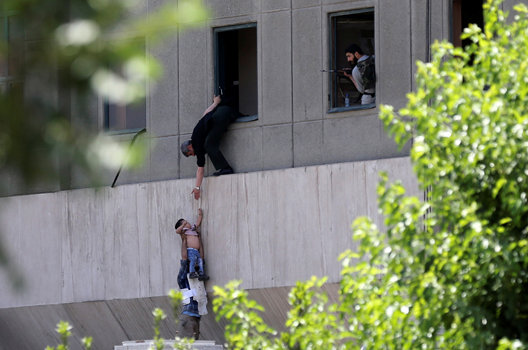 An official response to ISIS’ deadly twin attacks in Tehran on June 7, Iran’s medium-range missile strikes were a clear message not only to many in the region, but to Washington as well, that the Islamic Republic will not hesitate to respond decisively to forces hostile toward Iran.

Iran’s strikes against Islamic State of Iraq and al-Sham (ISIS) targets in Syria’s Deir ez-Zor governorate on June 18 marked the Islamic Republic’s first missile strikes in a foreign country since Tehran attacked the People’s Mujahedin of Iran (MEK), a militant political organization, in Diyala, Iraq, with ballistic missiles in 2001.

Though the Iranian missiles hit targets in Syria, Tehran was most intent on delivering a message to Saudi Arabia. Iran’s Islamic Revolutionary Guards Corps (IRGC) blamed Riyadh (and Washington, too) for the ISIS attacks in Iran’s capital. For years, Tehran has also accused Saudi Arabia of sponsoring terrorism in Iran’s peripheral provinces where Sunni-majority ethnic communities (Baloch, Kurdish, Arab, etc.) live, and where there has been a history of militancy against the Islamic Republic waged by groups with grievances stemming from marginalization in the country as well as some with separatist ambitions.

With Saudi and Iranian leaders having recently exchanged increasingly heated threats about direct military confrontation, Tehran’s launch of missiles at a foreign country marks yet another sign of escalation in the Saudi-Iranian geopolitical rivalry for dominance in the Middle East. Saudi King Salman’s decision to elevate his son Mohammad bin Salman (MBS) to crown prince, several days after Iran’s strikes on eastern Syria, can only further inflame bilateral tensions based on MBS’ anti-Iranian and increasingly sectarian foreign policy vision for the Middle East.

The timing of Iran’s response to the ISIS attacks was strategic. The ongoing punishment of Qatar by its Arab Gulf neighbors, which marks the Gulf Cooperation Council’s (GCC) gravest internal political dispute since its establishment in 1981, is enabling Iran to take advantage of fractures within the GCC to expose Saudi Arabia’s relative weakness in the region while making the Islamic Republic increasingly important to Doha.

Since US President Donald J. Trump took office and his administration put Tehran “on notice” for its regional conduct, Iran’s ongoing ballistic missile tests have become the basis of the arguments made by officials in Washington in favor of more sanctions against the country. Yet Tehran’s strikes against ISIS in Syria sent a message to the White House that Iran will reserve and exercise its right to fire missiles to defend itself against hostile forces.

As the GCC’s row becomes a major headache for the Trump administration with many vital US national interests at stake in the region, Tehran’s bold move came as the White House found itself in a weaker position to respond firmly with support from all of Washington’s Sunni Arab allies, despite all the symbolism behind the historic Arab Islamic American Summit in Riyadh in May. The confusing and contradictory messages coming from different voices in the Trump administration with regard to Saudi Arabia and its regional allies’ actions against Qatar raises more questions about US credibility and the administration’s competence.

The Syrian Arab Army (SAA) and allied forces’ meeting with Iraqi forces at the al-Waleed border crossing in June marked a watershed achievement for the Syrian and Iraqi militaries in their battle against ISIS. This meeting occurred the same day that two US Navy F/A-18E Super Hornets shot down a Syrian SU-22 fighter jet close to Tabqa, Syria (a US warplane’s first downing of a manned aircraft in eighteen years). With these developments, the geopolitical competition over eastern Syria is intensifying as ISIS loses control of territory and the brutal civil war enters a new phase.

Meanwhile, Russia and Iran are united in their quest to deny the US and its allies the ability to dominate eastern Syria, which is home to the country’s oil-producing region and a land corridor linking the Syrian and Iraqi capitals. Iran’s missile strikes in Syria, which flew over Iraqi airspace, were aimed at further enhancing the SAA’s position in eastern Syria and Baghdad’s forces in western Iraq, amid decisive battles for future control of territory that Damascus and Baghdad lost years ago.

Despite Trump’s anti-Iran rhetoric, his administration has yet to devise a comprehensive plan for dealing with Syrian President Bashar al-Assad and Tehran’s role in Syria. Where the Obama administration carefully avoided actions that risked deepening Washington’s involvement in Syria’s civil war and concentrated efforts to combat ISIS, over the past three months Trump has demonstrated his willingness to directly target the Syrian regime’s forces, in particular, the US missile strikes on a Syrian air base in April in response to a chemical weapons attack on Syrian citizens. However, such strikes do not represent a coherent strategy for dealing with Assad.

Ultimately, the latest developments in eastern Syria are pitting forces in the US-backed coalition against Iran and its allies’ forces fighting to consolidate Tehran’s corridor from the Iranian-Afghan border to Lebanon and Syria’s Mediterranean coasts. In light of Iran’s missile strikes against ISIS targets in Deir ez-Zor and the US downing of a Syrian air force jet, there is a growing risk of rising conflict between Washington and its allies on one side and Tehran, Moscow, and Damascus on the other.

Iran is determined to maintain its highly influential role in the conflict while maintaining Tehran’s core set of allies, friends, and proxies across the region in Bahrain, Lebanon, Iraq, Syria, and Yemen. That the Sunni Arab states and their Western allies are in a weak position to counter Iran’s recent missile strikes in eastern Syria will add to the perception that Tehran’s regional influence is rising at Riyadh’s expense. Indeed, at a time when Washington’s Sunni allies in the Middle East are divided over the Qatar crisis, Iran’s axis of forces in the region is, comparatively speaking, strongly united behind Tehran.

Giorgio Cafiero (@GiorgioCafiero) is the chief executive officer of Gulf State Analytics, a Washington, DC-based geopolitical risk consultancy. You can follow him on Twitter @GulfStateAnalyt.

Image: A boy was evacuated during an attack on the Iranian parliament in central Tehran on June 7. The Islamic State of Iraq and al-Sham (ISIS) took responsibility for the attack. Iran’s Revolutionary Guards accused Saudi Arabia of supporting the ISIS attackers. (Omid Vahabzadeh/TIMA via Reuters)