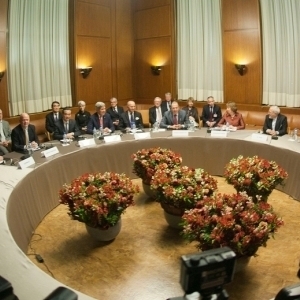 In the aftermath of the Geneva accords constraining Iran’s nuclear program, some critics of the deal have compared it to the 1994 Agreed Framework with North Korea that fell apart in 2002 and ended with the North building and testing nuclear weapons.

This criticism ignores major differences between Iran – a large, influential country that relies on exporting oil and pays at least some attention to popular sentiment – and North Korea – a small, hereditary totalitarian dictatorship kept afloat by neighboring China.

Under Bush “I never felt as though there was a coherent plan to solve the problem,” Charles “Jack” Pritchard, a former senior official dealing with North Korea in both the Clinton and Bush administrations, said in a recent interview.

Infighting between professional diplomats in the State Department and hawkish political appointees in the department, as well as in the vice president’s office, National Security Council (NSC) and Pentagon, complicated the US response to reports that North Korea was importing components for a uranium enrichment program – a potential second path to a bomb – while keeping a plutonium reactor mothballed under the terms of the Agreed Framework. When an inter-agency US delegation confronted the North Koreans with this information in October 2002 and the North Koreans admitted it, the Bush administration had not gamed how North Korea would react or what to do.

US diplomats wanted to keep negotiating, but among the hawks – many of whom had opposed the Agreed Framework before they came into office – “there was a desire to punish North Korea and publicize how bad it was and that it couldn’t be trusted,” Pritchard said.

The White House decided to stop supplying North Korea with heavy fuel oil – a significant carrot in the Agreed Framework – and refused North Korean overtures to continue to talk, arguing that to do so would “reward bad behavior.”  The Pyongyang government responded by throwing out international arms inspectors and quitting the nuclear Non-Proliferation Treaty. In 2006, months after the US blacklisted a Macau bank where North Korea had $24 million in deposits, North Korea staged the first of three nuclear tests, using plutonium reprocessed from its reactor at Yongbyon.

Bush administration officials such as Vice President Dick Cheney and Undersecretary of State and later UN Ambassador John Bolton argued that there was no option but to confront North Korea with evidence of its cheating. Both men and their supporters also doubted that North Korea could be trusted to keep any nonproliferation agreement. According to Washington Post reporter Glenn Kessler, Cheney in late 2003 is said to have told participants in a high-level White House meeting on North Korea that “We don’t negotiate with evil. We defeat it.” Bolton focused on creating a proliferation security initiative to interdict North Korean contraband and decried the Pyongyang regime for its infamous abuses of human rights – a view that Bush shared.

In the Bush administration, particularly its first term, “there was a lack of trust and collegiality” in the foreign policy apparatus, Pritchard said. Secretary of State Colin Powell’s opponents in the bureaucracy used backdoor channels to undermine him, reduce flexibility and leak negative information when multilateral negotiations finally took place.

In the Obama administration, in contrast, the NSC, State Department, Treasury Department and Pentagon, as well as the vice president’s office, appear to have worked harmoniously to produce the November 24 agreement with Iran. The Treasury Department has been particularly important as the agency responsible for implementing sanctions against Iran and crafting sanctions relief in return for a deal.

President Obama set the tone from the start, beginning his first term in office by reaching out to Iran – a step that helped unify the international community behind unprecedented sanctions when Iran backed out of a 2009 confidence-building deal. In the second term, says Trita Parsi, head of the National Iranian American Council and author of two books on Iran, “personnel changes in the last year have made the ideological cohesion in the administration even greater.” There have been no reports of dissension about Iran policy from the NSC, Pentagon or Treasury Department.

To the extent that the comparisons between the North Korea and Iran cases have merit, it mostly has to do with Congress. A Republican-led House of Representatives was repeatedly late in appropriating money in the mid-late 1990s to pay for the fuel oil shipments to North Korea. The US and its partners also lagged in constructing two light-water nuclear reactors that were supposed to replace the more proliferation-prone facility at Yongbyon. “The implementation was messed up,” said Joel Wit, a former US official dealing with North Korea.

Congress could now try to blow up the Geneva agreement with Iran by imposing new sanctions, which would violate the accords. The Obama administration is trying to convince Congress to hold off on any new sanctions, at least until the interim agreement runs its course in six months.

It remains unclear whether the Iran deal will have any impact on North Korea, which seems to have become even more unpredictable since the death two years ago of leader Kim Jong-il and the succession of his son, Kim Jong-un. Kim’s uncle, Jang Song-thaek, the apparent power behind the throne, has reportedly just been deposed. “Now I don’t know who’s running the show,” Pritchard said.

Pritchard complained that the Obama administration has put North Korea on the back burner, perhaps because “the toothpaste is out of the tube” and North Korea already has nuclear weapons. Plus China is there to prevent the North Koreans from going too far “across the line,” he said.

Still, a nuclear deal that sticks with Iran might give even the North Koreans reason to recalculate. As Joe Cirincione, president of the Plowshares Fund, has noted: “Iran and North Korea are the last ripples of the nuclear wave that began with Hiroshima.”

If Iran can be persuaded not to build nuclear weapons and North Korea to give them up, there are no other countries likely to take their place in the nuclear wannabe line anytime soon.