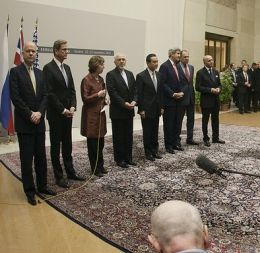 Iran agreed to curb its nuclear program on Sunday in exchange for initial sanctions relief. Sounds like good news to many, who say the detente between Tehran and the West could help avoid war in the Middle East. But of course nothing is that easy, and already Israel has called the step a “historic mistake.” Which is it? And what’s going to happen next?
To find out,  GlobalPost turned to its senior foreign affairs columnist Nicholas Burns, as part of a regular feature called “Three Questions with Ambassador Burns.”

Is the Geneva deal good for the US or a strategic mistake?
On balance, this deal is smart, sensible and the right step to take by the Obama administration.

It will give us the time and flexibility to negotiate the much more difficult and complex final agreement to dismantle much of Iran’s nuclear program.

Here are its strengths. For the very first time, Iran’s nuclear enrichment program will be reversed in significant ways. Without this agreement, there would be no barriers to a continued acceleration of Tehran’s dangerous nuclear effort. The overall deal is thus a clear gain for the US and Europe as well as Israel and the Arab world.

The specific concessions to which Iran agreed will make it very difficult for it to get closer to a nuclear capability, much less a weapon during the upcoming talks. Secretary of State John Kerry’s list of Iranian compromises in his early morning Geneva press conference was impressive.

Iran will convert its entire stockpile of 20 percent enriched uranium (200 kilograms) to make it unusable for a nuclear weapon. It will also suspend all enrichment activities above a low level, not manufacture new enrichment facilities or centrifuges at existing facilities and not fuel or commission the Arak Heavy Water Reactor. Most importantly, Iran will now be subjected to daily inspections of its nuclear facilities by the International Atomic Energy Agency (IAEA).

These are significant compromises by Iran and not superficial as some critics have incorrectly alleged. In fact, the Iranian concessions are much stronger and more intrusive that many of the deal’s supporters and critics alike had anticipated.

The totality of Iran’s assurances mean that the US, the EU, Russia and China can now negotiate the final agreement with Iran over the next few months without having to worry that Iran will race ahead toward a nuclear weapon behind their back. This was a crucial condition for the next round of talks. In fact, it would have been dangerous to negotiate without having first rolled back and frozen in these areas Iran’s nuclear program. The Geneva deal does that.

What about criticism that the Geneva deal is too lenient and reduces pressure on Iran, especially through its limited sanctions relief?
In international politics, you always have to weigh a prospective deal against the alternatives. In this case, the alternative was to continue with full sanctions and not commit to negotiations and this interim agreement. Some Israeli, Saudi and American critics of the deal say we would have been better off with no deal and by keeping maximum sanctions pressure on the Iranian regime.

But, that criticism misses a key point. It would have been reckless to negotiate while Iran had no limitations on its current, well-financed and increasingly powerful program. By stopping it in place, it gives the US and others the time to negotiate in a much stronger position.

Here is the other problem with the critics — they assume the sanctions regime could be implemented at full force for months or years to come. But, as Kerry pointed out in his press conference, a refusal of the US to negotiate and to provide limited sanctions relief might have led over time to a weakening of consensus among the Perm Five Powers about keeping Iran’s feet to the fire for too much longer. With the election of Rouhani and the new Iranian interest in a diplomatic solution, the US would have lost international credibility — and support for the sanctions — if it had not agreed to these first real talks between Teheran and Washington in over three decades.

Critics say the sanctions have been weakened forever now and it lets Iran off the hook. But, the great majority of the really tough sanctions will remain in place including the US and EU financial and oil and gas sanctions. We’ll still have very strong and convincing economic leverage over Iran in the upcoming talks.

Israeli government critics also alleged today that the Geneva deal is too lenient and will fall apart, comparing it to the flawed US nuclear agreements with North Korea in the Bush and Clinton administrations. But, that is mixing apples and oranges. North Korea is a reclusive state with a bizarre leadership willing to isolate its people and economy almost completely from the outside world.

Iran is a completely different country — much more open and transparent, more dependent on commerce with other countries and with a population linked by education, work and inclination to the rest of the Middle East and Europe. In other words, Iran is susceptible to the continued pressure from the draconian sanctions that remain in place. That was never really true of the North Koreans.

The real problem with Israeli and Saudi opposition to the Geneva deal is this — they seem not to favor any negotiations with Iran. Why else would they reject so openly the US commitment to talk to Iran and seek a negotiated way out of this serious danger? It may not be in their interest to negotiate. But, it is clearly in the interest of the United States government and the American people. We will be much better off with a negotiated deal that leaves Iran short of a nuclear weapon if we can get that.

And, as long as the US is involved in negotiations with Iran, it would be untenable for Israel or any other country in the region to use force against Iran.

I think the very public and aggressive Israeli and Saudi criticism of the Obama administration is unwarranted and unwise. The US has been a good and loyal friend to both countries. We deserve better. Both countries are free to disagree, of course, but that is always more effective behind the scenes and in a tone of mutual respect.

There is a certain wisdom in how Obama and Kerry are preceding. After 34 years of separation and divorce from Iran, they are wisely taking the time for diplomacy and to commit to a negotiating process that may or may not succeed in blocking Iran from becoming a nuclear weapons power.

But, this diplomatic path has earned the US much greater credibility with the rest of the world. As we commit to serious negotiations, other countries are much more willing to support our strategy as well as the sanctions track. This may be an important factor if the negotiations fail altogether. Obama would then have the credibility and support (among some states) internationally if the US has to consider the use of force.

So, Obama is right to negotiate with Iran. It is the only real and smart alternative for us now.

He is also fortunate to have a top flight negotiating team at the State Department on Iran. Secretary John Kerry, Deputy Secretary Bill Burns and Under Secretary of State Wendy Sherman all deserve great credit for their determined and expert performance at center stage in this drama.

Some say the Geneva deal will now lead to a normalization of America’s relationship with Iran?
It is far too early to know if Geneva will permit the US and Iran to repair the damage of their bitter and acrimonious relationship of the past three decades.

The Geneva deal is an interim, limited agreement designed to give breathing space for the much more difficult negotiations to come.

But it does not resolve the major issue — we still need to stop Iran well short of a nuclear weapon. That will require a much more intrusive final agreement. And Geneva does not also stop Iran’s cynical and objectionable support for the murderous Assad regime in Syria and its support for Hezbollah, Hamas and other terrorist groups.

The negotiations have also not changed the Iranian government’s unacceptable rhetorical attacks against Israel, including outrageous remarks by the Supreme Leader last week.

We are a long way from normalizing our ties with Iran.

The next round of talks over the next few months will be much more difficult, demanding and important. The US and other perm five countries will attempt to convince Iran not just to freeze its nuclear efforts but to dismantle much of its extensive and highly developed nuclear complexes. The Iranian government may very well be much less united in agreeing to such a severe dismemberment of its nuclear program. The US and others will also demand much more widespread inspections of Iran’s far-flung nuclear empire.

In other words, there is a long way to go before the US should even think of normalizing relations with a regime that is a nuclear pariah, funder of terrorism and opponent of the major aims of American strategy in the Middle East.

That is why the US must keep the major sanctions in place, leave the threat of force clearly visible on the negotiating table and pursue a tough policy of continued pressure against the Iranian authorities while we negotiate.

That is very likely the only reason why Iran will elect to continue these very promising but preliminary and incomplete negotiations.

Nicholas Burns is a professor of the practice of diplomacy and international politics at Harvard’s Kennedy School of Government and a board director of the Atlantic Council.