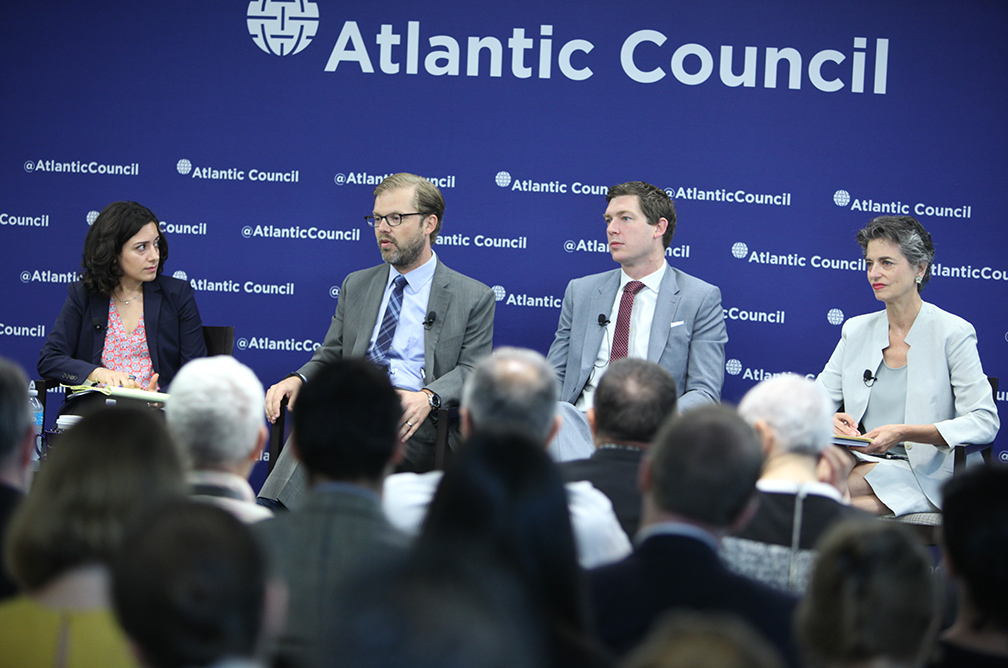 Iran is living up to the commitments it made as part of a nuclear agreement reached with six world powers in 2015, a senior State Department official said on September 9.

“On the nuclear side, so far, Iran has lived up to its commitments, and that’s a good thing,” said Chris Backemeyer, deputy assistant secretary of state for Iran.

“On our side, the US has lived up to its commitments as well. We have lifted all the sanctions that we said we would,” he added. “The [nuclear deal with Iran] is working as we intended it to.”

Backemeyer participated in a panel discussion at the Atlantic Council. He was joined on the panel by David Mortlock, a nonresident senior fellow in the Council’s Global Energy Center, and Barbara Slavin, acting director of the Council’s Future of Iran Initiative. Yeganeh Torbati, a reporter with Reuters, moderated the discussion.

Backemeyer’s comments are in sync with recent findings by the United Nations’ nuclear watchdog, the International Atomic Energy Agency (IAEA). The IAEA’s confidential report, which was reported by Reuters, found: “Throughout the reporting period, Iran had no more than 130 metric tons of heavy water…Iran’s total enriched uranium (up to 3.67 percent purity) stockpile did not exceed 300 kg,” citing the nuclear deal’s limits on heavy water and enriched uranium.

The so-called Joint Comprehensive Plan of Action (JCPOA)—the nuclear deal struck between Iran and the P5+1 (the United States, the United Kingdom, France, Russia, China, and Germany)—came into effect in October of 2015. Since then, Iran’s exports of crude oil have risen to near pre-sanctions levels and European companies have taken tentative steps toward resuming business with the Islamic Republic. British Airways and KLM have announced that they will restart flights to Iran. Air France resumed flights in April.

“We spent a great deal of time trying to make sure that both the Iranians and our European partners, and those who aren’t part of the P5+1 but are on the global stage, know that the United States is not standing in the way of business opportunities,” said Backemeyer.

On a trip to London in May, US Secretary of State John Kerry sought to reassure European banks that they can do business in Iran as long as they adequately screen partners and do “legitimate business.”

“We want to make it clear that legitimate business, which is clear under the definition of the agreement, is available to banks,” Kerry said.

The nuclear deal has opened new business opportunities in Iran, said Mortlock, as is evident from the uptick in activity in the energy sector and discussions on allowing foreign direct investment in Iran.

“Nonetheless, there are obviously still significant challenges” related to remaining Western sanctions on Iran, said Mortlock. But, he contended, these challenges are “manageable” and companies—US and non-US—are taking steps to ensure that they are in compliance with US sanctions as they think about entering the Iranian market.

A key challenge these companies face is ensuring that they are not doing business with individuals or entities on the US Treasury Department’s Specially Designated Nationals (SDN) list. The Islamic Revolutionary Guards Corps (IRGC), one such SDN, has deep business interests in Iran.

Mortlock cited two other challenges faced by companies looking to do business in Iran: a “reputational risk” because some members of the US Congress remain opposed to the nuclear deal and the lack of transparency in Iran. If Iran were to improve transparency it would “give a lot of comfort to companies,” he added.

Slavin said the Iranian government knows what it has to do to “wall off” the IRGC in order to secure foreign business interest. Iranian President Hassan Rouhani has taken some positive steps on this front, she said.

“The question is: can Iran actually now diminish the role of the IRGC in its economy?” said Slavin. “Now the IRGC is fighting to keep its share of the pie, especially as that pie appears to be growing now with the relief of the sanctions.”

The IRGC’s role in the Iranian economy expanded during the years when the country was under Western sanctions imposed in response to the Islamic Republic’s nuclear program.

Mortlock, noting complaints from the private sector that it is too hard to do business in Iran, said that “if they scratch the surface, I think they would realize there is a lot more that can be done.”

“If you simply put the right policies and procedures in place you can operate in Iran, you can export to Iran. You just need to ask those questions of what can be done rather than look at the surface,” he added.

Iran recently announced multi-billion dollar deals to purchase or lease around 200 planes from Boeing and Airbus. The US House of Representatives in July approved legislation to block the sale and in a letter to Boeing, two Republican lawmakers listed accusations that the IRGC uses commercial airlines to transport weapons and troops to Hezbollah, Hamas, Houthi rebels, and Syrian President Bashar al-Assad’s regime.

Boeing has said the deal will be contingent upon US government approval. Here the United States can do more to improve the relationship with Iran by approving the airplane deal, said Slavin. “If these planes go through, Iranians will be able to fly without having to worry that the plane is going to fall out of the sky,” she added.

Backemeyer said there are limits to what the US government can do. On the airplane deal, for example, he cited US concerns about dual-use technology that is used in commercial airliners.

Presidential elections in the United States have added another layer of uncertainty to the US-Iran relationship.

“Uncertainty makes private companies wary of embarking on any new opportunity that requires effort and cost and time up front,” said Mortlock. “Certainly there are a lot of companies in the private sector that are taking a wait-and-see approach.”

Democratic presidential nominee Hillary Rodham Clinton has said she supports the deal. Mortlock said that if Clinton is elected president she will need to invest as much as the Obama administration has done to ensure the success of the deal. “Wanting to support the deal is one thing, showing the same level of commitment that this administration has to make it work is another,” he said. “Even with a Clinton administration there is a question mark whether that is going to be the case.”

“If Clinton wins in November, I think we will see a surge of comfort,” said Mortlock. “If Trump wins, there will be a long period of holding our breath.”

Image: From left: Yeganeh Torbati, a reporter with Reuters, moderated the discussion on Iran with Chris Backemeyer, deputy assistant secretary of state for Iran; David Mortlock, a nonresident senior fellow in the Atlantic Council’s Global Energy Center; and Barbara Slavin, acting director of the Council’s Future of Iran Initiative, at the Atlantic Council in Washington on September 9. (Atlantic Council / Victoria Langton)