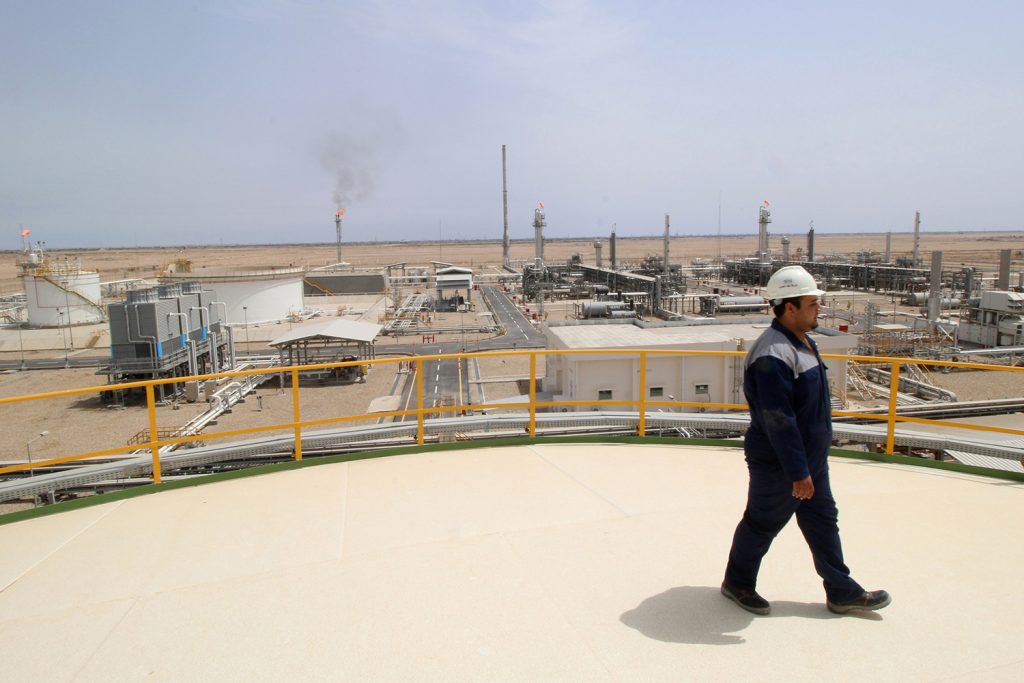 Until suitable alternatives materialize, Iran will continue to be a crucial supplier of energy to rapidly growing Iraq for years to come, insists Luay Al-Khatteeb, the former Iraqi minister of electricity.

Al-Khatteeb spoke May 14 with Abbas Kadhim, director of the Atlantic Council’s Iraq Initiative—barely a week after leaving the government post he had led since October 2018.

Despite having spent only one year on the job, Al-Khatteeb said he’s proud of his ministry’s achievements under very difficult conditions.

“When we were sworn in by parliament, it was on the basis of a four-year program, and the major work was to materialize in year two, three, and four as opposed to year one. Having said that, although our tenure was cut short, we succeeded in delivering 25 percent extra in power generation compared to 2018 levels—the equivalent of 3,500 megawatts,” Al-Khatteeb said during the interview, which was co-hosted by the Atlantic Council’s Global Energy Center.

“To put this in context, when Iraq witnessed regime change back in 2003, power generation hardly exceeded 3,000 megawatts, so to add 3,500 in one year is quite a milestone.”

More importantly, he said, “we added significant capacity to the transmission and distribution systems of liberated provinces that hadn’t had electricity since the occupation of ISIS back in 2014. Mosul, Anbar, and other provinces started to receive power—not the maximum level we aspired to, but acceptable when judging the limitations of time and resources.”

Al-Khatteeb is considered a top regional energy expert. Before his stint as minister of electricity, he was founding director of the London-based Iraq Energy Institute (IEI); he’s also a foreign policy fellow at the Brookings Institution, and his articles have appeared in the New York Times and Foreign Affairs.

Kadhim asked Al-Khatteeb why Iraq is flaring so much of its natural gas. According to the IEI itself, more than half of the country’s raw gas production of 2,875 million standard cubic feet per day (scf/d) is being torched, representing a potential loss of $3.5 billion annually.

“It makes no sense for observers like [me] to see a country that burns billions of dollars over the years, then buys gas from elsewhere,” said Kadhim, who is also a resident senior fellow for Middle East programs at the Atlantic Council. “The Washington, D.C. rumor mill has it that Iraq is purchasing gas from Iran at many times the market rate. Is that true?”

Al-Khatteeb replied that his country’s capabilities at the moment are severely limited.

“We are not 100 percent flaring everything, but yes, there is a lot of flaring,” he conceded. “The only available option we have at the moment right now is Iran—and let’s be frank. I couldn’t care less as a client from the receiving end about whether this molecule of gas comes from Iran or Saudi Arabia. What really matters to me is that this gas is competitive pricewise, can be delivered as soon as possible, and meets my volume demands.”

The only other alternative is liquefied natural gas (LNG), but it is far more expensive than gas piped into Iraq—which in any case would need to develop its LNG facilities, a process that could take years.

In September 2019, Iraq signed an agreement with the six-nation Gulf Cooperation Council Interconnection Authority (GCCIA) to receive 1,000 megawatts via a transmission line from Kuwait to Basra.

“But this project needs to be implemented by the GCCIA itself. We’ve done our part in signing the deal,” he said. “We need that supply now. We have a huge deficit, and when it comes to peak demand under boiling temperatures, we cannot afford to wait four years.”

In fact, the IEI estimates that Iraq needs $18 billion worth of infrastructure by 2025 in order to keep up with a rapidly growing population and reach domestic gas production capacity of 3,200 million scf/d. Demand is projected to reach 37,000 megawatts by then.

“We’ve made it clear to the US that we need three or four years to achieve self-sufficiency in gas; this includes field development, pipelines, processing facilities, compressors, and other infrastructure,” he said, insisting that Iraq must “have a full executive government with zero interference [from] politicians trying to hinder the process of moving forward.”

Despite its ongoing sanctions against Tehran, the US government has repeatedly granted waivers allowing Iraq to continue importing Iranian gas and electricity. Yet previous 120-day waivers have been shortened, with the most recent thirty-day exemption—issued in late April—widely seen in Iraq as a concerted effort by Washington to turn up economic pressure on Iran.

Al-Khatteeb deflected a viewer’s question about whether the shortened waivers issued by the White House have helped or hurt Iraq’s relations with the United States.

“The US wanted to test our capabilities, and we did well,” he said without elaborating. “Every time the waiver is about to expire, it’s like a checklist, a procedure. They keep asking the same question, and we keep repeating the same answer.”

The long-term answer, Al-Khatteeb suggested, is for Iraq to develop energy self-sufficiency and security as quickly as possible.

He also expressed disappointment with the stalled Ratawi gas hub due to disagreements between Bechtel and Honeywell, the two US companies whose joint consortium had been awarded a contract to build the megaproject. In its initial stage, Ratawi was to process up to 300 million scf/d of associated gas generated as a byproduct of crude oil production. That would have cut Iraq’s current level of gas flaring by nearly 20 percent.

“I don’t want to assign blame, but so many factors play into materializing projects on the ground,” he said. “One cannot hold a whole government accountable for every single delay.”

As for implementation of a nationwide tariff system on electricity, Al-Khatteeb said tariffs are generally implemented gradually as subsidies are phased out. But in Iraq’s case, the introduction of tariffs is an urgent matter.

“Unfortunately, for many years, high oil prices created an unrealistic sense of security for the government to continue paying these subsidies, which cost the state around $12 billion a year,” he said, pointing out that the average US consumer pays 11 cents per kilowatt-hour—while the average Iraqi pays less than a cent.

“Whether we like it or not, we have to act fast and smart right now to phase out subsidies,” he warned. “Put simply, if these subsidies are not dealt with as soon as possible, the whole national grid will be compromised.”

The effect of US sanctions on the Iran-Iraq alliance

The potential sanctions against Iraq under consideration now could damage the United States’ goals in that country and would only embolden Iran’s position—the exact scenario that US policy has tried to avoid. Economic countermeasures, such as restrictions to Iraq’s Federal Reserve accounts—could not only cede economic clout within Iraq to Tehran but could also have significant impact on the US dollar’s global position.

Image: A worker walks at the gas field of Siba in Basra , Iraq April 25, 2018. REUTERS/Essam Al-Sudani