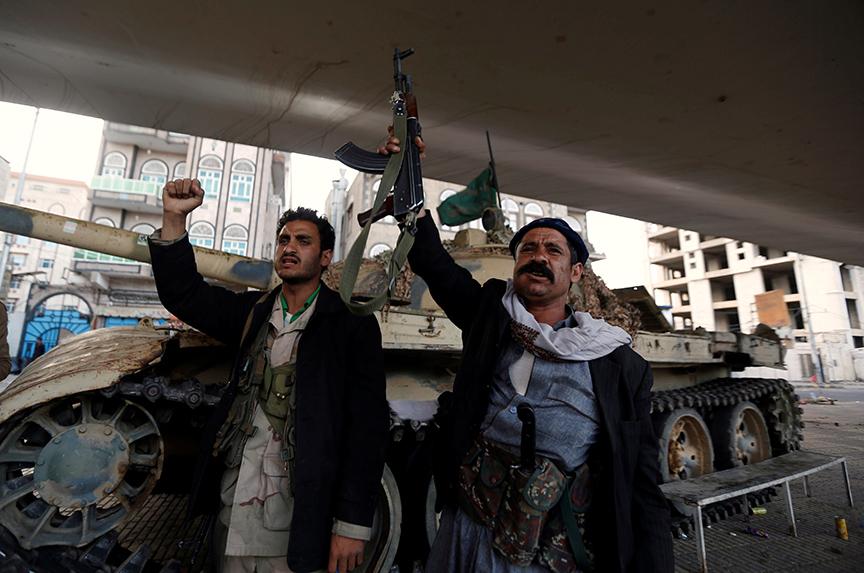 The death of Yemen’s former president, Ali Abdullah Saleh, at the hands of his former Houthi allies will weaken the Iranian-backed rebels, according to Nabeel Khoury, a nonresident senior fellow in the Atlantic Council’s Rafik Hariri Center for the Middle East.

“The demise of Saleh now actually weakens the Houthis’ military and makes them less acceptable politically inside Yemen,” said Khoury, adding, “it was not a very wise move on [the Houthis’] part.” Khoury served as deputy chief of mission at the US Embassy in Yemen from 2004 to 2007.

Saleh served as Yemen’s president for more than three decades until his ouster in an Arab Spring uprising in 2011. He was killed on December 4 by Houthi rebels who accused the ex-president of staging a “coup” against “an alliance he never believed in.”

These accusations underscored the rift that emerged between Saleh and the Houthis and led the ex-president to reach out to Saudi Arabia, which has been conducting airstrikes against the Houthis in Yemen since 2015.

Saleh’s supporters had, until last month, been fighting alongside the Houthis against Yemen’s current president, Abdrabbuh Mansour Hadi, who is backed by Saudi Arabia.

On December 2, Saleh said he was ready to turn a “new page” with a Saudi-led coalition if it stopped attacking Yemen and ended its crippling blockade that has pushed the country into a humanitarian crisis.

Saleh’s overture to Saudi Arabia two years ago had been rebuffed by Riyadh. “What was different about [his latest overture] was that this time it wasn’t just a peace offer, but was coupled with a military move against the Houthis,” said Khoury. “So, the Saudis and Emiratis were more willing to take him at his word this time.”

Nevertheless, Khoury said the prospects of a favorable outcome were not good “partly because the Saudis and Emiratis were not willing to stop the war and encourage full reconciliation.”

“They merely wanted to use Saleh and the forces under his control to weaken the Houthis,” he added.

While an alignment of Saleh’s forces with the Saudis would be a significant development in the war and could in principle hasten an end to the conflict, Khoury said the prospects for such a development have now dimmed.

With Saleh’s death, his General People’s Congress [GPC] is weakened and lacks strong leadership. Khoury predicted Saleh loyalists will be bent on avenging the death of their late leader. “In terms of peace overtures, the Saudis will probably not put much faith in the remaining leaders of the GPC,” he added.

The Saudi-led coalition stepped into the conflict in Yemen in 2015 with the goal of reinstating Hadi. It has since become mired in the war that has, according to the United Nations, claimed close to 10,000 lives, injured 50,000 others and made more than half the population food insecure.

Besides the war, the Saudi-led blockade of Yemen has created a crisis that has left more than twenty million people in need of humanitarian aid and sparked a cholera outbreak that has killed more than 2,000 people since April.

Khoury described the Saleh-Houthi partnership as an alliance of convenience. While a rupture was inevitable, the timing was unexpected, he said.

The Houthis led a series of rebellions against Saleh between 2004 and 2010; the rebels also backed an uprising that led to Saleh’s ouster in the Arab Spring in 2011. Three years later, in 2014, the two former foes formed a surprise alliance and seized the Yemeni capital, Sana‘a, forcing Hadi to flee first to Aden and then to Saudi Arabia.

Over the past week, the Houthis have clashed with Saleh’s supporters. The fighting has left more than 100 people dead. The rebels even bombed Saleh’s home in Sana‘a.

Meanwhile, the Houthi rebels claimed on December 3 to have fired a cruise missile at a nuclear facility that is under construction in Abu Dhabi, the United Arab Emirates (UAE), which is part of the Saudi-led coalition. A state-run news agency in the UAE denied the claim.

While the Houthis did fire a ballistic missile at Riyadh in November, Khoury said the rebels lack the military capacity to expand the war beyond Yemen’s borders. “Widening the war is not really in their interests,” he said.

As for the war raging in Yemen, Khoury said: “I am afraid the prospects for ending the war are not very good at the moment.”

Nabeel Khoury spoke in a phone interview with the New Atlanticist’s Ashish Kumar Sen. Here are excerpts from our interview.

Q: Before his death, ex-President Ali Abdullah Saleh had said he was ready to turn “a new page” in his relationship with the Saudi forces. What does his death mean for the prospects of ending the war in Yemen?

Khoury: President Saleh was always ready to reconcile with the Saudis. In fact, early on in the war in 2015 he sent emissaries to Riyadh, but he was turned down. His recent call for reconciliation was not in itself new.

What was different about it was that this time it wasn’t just a peace offer, but was coupled with a military move against the Houthis. So, the Saudis and Emiratis were more willing to take him at his word this time.

I don’t think the prospects for that working out were very good, partly because the Saudis and Emiratis were not willing to stop the war and encourage full reconciliation. They merely wanted to use Saleh and the forces under his control to weaken the Houthis.

The demise of Saleh now actually weakens the Houthis’ military and makes them less acceptable politically inside Yemen. It was not a very wise move on [the Houthis’] part.

Q: What was the reason for the split between Saleh and the Houthis?

Khoury: The relationship from 2014 on was more a marriage of convenience than a real secure alliance. Both sides saw a common interest in working together, but there was always going to be a split initiated either by Saleh or the Houthis whenever the opportunity arose. It wasn’t totally unexpected.

The timing, however, was unexpected to some extent. The Houthis had noticed that Saleh was beginning to take an independent line from them more and more. His speeches were not totally in line with their thinking. They actually made a move against him before he moved against them. They raided the Saleh mosque in Sana‘a and took weapons from its basement, and they also surrounded Saleh’s house and the houses of his nephews.

Saleh felt that the Houthis were probably going to move against him, so he moved against them in a bigger way first.

Q: What does Saleh’s death mean for the potential alignment between his movement and the Saudi-led coalition?

Khoury: The GPC [General People’s Congress] party, which Saleh headed, is now unfortunately much weaker with his demise. There isn’t any strong leadership. We are still not certain about the fate of Saleh’s top aide, Yasser al-Awadi, who managed the GPC.

At any rate, the party is weaker for it. I am afraid there is not a strong direction for it other than the immediate one which is trying to avenge the death of Saleh and fighting the Houthis who are almost back in complete control in Sana‘a and will surely go after Saleh’s family. In the immediate sense, there will be more infighting in and around Sana‘a.

In terms of peace overtures, the Saudis will probably not put much faith in the remaining leaders of the GPC. It would be up to President Hadi to take a serious peace initiative, but he is a weak leader as well. I am afraid the prospects for ending the war are not very good at the moment.

Q: What does the split in Saleh and Houthi alliance mean for the Saudis?

Khoury: This rupture does weaken the Houthis to some extent, but strategically it doesn’t change too much on the ground. The fact that Saleh was not aided in any way by the Arab coalition tells you where the strategic weakness lies. If they encouraged him to rebel against the Houthis they did not have the means on the ground to assist him. Assisting with aerial action does not change anything on the ground.

The forces that more or less are loyal to the Saudis, Emiratis, and Hadi are south of Sana‘a. They are not in any shape to assault the capital. In terms of holding on to Sana‘a, the Houthis still have the upper hand and I still don’t put much faith in a military conclusion to this war.

Q: What are the Houthis objectives?

Q: The Houthis claimed to have fired a missile at a nuclear facility under construction in the United Arab Emirates. Are the Houthis expanding the war beyond Yemen?

Khoury: I don’t think those reports were credible. The Houthis do not have rocketry in enough numbers to make a strategic difference. Widening the war is not really in their interests. The rocket that they fired at Riyadh, a single rocket, was a message to the Saudis that if they continue bombing Sana‘a, Riyadh will be bombed. But they simply don’t have that kind of capacity.