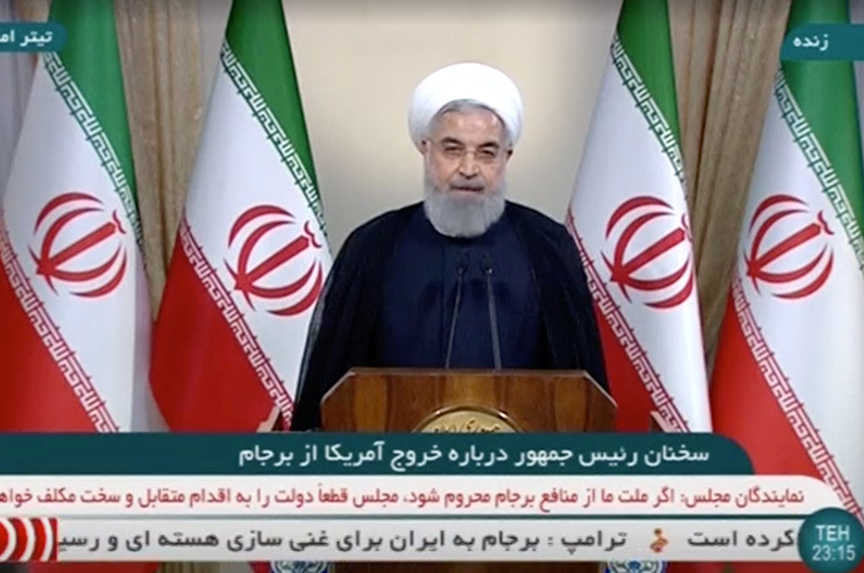 Three years ago, Iranians celebrated in the streets of Tehran after a deal was struck between their government and the P5+1 countries to curb Iran’s nuclear program in exchange for lifting sanctions on the Islamic Republic.

Three years later, there were once again celebrations in Iran after US President Donald J. Trump announced that the United States was withdrawing from the nuclear deal—formally known as the Joint Comprehensive Plan of Action (JCPOA). This time hardliners in parliament set fire to a photo of an American flag and chanted, “We burned America! We burned the JCPOA!”

Hardline newspaper Kayhan echoed similar sentiments on Trump’s May 8 decision to ditch the deal that was brokered by the P5+1 countries—the United States, the United Kingdom, France, Russia, China, and Germany—with Iran. “Trump tears apart the nuclear deal; It is time to set it afire!” was the headline in Kayhan. The state-run Islamic Republic News Agency (IRNA) referred to Trump as “the troublemaker.”

Saeed Jalili, a former nuclear negotiator and national security adviser to the Supreme Leader Ali Khamenei, tweeted a photo of himself holding Trump’s book Crippled America and wrote in English, “Trump, who had described America as crippled, must be aware that he can do nothing to Iran with a crippled body.”

Iran’s army chief, Maj. Gen. Abdolrahim Mousavi, said, “Thank God that America left the JCPOA. From the beginning I believed the biggest damage of the JCPOA was legitimizing and sitting at the negotiating table with America.”

Khamenei had the last word. He called Trump’s speech “silly and superficial” and full of “maybe more than ten lies.”

From the moment pragmatist Iranian President Hassan Rouhani spoke to his US counterpart Barack Obama in a historic phone call less than two months after taking office in 2013, hardliners in Iran pushed back. They insisted that Iran should never trust the United States. These same hardliners are now claiming vindication as a result of Trump’s withdrawal from the JCPOA.

Trump’s decision has not only emboldened hardliners in Iran, it has also hurt Rouhani’s standing. The Iranian president may now have to take a backseat in Iranian politics essentially becoming a lame-duck leader like the reformist former president, Mohammad Khatami.

Rouhani responded to Trump’s announcement by declaring that Iran would continue to abide by the terms of the JCPOA and that Foreign Minister Mohammad Javad Zarif would lead discussions with the other partners in the deal in the coming weeks.

But Rouhani also said Tehran would begin enriching uranium beyond the levels allowed if it became clear to the Iranian government that the JCPOA was not in its “national interests.”

Ali Larijani, speaker of Iran’s parliament, echoed Rouhani when he put the onus on the European partners in the deal to prove that they have “enough weight for settling down international issues or not.”

Rouhani might be perceived as the biggest loser in this zero-sum game, but Trump’s decision hurt the Iranian people the most. While Trump did claim that his action was motivated in part to benefit “Iran and the Iranian people,” most Iranians think that he is disingenuous. Their low opinion of the US president is fueled by his administration’s “Muslim ban,” his comments likening Iranians to terrorists, his references to the Persian Gulf as “Arabian,” and the economic difficulties that are sure to follow once US sanctions are slapped back on Iran.

On social media, Iranians expressed anger toward Trump using the English hashtag #NeverTrustUSA. The hashtag was popularized at the time the US president delivered his Iran strategy speech in October 2017. Another popular hashtag is #Untr_US_table.

However, Trump’s criticism of the JCPOA is not new. As a candidate, he vowed to tear up what he described as a “terrible” deal. Iranians had mentally prepared themselves for the eventuality of Trump’s withdrawal. As a result, the average Iranian is concerned about the state of Iran’s economy. Iranians worry about inflation and the devaluation of their currency. In recent weeks, the Iranian rial dropped in value in anticipation of Trump’s decision, forcing the Rouhani administration to step in and impose a fixed rate of 42,000 rials. On the black market, the rial was reported to be as high as 75,000 the day after Trump’s announcement.

Some Iranians, like their government, believe that it all comes down to how Europe plans to address Trump’s unraveling of twelve years of diplomacy. Regardless of the outcome, Trump’s action will push Tehran further into the arms of China and Russia. Unlike in the past, when Iran faced a united international community over its nuclear ambitions, it now faces one that is heavily fractured.

Under the Obama administration, Iran was hit with the worst sanctions the country had ever faced. It managed to stay afloat due to its strong black market and trade with countries that are not in reach of the US Treasury Department’s Office of Foreign Assets Control (OFAC).

Trump’s attempts to drive a wedge between the Iranian people and their government has only rallied them together. After experiencing a bloody revolution, an eight-year war with Iraq, international isolation, and sanctions, the Iranian people remain strong and resilient in the face of an unknown economic future.

Holly Dagres is an Iranian-American analyst on Middle East affairs. She specializes on Iran. She is also the curator of the weekly newsletter, The Iranist. Follow her on Twitter @hdagres.

Image: After US President Donald J. Trump announced his decision to withdraw the United States from the Joint Comprehensive Plan of Action (JCPOA), Iranian President Hassan Rouhani said in televised remarks on May 8 that Iran would remain in the nuclear deal. (IRINN/Reuters TV via Reuters)