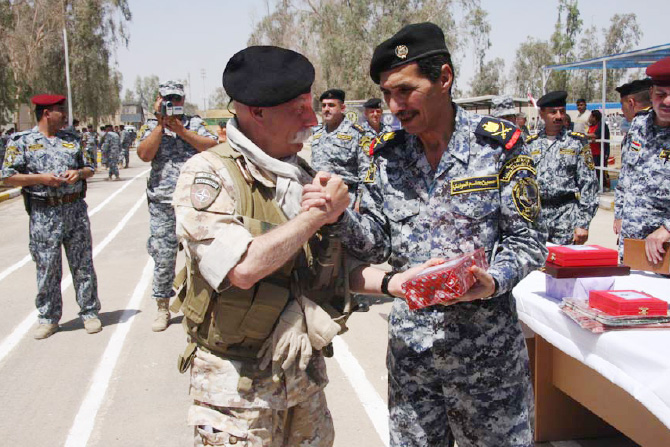 At the request of the provisional Iraqi government in 2004, NATO began providing training, assistance, and equipment to the Iraqi Security Forces to assist with the creation of a democratically led and enduring security sector.  This mission has grown from planning and training security forces to include advising and mentoring of security forces, both in and out of Iraq.  Today all twenty-six NATO members provide funding for NATO Training Mission-Iraq (NTM-I) and sixteen countries are providing staffing for the mission.

Since its inception, this out-of-area mission has challenged the conventional wisdom about the future purpose of NATO, demonstrating that the alliance can remain a relevant actor in the European and international security environments.  NATO Training Mission-Iraq (NTM-I) represents a model for how NATO can help perform successful European Security and Defense Policy missions; modernize member state forces and work interoperably; support the United States; engage with the Russian Federation; and work in the absence of member-state consensus.

The leadership training that NTM-I is providing is sustainable, with the purpose of shifting responsibility to Iraqi control.  The mission in Iraq also provides NATO with a framework for future missions.  First, though the U.S.-led coalition in Iraq did not initially have the support of all alliance members, NTM-I provided organization with a structure that could allow for members to provide support the coalition’s efforts in various ways.  As Lt. General Dubik stated in a June 2008 interview, “I found that every nation could give a good contribution to the Mission.  The challenges…are to make sure that each nation contributes consistently with the Iraqi national interests.  And that’s always possible…every nation in NATO could give a good contribution.”  NATO’s training academies, non-commissioned officer (NCO) leadership training, and training of Iraqi National Police have contributed to and supported the great efforts of establishing a democratically-led and experienced ISF.

International involvement for a military mission is critical, as it provides a source of legitimacy, both diplomatically and militarily.  The presence of the international community provides a venue for the international community to remain involved and interested.  Support need not be provided solely in the form of troop contributions.  Support can be monetary, training, or any other form of assistance.  NTM-I provides all of these forms of support and, therefore, provides the Iraq mission with a greater sense of legitimacy.

NTM-I also illustrates how NATO can operate in a secondary role in an operation.  In Iraq, for example, MNF-I is the leading interlocutor and operational actor, where NTM-I is taking a subordinate, albeit crucial, role.  NTM-I operates alongside the training mission of Multi-National Security Transition Command – Iraq (MNSTC-I).  MNSTC-I, a much larger operation than NTM-I, which also works to provide training to the ISF, however, focuses its training on operational capabilities rather than specifically on leadership training.  MNSTC-I strives to generate ISF and to train them so they can operate independently of Coalition Forces.  Combined with the NTM-I mission, ISF have been provided with a comprehensive security development operation that addresses the major issues that would hinder the growth and improvement of a democratically led military force.

The training mission provides a framework on how the Alliance can actively engage the Russian Federation.  For future training operations, NATO members should consider the participation of Russian troops, use of military materiel, or input of financial contributions.  This engagement will undoubtedly allow for more active engagement between NATO members and the Russian Federation.  Such engagement would improve the interoperability of not only Russian troops, but Alliance forces as well.

NTM-I also provides the framework for a possible European Security and Defense Policy (ESDP) mission in the future that does not involve the U.S.  Similar to NTM-I, an ESDP training mission would not necessitate major contributions from EU member states, and, since it would need some kind of European political consensus, would most likely be much better received publicly than an operation that called for major troop contributions.  Perhaps most importantly, is the idea that a mission similar to NTM-I, which can be led by the EU in the future, provides the premise that the U.S. remains involved while the EU becomes actively engaged or even takes the lead in a military operation abroad.

The Alliance’s Strategic Concept from the 1999 North Atlantic Council meeting states that “the dangers of the Cold War have given way to more promising, but also challenging prospects, to new opportunities and risks.”  NTM-I proves that a mission that may not initially be supported by all NATO member states can still be conducted via a small, albeit crucial, and specific mission that requires minimal resources.  NATO should continue to find ways in which it can provide international support similar to that of its mission in Iraq.