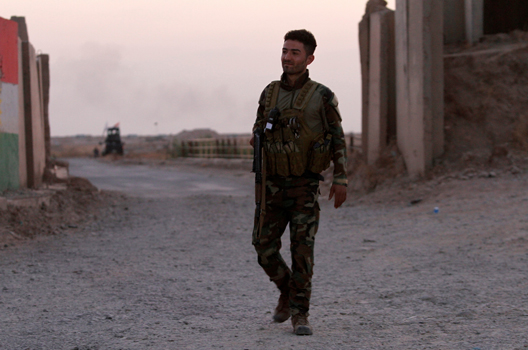 A Kurdish Peshmerga fighter is seen in the Southwest of Kirkuk, Iraq October 13, 2017. (REUTERS/Ako Rasheed)

The military action, which pits two US allies against each other, followed a September 25 referendum in which the Kurds voted for an independent state. The Iraqi government had declared the vote unconstitutional. Kirkuk, which is not part of Iraqi Kurdistan but was under Kurdish control at the time, took part in the referendum. (Kurdish forces had controlled Kirkuk since 2014 when Iraqi forces fled as Islamic State of Iraq and al-Sham (ISIS) militants advanced on the city.)

Explaining the security offensive, Iraqi Prime Minister Haidar al-Abadi said in a statement on October 16 that he acted “in accordance with the constitution to serve the citizens and protect the unity of the country, which was in danger of partition due to the insistence on holding the referendum.”

Harith Hasan, a nonresident senior fellow in the Atlantic Council’s Rafik Hariri Center for the Middle East, discussed the significance of the developments in an e-mail interview with the New Atlanticist’s Ashish Kumar Sen. Here are excerpts from that interview.

Q: Why is Kirkuk disputed and why is the Iraqi army advancing on the city at this point?

Hasan: Kirkuk is multi-ethnic city whose Kurdish population is the largest community (although the numbers are contested because of the lack of a recent census). Kurds argue that Kirkuk is a Kurdish-majority city and should be part of Kurdistan region and a future Kurdish state. Kirkuk’s importance is greatly related to its oil wealth (35,000-40,000 barrels per day are produced and exported from Kirkuk).

For those reasons, Kirkuk was part of the disputed territories and claimed by both sides (the Kurdistan Regional Government [KRG] and the federal government). When ISIS attacked the city, Iraqi federal forces withdrew and Kurdish Peshmerga took full control of the city.

The KRG insisted on including Kirkuk in the independence referendum that was held on September 25 and began dealing with it as part of its territory. Now, coordinating with the main Kurdish faction in the city and its surrounding [territory] (the Patriotic Union of Kurdistan-PUK), Iraqi federal forces, backed by Shi’a-dominated Popular Mobilization Forces (PMF) have imposed their control over most of Kirkuk, its oil fields, airport, and governmental facilities.

Q: What impact is this development likely to have on the war against ISIS?

Hasan: On October 5, Iraqi forces restored control in Hawija, the last stronghold for ISIS in the province of Kirkuk. It is difficult to assess ISIS’ capabilities in the area now, but the current crisis might give jihadists and other militant groups room to breathe and remobilize by taking advantage the distraction of ISF [Iraqi security forces] and Kurdish fighters. Moreover, groups such as the PKK [the Kurdistan Workers’ Party] can also gain support as a result of intra-Kurdish rivalries and the frustration with the established parties.

Q: There are reports that the Patriotic Union of Kurdistan (PUK) made way for the Iraqi troops even as Kurdish President Masoud Barzani’s Kurdistan Democratic Party (KDP) has been involved in the fight in Kirkuk. Is there a split between the Kurdish groups?

Hasan: Yes. There are conflicting reports as to what extent the KDP engaged militarily. It seems that KDP Peshmerga were ordered to withdraw from Kirkuk, perhaps because PUK’s force is stronger in the province. PUK has been going through division and fractioning as a result of the illness and then death of its historic leader, Jalal Talabani. It was obvious that it had deep divisions with regard to the referendum, which is widely seen as a unilateral move by KDP that weakened its rivals.

Two factions, one led by Kosrat Rasoul and the other by Kirkuk’s dismissed governor, Najm Addin Karim, allied with the KDP and Barzani, while the Talabani family, mainly his wife, Hero, and son, Bafel, were displeased by the KDP’s growing authority and the fractioning of the PUK.  The fact that, since 2014, Kirkuk’s oil was being exported via Turkey and its revenue went to the regional government that was dominated by the KDP was another cause for their dissatisfaction. The Talabani family had good ties with Iran, which operated as the main foreign patron of the PUK, while the KDP became too close to Turkey.

All these factors have influenced the Talabani family’s decision to accept the deal of letting federal forces into Kirkuk, a deal brokered by the leader of Iran’s Islamic Revolutionary Guards Corps, Qassem Suleimani. Likely, they are promised a shared administration of Kirkuk and the position of the governor, which they feel they lost since Najm Addin Karim began acting independently.

Q: Can you tell us more about Iran’s role? Is the Popular Mobilization Front part of the offensive on Kirkuk?

Hasan: Qassem Suleimani seemed to have been the main coordinator of this deal, which illustrates the level of Iranian influence on the PUK. So far, PMFs were given a supportive role and not allowed to enter the city. However, some of their factions seemed to have control in other towns such as Tuz Khurmatu.

Q: Both the Iraqi government and the Kurds are US allies. What should the US administration be doing to resolve this crisis?

Hasan: Since the inception of this crisis, the United States was not proactive and had little to offer in terms of finding a political solution. The American focus remains on the military operations against ISIS, but this is a very reductionist approach given that the rise of ISIS was an outcome of political divisions and the unfinished process of state building. Still, I think the United States did the right thing by objecting to the [Kurdish] referendum and backing the federal authority in its actions, when those actions were consistent with the constitution. Now, it is important to make sure that the federal forces refrain from using violence and adopt a more inclusive approach toward Kurdish and Sunni communities.

In the long term, the United States remains the only international actor that is able to bring Baghdad and Erbil to the negotiating table. This time there should be a willingness to give guarantees that are solutions for issues such as the institutional framework of relations between the two, and disputed territories have to be agreed upon based on a clear timetable. However, I should say that with today’s events, it is likely that intra-Kurdish division will be deepened and that Erbil will no longer be able to speak on behalf of all Kurds. This is a substantially different environment that might necessitate a significantly different approach. Meanwhile, as with the case of the war against ISIS, the US government should make it clear that only formal, disciplined federal forces can be allowed to represent the federal authority.

I believe the next phase in what can be considered a state-rebuilding process will be an intra-Shi’a conflict. Abadi will need to assert the authority of the Iraqi government not only in territories claimed by the federal government, but also in Baghdad and the south, that is his Shia base. This means a potential conflict with the Iranian-backed factions. In this case, the United States can play a more visible role in backing the authority of the Iraqi state, which will be necessary as a long-term strategy for stabilization.