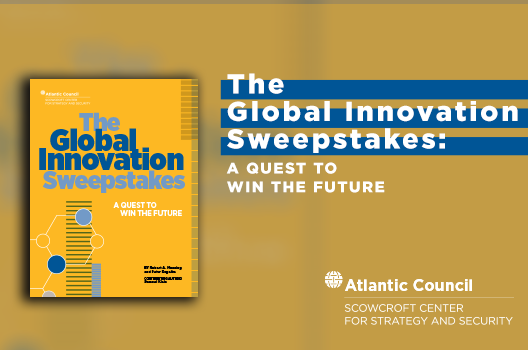 The new international race towards innovation is critical, because “a cluster of new technologies, namely AI, robotics, green energy, biotechnology, and others will do more than just transform science – they will also determine how we all live and function in the not so far off future,” according to Atlantic Council President and CEO Frederick Kempe.

Kempe, speaking at the launch of a new report on innovation, said this “race among the world’s powers to dominate these emerging technologies are what geopolitics were to the 19th and 20th centuries. . . During the coming two decades, the extent to which countries innovate, absorb, and adapt emerging technologies, will drive their economies, shape social dynamics, and determine their respective military capabilities.”

The Atlantic Council’s new report, “The Global Innovation Sweepstakes,” evaluates the state of innovation in ten countries after more than 200 interviews with scientists, technologists, policymakers, and business leaders. The report, released on June 26 by the Scowcroft Center for Strategy and Security in partnership with Qualcomm, examines technology hubs around the world and offers recommendations to increase global innovation.

The report, part of the Scowcroft Center’s Foresight, Strategy, and Risks Initiative, is the second of a two-part series. The first part, “Keeping America’s Innovative Edge,” was released last year and focused on how the United States could reinvigorate its innovative edge. “The Global Innovation Sweepstakes” turns its attention to the state of innovation globally and examines how new technologies will shape the international order.

The report also provides several recommendations for the United States and other countries to harness the power of innovation. Countries should build their human capital by investing in higher education and vocational training, promoting the participation of women and minorities in technology fields, and protecting the social safety net. Globally, the report argues, more can be done to promote innovation through international cooperation. The global standardization of 5G broadband, new WTO rules for digital commerce, resumption of trade talks by Washington with the European Union and China, and joint standards for artificial intelligence and synthetic biology, can all help spur innovation, not just in the United States, but around the world.

Qualcomm, the partner for the report, “sees value in stopping and looking at how others around the world are approaching, developing, and using technologies,” according to Senior Vice President of Global Government Affairs and Public Policy, Nathan Tibbits. Frederick Kempe said that the Atlantic Council’s work with Qualcomm is “a real model of the kind of partnership you can do between the private sector and non-profit.”

Gardner warned the audience that America’s edge is slipping, as developing countries such as India and China continue to grow their domestic research and development (R&D) budgets. The consequences of losing this lead would be dire, he warned. “We saw what happened with the loss of economic opportunities, technology development, and more when the Japanese beat us in the race to 3G.” Gardner specifically noted the United States’ lackluster telecommunications innovation, resulting in “spectrum crunch” in densely populated urban areas and sparse coverage in rural areas. Remarking on his hometown of Yuma, Colorado, he said “we have five bars in our town, it’s just not on our phone.”