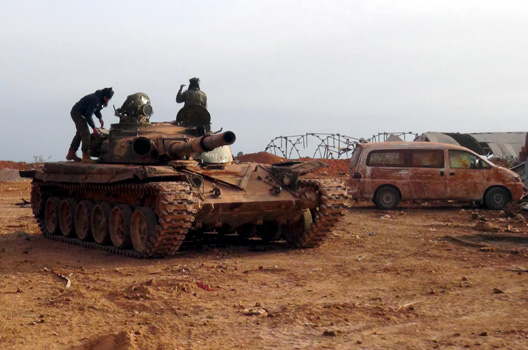 Iran has fueled the war in Syria by providing a steady stream of assistance to Syrian President Bashar al-Assad, but his regime is gradually losing control, says Robert S. Ford, a former US Ambassador to Syria.

“I think we would have been able to get to a negotiation a long time ago if the Iranians had not provided so much assistance, which enabled the hardliners inside the Syrian regime to reject any negotiation,” Ford said April 28 at the Atlantic Council.

On a visit to Jordan last week, Ford learned that Iran has mobilized Afghan Shias to fight alongside Assad’s forces.

“The Iranians, by mobilizing Shia fighters—Hezbollah and now even Afghans—has helped the regime compensate for an increasingly difficult manpower shortage, but over time it is not enough,” said Ford, who quit as US envoy to Damascus in February 2014 to protest what he called the Obama administration’s failed policy toward Syria. He is now a Senior Fellow at the Washington-based Middle East Institute.

Citing the military gains made by Islamic rebels in Syria’s western Idlib province, Ford said Assad is losing control and that his army has been relegated to fighting a defensive battle.

Barrett, a former British diplomat, said Iran must be included in talks on Syria’s long-term future.

“Iran has vital strategic interests, which it makes clear over and over again about its need for links to Lebanon and Hezbollah,” said Barrett.

“I’m sure Iran is not wedded to Assad staying in power, but it is wedded to maintaining some sort of influence and balance in the country,” he added.

As Assad’s grip on power appears to be loosening, a new report by Itani, Defeating the Jihadists in Syria: Competition before Confrontation, urges the US-led coalition to shore up its support for what he termed the “nationalist opposition.” Such a strategy would help the coalition defeat jihadists from the Islamic State of Iraq and al-Sham (ISIS) and Jabhat al-Nusra (Nusra Front).

This strategy includes building on opposition successes in southern Syria; streamlining financing and weapons flows to vetted opposition groups; outreach to vetted commanders; paying competitive salaries to commanders and their fighters to prevent them from defecting to the Nusra Front, which offers significantly higher pay; and building up the opposition’s anti-aircraft capacity and capability.

The United States plans to train and arm 15,000 vetted Syrian rebels—around 5,000 each year for the next three years—to take on jihadist groups in Syria. However, the fact that these trained fighters are not intended to fight the Assad regime will make it more likely that they will be seen “as American mercenaries than champions of the Syrian people,” Itani wrote in his report.

Turkey, which differs with the Pentagon because it favors ousting Assad, has agreed to participate in the train-and-equip plan. Saudi Arabia and Qatar have also agreed to host training sites.

“With greater US support, the nationalist insurgency in Syria can eventually go on the offensive against the jihadists—but pushing for this prematurely would destroy any prospect of success,” Itani wrote in his report.

Itani told his audience that the Obama administration must push a more assertive diplomatic initiative in the face of what he called “a very complex proxy war effort.”

Barrett, however, flagged the dangers inherent in inserting 15,000 Syrian fighters into the conflict, particularly the response of Iran, Hezbollah, and Shia militias to such a decision.

“What is the legal basis for the United States to support action against a recognized regime? There is none,” he said, adding Washington should have solid United Nations backing for such an effort. Besides, added Barrett, “introducing another element just makes it more confused and more messy.”

“There is material with which to work,” he said, adding that Washington must talk to some Islamists to get to a political negotiation. “As we think about how to confront Islamist extremists in Syria, trying to work with the Assad government against them is exactly the wrong tactic.”

Turkey and Saudi Arabia have already ramped up support for Syria’s armed opposition. Ford said that means “American influence and American leverage in the Syrian conflict will diminish.”

A US-led coalition, meanwhile, continues conducting airstrikes against ISIS targets in Syria and Iraq. But Itani said the coalition could do a better job coordinating these strikes with locals on the ground while targeting ISIS on the war’s front lines.

Barrett said the recent round of airstrikes have been an ineffective and expensive use of US military might, calling it instead “a policy of containment.”

Image: Islamist rebel fighters stand on a tank that belonged to forces loyal to Syrian President Bashar al-Assad in Qarmeed camp after the rebels took control of the area April 26. A coalition of Islamist rebels seized the army base in northwestern Syria after a suicide bomber from al-Qaeda's Nusra Front drove a truck packed with explosives into the compound and blew it up. The capture, reported by a rebel commander and social media videos showing militants inside the base, brought the coalition closer to seizing most of Idlib province and moving toward Latakia, the ancestral home of Assad. (Reuters/Abdalghne Karoof)