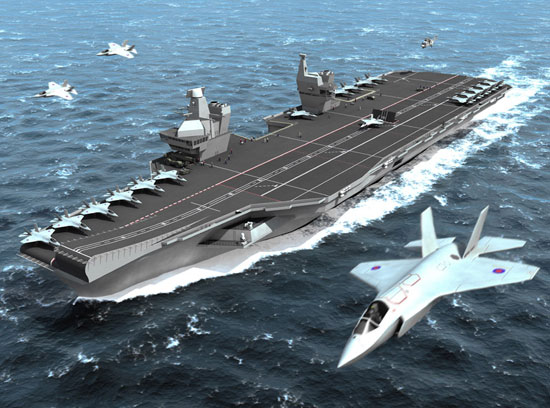 Oh no, not again! The BBC’s Robert Peston has discovered that the two currently under construction and now infamous British aircraft carriers, HMS Queen Elizabeth and HMS Prince of Wales will cost more than originally envisaged. One outlier estimate has the cost as high as £10bn, rather than the £3.9bn budgeted for. This is apparently news.

There are two truisms about Royal Navy capital ships. First, they always cost at least twice the original quoted amount. Second, that almost all British ships with the name Invincible will be sunk.

I got myself into some trouble (nothing new there then) in Washington last year when at a high-level meeting I called the two carriers, HMS Highly Unlikely and HMS Very Improbable. That was before the Strategic Pretence and Impecunity Review during which the government discovered that it would cost more to scrap the two monsters than to complete them.

I have thus far been an agnostic on the carriers, especially as I believe the first order challenge is to extricate ourselves from Afghanistan with a semblance of strategic credibility. However, I have come round to them – and in time both of them. Why? Future defence strategy will be built around the ability to strike and punish rather than stay and stabilise. The carriers will be critical to that.

Furthermore, they are not just aircraft carriers and will perform a range of useful maritime/amphibious tasks. They will also fly a very important flag – the White Ensign – which still implies a vestige of influence. Thus far we have seen everything through the lens of Afghanistan and it has understandably coloured strategy. There is endless debate in London about how to do future Afghanistans better. Unfortunately, the political appetite is such that there is about as much chance of Britain doing a future Afghanistan (at least on that scale) as there is of Sheffield United (a ‘soccer’ club to those uninitiated Americans amongst you) winning the Champions League. I could of course be proved wrong – Sheffield United may indeed win the Champions League.

Rather, post Afghanistan Britain is going to need sufficient military power to a) influence Americans; b) lead European coalitions alongside the French; and c) lead ‘Commonwealth’ coalitions with Australian, Canadian and other partners. Why? Because the epicentre of global competition will be the Indian Ocean and the main focal point of activity will be the so-called Littoral (coastal bits to you and me) where 75% of the world’s population live within 100kms of the coast.

Britain is a maritime power. We have transitioned out of the Cold War focus on the defence of Northern Europe through Iraq and Afghanistan to an extra-European global role – albeit a modest one, as Libya attests. Today, Britain is in the worst of all worlds – too powerful to hide, too weak to effectively influence. Therefore, these floating airfields will serve several useful roles. First, they will act as platforms for the projection of critical air and supporting land power to critical places. Second, they will offer a command leadership role for Britain which is part of influence. Third, they will tell Washington (and others) that Britain is still in the power game.

Furthermore, the two ships are likely to have a life expectancy of over fifty years and will serve as the core of a new Royal Navy which Britain will desperately need, and one which is currently deeply depressed. That navy will in turn be needed as part of a balanced, joint and mutually reinforcing defence strategy in which no one service owns air, land or sea. That is also why we need both carriers. Current plans to sell one of them upon completion completely negate the point of the other one. Even if we have to mothball the Prince of Wales (now to be called Ark Royal) for a time upon completion it will be needed in the 2020s and beyond.

There is a problem. Years ago I wrote a piece called “The Hood Trap” in which I likened the carrier designs to HMS Hood, an un-modernised British battlecruiser that blew up in May 1941 with the loss of almost two thousand souls engaging the German battleship Bismarck. She was the wrong ship in the wrong place at the wrong time. Part of her weakness was her lack of armoured protection. The two British super-carriers will be 65,000 tons each because that is the minimum size needed to effectively operate the F-35 Lightning IIs they are being built for. However, to save costs they will have nothing like the protection of their American equivalents – a typically British compromise. Will a future British Prime Minister risk such valuable pieces of floating British real estate off some foreign shore given the nature of emerging anti-ship missile technology? It is a moot point.

It was Mr Peston who broke the news of the banker’s balls-up which has so blighted all our lives and so damaged British national strategy. Mr Peston is of course the BBC’s Business Editor so it is not surprising that he sees everything in terms of cost and nothing in terms of value, particularly strategic value. However, it is now time to look to the future beyond the mess created by the terminally selfish. Moreover, at least somebody needs a job in Britain and building such carriers offers just that.

Above all, Britain needs a navy worthy of the name. The carriers are about the coming age and will be paid for as such. They may indeed look today like floating versions of the Millennium Dome – Tony Blair’s London folly – but in twenty years time they will be emblematic of a new Royal Navy.

Every now and then even the Brits must take the long view. Now that would be a nice change. The carriers are about the future; Britain’s level of strategic ambition in it, influence over it and for such a goal the branding of power matters.

Pocket superpower or super-Belgium? That is the choice implicit for Britain in the carrier-debate.