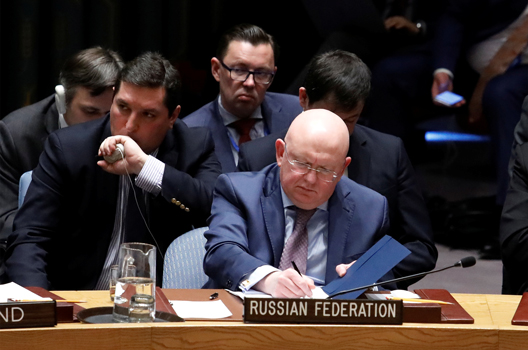 Russia’s reported use of a chemical weapon against a former Russian spy and his daughter in the United Kingdom in March caused an international uproar that echoes to the present day. The incident raised questions regarding the Kremlin’s ongoing use of chemical weapons. While more than forty years have passed since Moscow signed the Biological Weapons Convention (BWC) in 1972 and pledged to discontinue its biological weapons program, it remains unclear if Russia has fully honored its commitments.

When it comes to outlawed weapons of mass destruction, the Novichok program, named for the chemical nerve agent used in the attack on Sergei Skripal and his daughter, Yulia, might only be the tip of the iceberg. During the Cold War, the Soviet Union had the world’s largest covert biological weapons program, which later was inherited by an independent Russia.

A 2017 US State Department report stated that Russia’s fulfilment of the BWC is unclear. The document argued that since 1992, Moscow’s annual BWC submissions have not sufficiently documented whether the biological weapon items were destroyed or diverted to peaceful purposes.

Throughout most of the twentieth century, biological weapons played a key role in Moscow’s military posture. The Kremlin’s program can be traced back to the 1920s when the Soviet Union began working on its first-generation agents such as tularemia, epidemic typhus, and others. While the initial scope of the program was quite modest, as the Cold War arms race gained momentum, throughout the 1950s and 1960s the number of biological weapons facilities mushroomed throughout the country.

However, in 1972 BWC was opened for signature, and three years later it entered into force. Among other things, it prohibited the development, possession, and stockpiling of biological and toxin agents.

The covert Soviet biological weapons industry was unrivalled both in terms of scope and sophistication. It would annually produce tons of anthrax, smallpox, and other agents, which would be stored in facilities across the country. These pathogens were often antibiotic-resistant and designed to be delivered either by bomber planes or missiles.

After the fall of the Soviet Union, former Russian President Boris Yeltsin admitted the existence  and ordered the end of the biological weapons program. It seemed, for a short time, that transparency had ultimately prevailed and that Russia would comply with the BWC.

However, that would not prove to be the case.

In the mid-1990s, the first problems began to spring up. Counter to their promises and despite receiving generous funding from the United States, Russian authorities continuously refused to allow foreign inspectors to visit key military biological facilities of the former Soviet biological weapons program. There still are reportedly at least three installations in Kirov, Yekaterinburg and Sergiev Posad that have remained off-limits to any outside scrutiny since the end of the Cold War. Although Russia said that all research on biological weapons had stopped, this veil of secrecy fuelled suspicions about activities that could possibly be non-compliant with the BWC.

The combination of these factors does not mean that Moscow has an active biological weapons program, or has plans to develop one. However, in light of the Kremlin’s historical record of violating the BWC, the secrecy surrounding Russia’s research facilities and the ostensible strategic value of an offensive biological program, a significant degree of mistrust and suspicion between Russia and the West will likely remain for the time being.

Unfortunately, the question of Russia’s compliance with the BWC has largely been absent from Western diplomacy since the early 2000s. Given their relatively lower military utility, biological weapons have received generally less attention than other weapons of mass destruction. As a result, little, if any, progress has been achieved in resolving the BWC issue.

In order to address Russia’s long-forgotten murky relationship with the BWC and to dispel any unnecessary fears, the West needs to put this issue back on the front burner. The West has to convince Russia to both fix the outstanding BWC compliance issues and to finally open the secretive research facilities for outside inspection. Such cooperation would not only prove Russia’s commitment to the practice of arms control, but would also aid in improving its relations with the West.

At the same time, the West, together with the international community, needs to ensure that the BWC receives necessary updates to an outdated framework. Currently, it lacks a formal mechanism for investigating alleged violations, reducing the treaty to little more than a gentleman’s agreement. A number of pathogens can be used both for civilian and military purposes, therefore countries like the United States have long argued that it is virtually impossible to create a fool-proof verification system. Yet this point of view is only partially correct because it largely ignores success stories such as the United Nations inspection of the Iraqi biological weapons program following the Gulf War of 1991. Therefore, continued talks between the governments of all signatories to the BWC should be held to ensure that a verification regime that is flexible enough to adapt to changing political and technological circumstances could be eventually developed.

Even so, there are alternatives to a formal verification regime. A combination of mandatory confidence-building measures between signatories, closer cooperation between the BWC and the Chemical Weapons Convention, and the development of a consultative mechanism could all strengthen the BWC and improve its transparency. Therefore, with the right political leadership it would be possible not only to give the BWC some teeth—to keep countries like Russia in line—but also to provide it with a bold vision on how to integrate it into a much wider global security framework.

Image: Russian Ambassador to the United Nations Vassily Nebenzia writes during a United Nations Security Council meeting on a chemical weapons watchdog report that concluded a nerve agent was used in the attempted murder of former Russian spy Sergei Skripal at the UN headquarters in New York, US, April 18, 2018. (REUTERS/Shannon Stapleton)