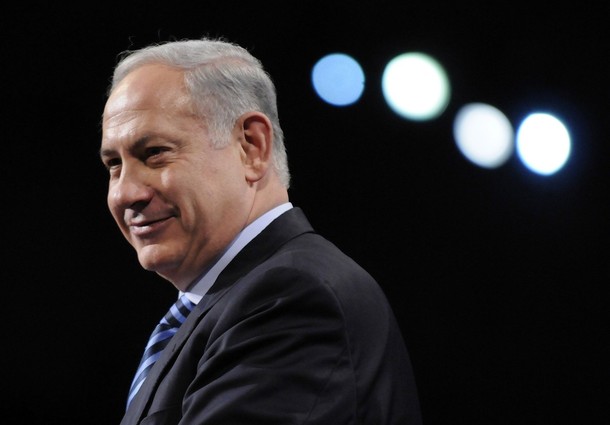 Israeli prime minister Benjamin Netanyahu left Washington last week with a tremendous tactical victory. By skillfully marshaling sympathetic Americans through AIPAC, he managed to deflect the speech by President Obama two days before he arrived that had argued for–even demanded–the resumption of Israeli-Palestine peace talks aimed at creating separate Jewish and Arab states (the 1948 UN mandate for the area) based on the pre-1967 boundaries (nowhere addressed in 1948) in the area as a starting point. “Indefensible,” Bibi roared, and the U.S. Congress dutifully rose from their seats at his address and cheered. Obama was left out on a ledge by himself politically, and Bibi flew out of town a hero to the political right in Israel. In the process, Bibi even appeared to capture the high road of being conciliatory and convincing the political right in the United States that his government indeed did favor peace–just not the one the President proposed. Neat trick, that. Score one for Netanyahu.

The Israeli tactical victory does, however, come with a price. In all likelihood, the real result of Bibi’s tour de force was to drive the last nail into the coffin of a two-state solution to the Israeli-Palestinian relationship. Neither the Palestinians or the Israelis, much less the Americans (who seem more enthused about the prospect than either of the principals), are publicly admitting this consequence, but it looms nonetheless.

Why such a gloomy prognosis? Let’s start by stripping away a bit of the generally pious rhetoric on both sides of the dispute. Both sides argue publicly that they want peace based on “two states for two peoples,” but it is by no means clear that either in fact do. Each begins by saying it is the side that truly wants peace but that the other side does not. It then issues what it argues are not preconditions for successful negotiations but which are in fact deal-breaking conditions it absolutely knows the other side will not accept (which is the real reason for proposing them in the first place). This allows both sides to argue, fingers probably crossed behind their backs, that they want peace but the other side does not. Neither side is exactly lying, but neither side is exactly telling the truth either.

This works out in the current environment. Bibi proclaimed that Israel was willing, even anxious, to see peace, and had made numerous proposals without preconditions on which to proceed. Well, not quite. Netanyahu prefaced this apparent generosity by saying that, of course, the Israelis could not be expected to negotiate with terrorists intent on the destruction of the state of Israel (Hamas) and that Israeli security must be honored in any agreement. Those sound like reasonable positions (members of Congress certainly seemed to think so), but they are also effective deal-breaking preconditions that insure no Palestinian government can possibly enter into negotiations on their basis. Why? The exclusion of Hamas (with which the Abbas government has now entered into a working agreement) means the Palestinian Authority must turn its back on a political body that has considerable support in the Palestinian population. Fatah might want to do that (just as the Obama administration might like to exclude the Tea Party from negotiations on the deficit), but they cannot. The guarantee of Israeli security operationally translates into a permanent Israeli military presence on the West Bank (Bibi admitted that in an interview with Wolf Blitzer, as reported here last week), which is roughly like saying Mexico will agree on a border security arrangement with the United States as long as it can maintain permanent security forces in Dallas. Palestinian demands regarding the disposition of Israeli settlements on the West Bank offer a parallel.

I am not arguing that either of these Israeli positions is unreasonable or indefensible from a strictly Israeli view–especially at the tactical level of security today for the Israeli state. Simply raising these to the public eye in the United States (although not in Israel, where such critiques are much more open) brings squeals of indignation about “pushing Israel under the bus,” in Mitt Romney’s shrill, thoroughly unimaginative term, which I suspect is the exact reaction for which Bibi hoped (and was rewarded).

The real concern is what this kabuki by the Potomac means for an eventual peace settlement between the antagonists based on the two-state principle, and here, the landscape is bleak. There were no peace talks before the recent visit and exchange occurred, of course, and it was Obama’s stated purpose to reinvigorate them. This was probably impossible under any circumstances because, as I have tried to argue here, it is not clear that either side truly wants such talks to progress to that end. The Israelis may be right that the Palestinians ultimately will agree to no outcome that does not entail the disappearance of Israel, and the Palestinians may be correct that the Israelis will never allow a fully sovereign West Bank Palestinian state. Both sides certainly act that way (pious rhetoric to the contrary notwithstanding), and the Netanyahu visit was certainly congruent with the thesis that a peaceful settlement will not occur because neither side is willing to make the honest concessions and compromises to create one.

I know that partisans on both sides will heatedly dispute this assertion and pepper me with evidence of the sincerity–even magnanimity–of their efforts to move toward a peace that would be possible if only the other side was not treacherous on the subject. Such denials (since they generously include condemnations of the honor of the other) do not move the situation toward peace, and I am personally not convinced they are intended to do so. The tactical game is decidedly status quo-loaded.

So, is peace based on a two-state solution dead? For the time being and in the short run, the answer is yes. For the president to try to follow up on his initiative at this time would be an exercise in futility (which was almost certainly Bibi’s intent to demonstrate to him, at which he succeeded) meeting Einstein’ definition of insanity. The only thing that can revive peace based on a two-state formula that represents a reasonable compromise for BOTH sides is a drastic change in power on both sides: a Palestinian leadership that is strong enough to resist and reject its extremists, and an Israeli leadership that accepts the long term demographics of the region and accepts losing part of “greater Israel” as the price for a long-term peace. In the meantime, the sounds of continued construction on the West Bank narrow the possibility that any two-state solution remains physically possible.