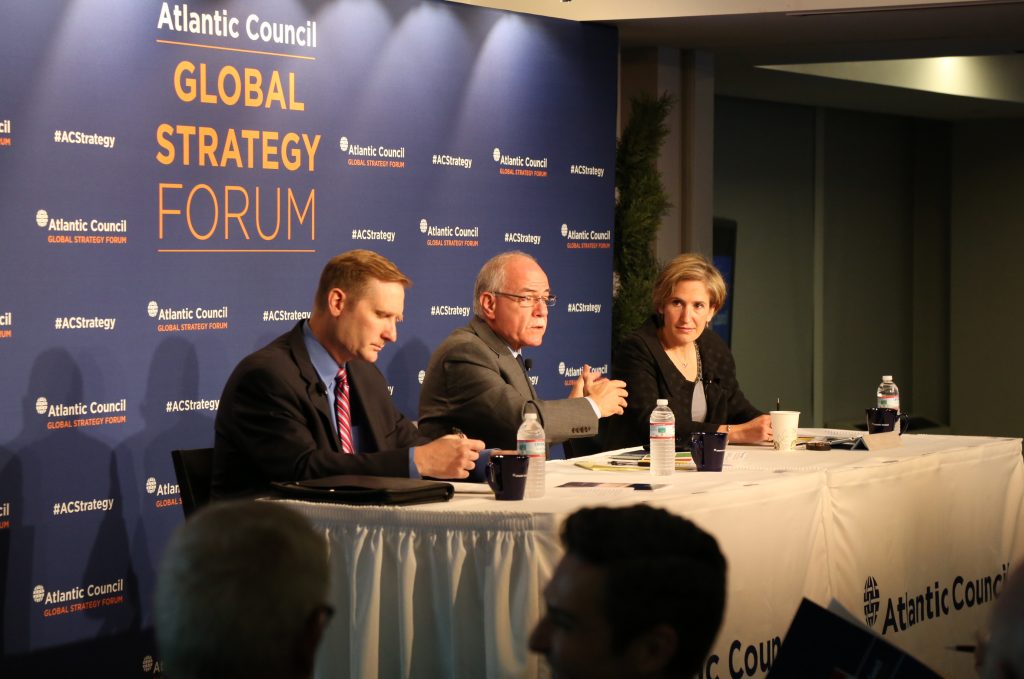 Analysts debate US role in the face of global challenges

President Bill Clinton, speaking in 1996 on the US-backed NATO military intervention in Bosnia, described the United States as an “indispensable nation.”

Scholars debated that premise April 30 at the Global Strategy Forum hosted by the Atlantic Council’s Strategy Initiative in Washington.

Yet Wickett and Preble often found themselves agreeing with each other.

Wickett: ‘The US is indispensable’

To support her argument, Wickett presented a long list of global crises, including terrorism, pandemics, climate change, cyber attacks, humanitarian disasters, economic uncertainty, and the use of weapons of mass destruction (WMD).

“Most, if not all of these, are of vital national interest to the United States. And all will, to varying degrees, require a US role in response,” said Wickett, who was formerly Executive Director of the Geneva-based PeaceNexus Foundation, as well as Director of the US National Security Council’s South Asia division.

Wickett noted that the United States has played a crucial role worldwide—in roles as varied as responding to West Africa’s Ebola crisis and reaching an agreement with China on cutting greenhouse gas emissions.

“Can you imagine a solution to the challenges of Iran’s WMD or North Korea’s WMD without America’s military might backing up American diplomats?” she said.

Citing America’s 2011 military intervention in Libya—where the United States joined a broad coalition of countries aiding revolutionaries on the ground who were trying to topple longtime dictator Moammar Gadhafi—Wickett said that whether or not the United States was in the lead, its assets and capabilities were essential.

Preble: Overdependence on the United States

A poll of the debate audience found a majority believe the United States is an indispensable nation.

Preble argued that it is “simply hard to believe” the suggestion that a single country could be indispensable to the world’s well-being.

“And yet many Americans do believe it and nearly everyone here in Washington believes it,” he said. “If you read what amounts to serious discussion in foreign circles today, one might conclude that the United States isn’t simply the world’s indispensable nation, it is the world’s only nation! Or at least the only nation with the sense and the foresight to even have a foreign policy in the first place.”

But, he said, there is little reason to believe the world will descend into chaos if Washington’s foreign policy focuses on preserving national security and advancing vital US interests.

“That is because there are, in fact, other countries in the world pursuing similar policies aimed at preserving their security, and regional—much less global—chaos is hardly in their interests,” he added.

Noting that the White House’s most recent National Security Strategy paper used the word “leadership” 35 times, Preble warned of a downside to the United States holding itself out as an indispensable nation.

“We clearly have discouraged other countries from spending more on defense and doing more to defend themselves. We have created a system that is overly dependent upon a single country to exercise that power and no reasonable plan to transition to something else,” he said, calling this a mistake because the American people do not support such a position.

However, global stability and growth depend on an assertive US foreign policy, Wickett argued.

As a candidate, Barack Obama vowed to end US involvement in the wars in Afghanistan and Iraq. While he has partly succeeded in keeping that promise, Middle East conflicts—particularly in Syria—have demanded a greater US role.

Wickett said the Obama administration should use a combination of diplomatic, military and economic tools—along with soft power—with the backing of other nations.

“Where would we be if there wasn’t a strong, active US military presence? What would be going on today in the Middle East, in Asia, and even with Russia on Europe’s doorstep?” Wickett mused, though she stressed that this doesn’t mean the United States should act unilaterally, or that the only instrument it uses is its military—or even that it is always right.

One example of a major US blunder, she said, is the Obama administration’s “illogical” opposition to the Chinese-backed Asian Infrastructure Investment Bank (AIIB).

Who would fill the gap?

If the United States doesn’t take the lead in addressing global challenges, who will fill that void?

“The EU, China, Brazil, Russia, Japan—they’re all powerful actors, but none of them have the scope to take on the mantle of stability that America provides globally, even if they acted in concert,” said Wickett.

“Were the US to withdraw from the world to within its borders, were it to have a timid or uncertain foreign policy, and were it not to use its military among other instruments to help provide global stability and security, then the world would be a less safe and a more unpredictable place and that would not be good for global stability and growth,” she added.

Preble did not accept the dichotomy.

“The trends are running decisively against them not, because of US power and US influence primarily, but because there are a number of other Western liberal nations that are poised… to stop the world [from] being taken over by illiberal regimes,” he said.

Preble agreed with Wickett that other nations are unsure what the United States will do, and said this has discouraged them from acting in a responsible way in their own neighborhoods.

“You could argue that the way to solve that problem is for us to be more assertive, for American leadership to be more emphatic and carry through on all of the commitments that they make around the world… but those are many,” he said. “If they all come due at the same time, we are in deep trouble.”

Wickett and Preble also agreed on the need for a multilateral approach to global challenges.

Wickett said she was surprised by the shocked response from most Americans to the idea of the United States leading from behind. That idea is actually a “very positive one,” she said. “The idea that America continues to lead but it leads in coalition, it leads with others, it brings others along, that to me is exactly the kind of leadership we want to show.”