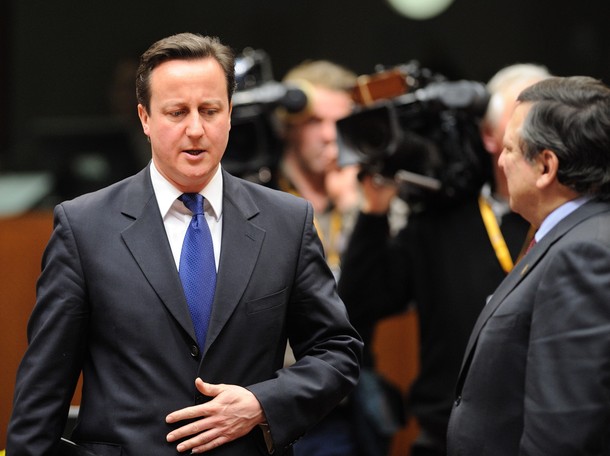 It is not without historical irony that the only other country to stand with Britain over the Fiscal Compact at yesterday’s EU Summit was the Czech Republic which Chamberlain sold out to Hitler at Munich in 1938. Last night Martin Callanan, the leader of British Conservatives in the European Parliament accused the Prime Minister of “appeasement”.

Other Tory Euro-sceptics have accused Cameron of a “retreat” from his 9 December stand when he refused to permit other EU member-states to use the European Court of Justice to enforce the new Fiscal Compact so beloved of Chancellor Merkel.

2012 is not 1938 and on the face of it a mechanism for enforcing greater fiscal discipline amongst the Eurozone members based on stringent austerity is something over which Britain and Germany should be able to agree. The problem is that Cameron seems to have got nothing in return for his ‘adjustment’ which is either shabby politicking, bad negotiating or both. Concessions are never offered in EU negotiations without something in return. London claims that it has secured German ‘assurances’ that Berlin will not press ahead with any new financial services tax. I spoke this morning to my Berlin contacts and as far as they are concerned Berlin has given no such ‘assurances’. Neville Chamberlain of course infamously returned from Munich with ‘assurances’.

However, Britain should have concerns and at the very least Cameron must understand the wider implications of yesterday’s concession should the new Compact ever become a ratified treaty (big if). A precedent has now been established whereby the powers of a German-led EU can now be dramatically increased without the need for a new treaty agreed by all EU member-states. In principle this means that ‘pioneer groups’ can press ahead in all areas of EU ‘competence’, such as defence with a precedent now established for the bypassing of national vetoes.

Cameron also appears to have accepted the principle of a Britain politically subordinate to Germany and France when they choose to act in the guise of the EU. He has partly justified this on Germany’s “fierce” determination to push through the Compact. Since when did German “fierceness” define British policy? If that is indeed the case then London has changed its position not out of pragmatism or principle, but out of weakness.

What all of this reveals is the lack of a Cameron political strategy for Europe other than to keep his increasingly wretched coalition together. What is he actually trying to achieve in Europe? His belief that Britain can influence the single market from outside the Eurozone is dangerous folly. Fiscal Union will sooner or later close the political space that Britain has hitherto occupied. At some point Britain will have to decide; join the Euro (or its survivor currency) or leave the EU. The alternative is more taxation without representation.

The trouble is that whilst Cameron is usually tactically savvy he is strategically crass. Even on 9 December he sold his stand as being solely to safeguard Britain’s financial industry when the political principles at stake and upon which he should have stood were far, far bigger. He simply does not see the bigger picture. Consequently, there is a danger that even if there is a back-room ‘deal’ with Germany it will be seen by other Europeans as the abandonment of all political principle in the face of German pressure; the worst kind of wobbly weakness.

Publicly Cameron places much emphasis on legal redress. Foreign Secretary William Hague said over the weekend that, “If the use of the EU treaties at any point threatens Britain’s fundamental rights under the EU treaties, or damages our vital interests such as the single market, then we would have to take action about that, including legal action”. This morning I went to the web-site of the same European Court of Justice (ECJ) who will be charged with ensuring fair play. Page 86 of the 2010 Annual Report should make for sober reading in Whitehall’s shabby corridors. Under the heading “Actions for Failure of a Member State to Fulfill its Obligations 2006-2010” it shows the UK in breach 21 times, Germany in breach 54 times and France in breach 63 times. Unless the ECJ really places justice above politics (which would be a first) some will be more equal before European law than others.

That said, given the dangers of a catastrophic Euro collapse Cameron’s ‘pragmatic scepticism’ should for the moment be given the benefit of the doubt. However, he must be held to account when he says he will be watching developments “like a hawk’’. Time and again I have heard British Prime Ministers cover retreat with such empty rhetoric. The dangers of a Eurozone collapse are very real and radical action is indeed needed, but not at the cost of turning the Union into an Imperium and Britain into a satellite of Germany.

Sadly, the most worrying of precedents is that henceforth Realpolitik will be the currency of change in the EU and much of it driven by German domestic opinion.

Is this Cameron’s Munich? No, not yet…but it could become so.