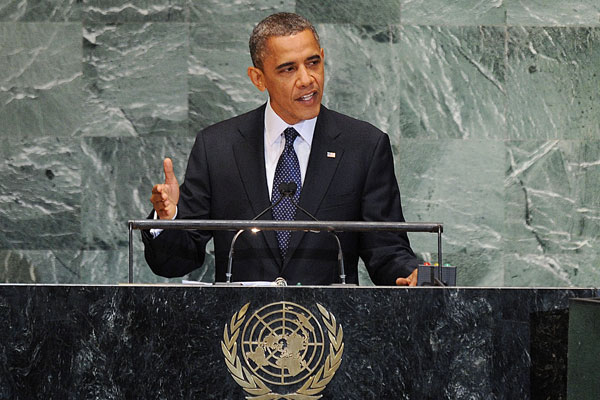 Four Key Lessons for the Rest of the Obama Term

President Barack Obama’s tough speech before the United Nations General Assembly on Wednesday struck a very different tone from his past foreign policy speeches, which often highlighted the drawdown of US military forces from overseas conflicts.

Instead, this time, and before a global audience, President Obama emphasized the importance of using military force.

“There can be no reasoning — no negotiation — with this [terrorist] brand of evil. The only language understood by killers like this is the language of force. So the United States of America will work with a broad coalition to dismantle this network of death,” the president said.

The successful initial airstrikes against ISIS targets in Syria and Iraq represent the first of a long series of complex political, military, and other measures to contain the virulent terrorist group, even as the US addresses a myriad of other vexing security problems.

Coming off his UN speech, the Obama administration now has a golden opportunity to reassess its policies in key regions and capitalize on its newfound momentum abroad. Indeed, if the president and his team can properly harness this moment, historians could look back on the fall of 2014 as “turnaround time” for the president’s oft-criticized foreign policy.

To maintain such momentum, the administration should heed four positive lessons:

First, even as ISIS’ graphic beheading of American journalists and other hostages disgusted and catalyzed the American people, President Obama demonstrated that he could mobilize American popular support on behalf of the use of military force to protect important, if not vital, US interests.

Up to this point, many observers of the administration’s leadership style have disdainfully speculated that the president’s inner circle relied too heavily on poll numbers as central criteria for key decisions on whether and if so how to use military force.

While America’s military community in particular and the American public more broadly are legitimately weary of protracted and costly Mideast wars, they understand that terrorists and other dangers will not remain quiescent until the US feels ready to engage again.

Instead, and to his credit, the president showed that he understands one of the core responsibilities of every commander-in-chief: The importance of informing the public of gathering security threats and dangers, and then of exhorting them to support the necessary actions to comprehensively deal with those threats.

Second, the administration demonstrated effective diplomatic skill in consulting with a wide array of allies and partners as senior officials weaved together a coalition of the willing to counter the ISIS threat. The president and his team effectively used the NATO Wales Summit venue in early September and then continued to work behind the scenes to cobble together key European and Middle East allies to play a variety of critical roles in the broad-based effort — from Saudi Arabia providing a training platform for Syrian rebels to Germany arming Kurdish security forces to the UAE dropping bombs on ISIS targets in Syria.

America’s global network of alliances and partnerships is among its most valuable and unique power assets. Yet, up until this point and despite the president’s own rhetoric, the administration had not leveraged this global network as effectively as it should have. Significant missteps included insufficient consultations with allies on issues of central importance, like missile defenses in Europe and the European Reassurance Initiative. Nevertheless, the administration apparently has learned the hard lessons of diplomatic experience and rebounded effectively.

Third, that the president did not erect artificial timelines on this complex counter-ISIS military campaign was a wise strategic and political move. In reality, as Pentagon planners like to say, “the enemy gets a vote”; more likely than not, this counter-ISIS campaign will extend to the president’s successor and beyond.

President Obama at times has set arbitrary deadlines, as he did in Afghanistan, which can reduce the ability of US forces to achieve their objectives and provide US adversaries with an unnecessary advantage. On the other hand, announcing such deadlines appeared to resonate among the war-weary American public. President Obama did, short-sightedly, publicly take the use of ground forces in combat off the table for the counter-ISIS operation. If ISIS is so dangerous to US national security that it merits an international coalition led by the world’s greatest military power in an operation that may last for years, then surely if battlefield conditions warrant, the judicious employment of US ground forces to achieve specific mission objectives should be a consideration. Chairman of the Joint Chiefs General Martin E. Dempsey said as much in congressional testimony last week.

Fourth, and perhaps most importantly, the president demonstrated renewed, confident, and vigorous American leadership in the world. In this new era, as the nation-state centric order continues to be eaten away and the power of nonstate actors such as ISIS and others continues to grow — and as China and Russia try to chip away at international norms — it is more important than ever for the United States to exercise robust, activist leadership on the world stage. Without assertive US leadership in the world, the nature of the dangers that would befall us, as well as the opportunities that would be missed, would be incalculable.

The Obama administration suddenly has a new lease on its foreign policy life. It should now double down on reinvigorating American leadership: in Asia to help manage the emergence of a great power into the global order; in Europe to counter a recidivist Russia that is growing more dangerous; and to help adapt a Middle East security architecture to focus as much on threats from within states as among them.

If he seizes the moment, President Obama may yet have a chance to restore American global leadership broadly and leave office with the United States in a stronger position in the world than when he entered it.