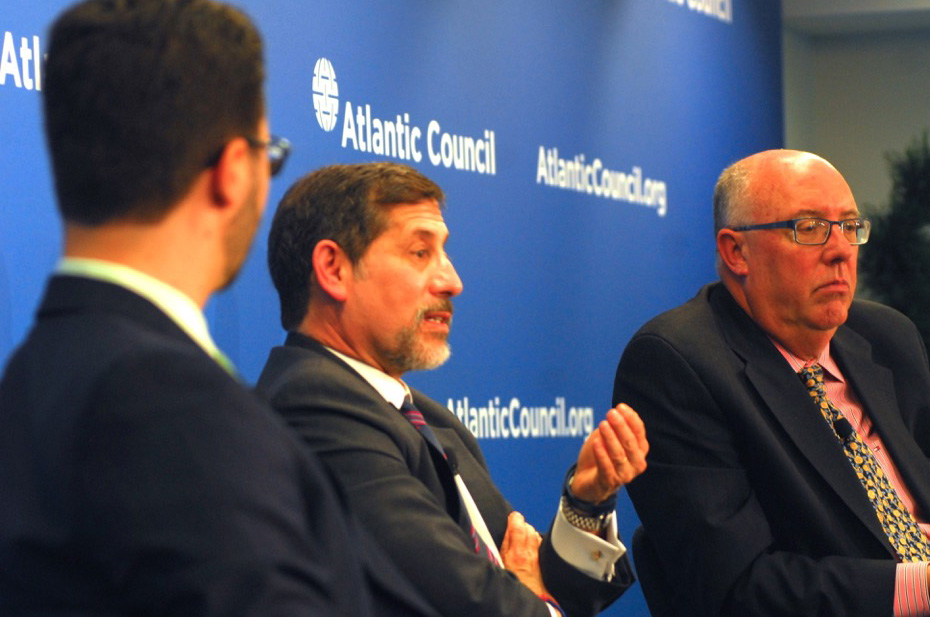 The Islamic State in Iraq and al-Sham (ISIS) may have grabbed global attention with its brutal terror tactics, but al-Qaeda is still a grave threat to US interests, two national security analysts said April 2 at the Atlantic Council.

“Islamic State, by its actions and its very effective communications strategy, has eclipsed al-Qaeda in the American media. But like an eclipse, that’s a very temporary and transitory event,” said Bruce Riedel, a Senior Fellow at the Brookings Institution. “Al-Qaeda remains a very serious threat.”

Riedel pointed to al-Qaeda’s failed September 2014 attempt to hijack a Pakistani naval frigate equipped with ship-to-ship missiles and use it to target US Navy vessels patrolling the Indian Ocean. Had it succeeded, he said, the attack might have caused more long-term damage than the group’s attack on the United States on September 11, 2001.

“This was the most audacious al-Qaeda plot ever, even bigger than 9/11. … [T]hey would have provoked a naval war between the United States and Pakistan,” said Riedel, who spent thirty years as a CIA intelligence officer and advised four Presidents on South Asia and Middle East issues while on the National Security Council.

“If that’s what they were working on last September, what are they working on today?” he added.

While ISIS and al-Qaeda regularly grab headlines for their various acts of terrorism, the former has lately dominated the news cycle through its beheadings of Western hostages, mass killings of Christians, and wanton destruction of ancient relics and historical sites.

Bruce Hoffman, Director of Georgetown University’s Security Studies Program, said al-Qaeda, which was founded by Osama bin Laden nearly twenty years ago and has been led by Ayman Mohammed al-Zawahiri since bin Laden was killed by US forces in May 2011, should not be underestimated.

“Terrorists measure success differently than we do,” said Hoffman, who has studied insurgent movements for nearly forty years and was a Scholar-in-Residence for Counterterrorism at the CIA from 2004 to 2006. “Who would have imagined, in the aftermath of 9/11, that al-Qaeda would still be here?”

A likely explanation for this, Hoffman suggested, is the emergence of franchises.

“Those seventeen groups that have gravitated to al-Qaeda over the past six or seven years existed on their own and chose—on their own—to hitch their fortunes to al-Qaeda’s star. We constantly told ourselves that what was going on in Iraq or Somalia or Nigeria or Libya or Yemen were all local problems, and they’re not,” he said. “The franchise is what has empowered, sustained and contributed to al-Qaeda’s longevity. And now we’ve made the exact same mistake with ISIS.”

ISIS, too, has gained adherents over the past year.

Boko Haram, the murderous terrorist group sowing fear throughout northeastern Nigeria, recently pledged its allegiance to ISIS. Some analysts think al-Shabaab’s April 2 massacre of at least 147 people at a university in eastern Kenya—the country’s worst terrorist attack since al-Qaeda’s 1998 car-bombing of the US Embassy in Nairobi—may be a sign that the Somali-based terrorist group wants to impress ISIS as well.

“The proliferation of franchises poses a fundamental question for the American anti-terrorism community: where do you put your resources?” said Riedel. “There’s a finite number of intelligence officers and drones. What deserves the highest priority? If you make a mistake on that division of resources, the results can be catastrophic. If you put all your eggs into stopping ISIS and draw down what we’re doing in Yemen, don’t be surprised if next Christmas morning you have a very unpleasant surprise in Detroit.”

But he added that today’s rapid breakdown in regional stability—and the rising appeal of extremist ideology—is largely a consequence of the upheavals of the last four years.

“A substantial part of the success of al-Qaeda and ISIS is due to a phenomenon outside our control: the Arab Spring, the subsequent failure of the Arab Spring, the success of the counter-revolution, and the destruction of at least three states: Syria, Libya, and now Yemen,” he said. “Add to that the destruction of a fourth state, Iraq, that we helped precipitate. It’s awfully hard to fight terrorist movements when you are ceding huge quantities of the globe to become chaotic failed zones.”

Riedel praised Saudi Arabia and Jordan for “helping us quite a lot” with intelligence, while Egypt “mostly gives us information about participants in the Muslim Brotherhood.”

“But in places like Libya where we really need help there is no government,” he added.

Saab proposed that the scourge of terrorism will persist as long as the root economic, religious, cultural, and social causes that inspire terrorist groups such as ISIS and al-Qaeda are not addressed.

However, Riedel said the United States and its friends in the Middle East don’t have the time or luxury to wait for the Muslim world to evolve.

“These are huge multigenerational changes. We cannot have a strategy that simply waits for prosperity, democracy, and peace to come to the Islamic world,” he said. “We also need a strategy that deals with the here and now, and that protects us and our allies.”

“Barring a very dramatic change in the situation in Yemen, al-Qaeda in the Arabian Peninsula is looking at basically taking over a substantial part of eastern Yemen. And while there’s a lot of bombing going on in Yemen, nobody seems to be bombing their facilities at this stage,” said Riedel.

“So you could see Islamic State being eclipsed by al-Qaeda,” he said. “The bottom line is both of them will still be very serious threats, and a comprehensive, holistic strategy to defeat them will be, I think, the challenge of the next President.”