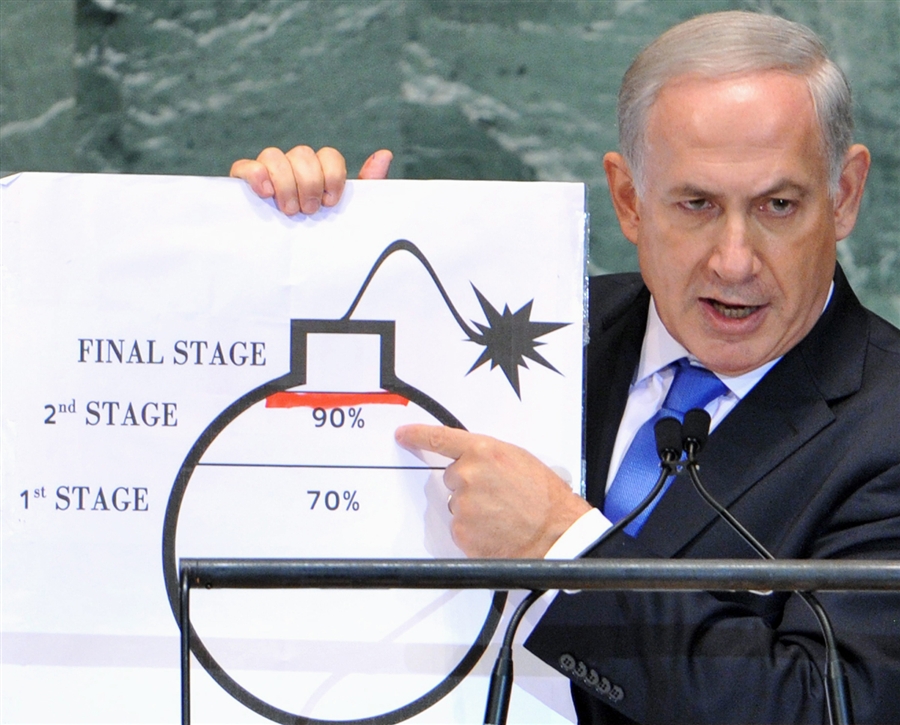 Israel’s Prime Minister Benjamin Netanyahu told the United Nations in September 2012 that Iran is between six and eight months away from having sufficient enriched uranium to make a bomb.

The administration of United States President Barack Obama has preferred to focus more on when Iran will actually have a bomb which is expected to be sometime in 2014 at the earliest. It believes there is more time for intensive diplomacy and tougher sanctions to persuade Iran to make a deal.

Israelis have been skeptical that diplomacy, sanctions and general language from the US about leaving ‘all options on the table’ are enough to persuade Iran to stop well short of a nuclear weapon.

Israel believes the critical time is 2013, not 2014. It says that Iran will reach the level of uranium enrichment needed to make a bomb by 2013 and after that date, it will be up to Iran whether and how fast it will be able to assemble a nuclear weapon.

Israel is, therefore, pushing to stop Iran’s programme well before the US thinks it is necessary.

While US officials believe they will be able to discover when Iran’s Supreme Leader, Ayatollah Khamenei, decides that Iran will go ahead with enrichment of its uranium from 20 percent to 90 per cent weapons-grade level, Israel is anxious that there may not be such a clear ‘yes’ from the top, and that Iran may not test a bomb which can be detected by the West.

Iran may opt, instead, for nuclear ambiguity and keep their bombs ‘in the basement’.

Monitoring the enrichment of uranium at Iran’s declared sites is something that the International Atomic Energy Agency (IAEA) does reasonably well in 30-day intervals.

But Israel is concerned over the absence of any monitoring of Iranian weapons factories where the testing of detonators and related military activities are carried out in smaller laboratories which are difficult to detect by inspection, satellite surveillance or intelligence.

At some point in the timeline, based on Iran’s current enrichment trajectory, there are fears in Israel that even a US attack on the uranium enrichment facilities at Natanz in Isfahan province and on the Fordow site buried under a mountain near Qom, nearly 100 miles south west of Tehran, may not be enough to stop the bomb. To achieve success the US would need to be able to identify, locate and destroy Iran’s weapons factories in Tehran and in other parts of the country.

Israel is pushing the US to take the lead in any military action because an American strike might have more legitimacy than an Israeli attack in the international community, particularly among Arab public opinion in the Gulf states.

The efficacy of a US strike could also make Iran’s efforts to reconstitute the nuclear programme more difficult. An American attack would be more effective with its new US GBU-57 bunker buster bombs droppedfrom giant B-2 bombers than anything Israel could mount.

The US is not only more relaxed over the military option timeline, it also differs from Israel over the actual nuclear threat. The US can live more easily with a nuclear Iran which many in Washington and European capitals believe is a threat that can be contained.

But containment in a region where the US still has allies and responsibilities is likely to be anything but simple.

In the increased global and regional tensions resulting from a nuclear Iran, oil prices could rise and stay high.

Countless hours are likely to be spent by Western national security councils in managing potential crises, such as a move by Iran to impose a partial blockade on the Strait of Hormuz, which would close a vital oil route.

Huge US military resources will be also required to extend the nuclear containment umbrella to at least some of the Gulf states. There are fears that other countries in the region might start their own nuclear weapons programmes, and that groups such as the Lebanese Shia militants, Hezbollah, are likelyto be emboldened by an Iranian nuclear deterrent.

But there are also voices in Washington who are advising against any attack on Iran.

They fear spiralling regional instability, not least from the further radicalisation of Egypt’s Muslim Brotherhood government, and from possible retaliation and terrorist attacks carried out by Iran and its proxies, such as Hezbollah.

Above all, an attack would give Iran an excuse to expel the IAEA inspectors, withdraw from the Nuclear Non-Proliferation Treaty (NPT) and proceed in a more determined fashion towards building a bomb.

US Republican presidential candidate, Mitt Romney, appeared to back Israel taking a unilateral strike against Iran earlier in the US election campaign.

But he was somewhat less hawkish in the second televised presidential debate in October when both President Obama and Mr Romney said they would back Israel if it were attacked. Their views reflect current US public opinion where a majority in a recent poll thinks the US should take a neutral posture on an Israeli attack, neither discouraging nor encouraging an Israeli strike.

Many Israelis are uneasy about the ‘containment’ scenario in which it is estimated there would be a 10 percent probability that they would be hit by a nuclear attack launched from Iran.

Decision-makers in Israel are even more concerned about the geopolitical impact on the region of a rising Iran and a declining America. The answers from Israel are complicated by the absence of any single Israeli view. Some feel the advantages of setting back the Iranian nuclear programme for a couple of years, which a unilateral strike could do, are not worth the human and economic cost of missiles from Hezbollah landing in Tel Aviv.

Mr Netanyahu has faced opposition within his cabinet and from former Israeli security chiefs to any go-it-alone attack on Iran, at least in the near term. Israeli President Shimon Peres is especially concerned with the potential damage to US-Israel relations from any unilateral strike.

It is likely that Prime Minister Netanyahu will adapt his outlook according to any new policies from the next US administration, and new intelligence on Iranian advances in nuclear- related arms.

If Mr Netanyahu is able to form a new coalition after elections in January 2013, he may decide to wait for the collapse of President Bashar al- Assad’s Syrian regime.

Syria is a close ally of Iran and its fall will have a strategic impact on Iran’s regime and on Hezbollah in Lebanon.

But there is a real possibility that Israel will not accept containment as an optioneven if it means attacking Iran without US approval.

Jonathan Paris is a Middle East analyst and nonresident senior fellow with the South Asia Center of the Atlantic Council, and author of “Prospects for Iran” published in 2011 by Legatum Institute, a London-based policy research center. This article originally appeared on Geopolitical Information Service.