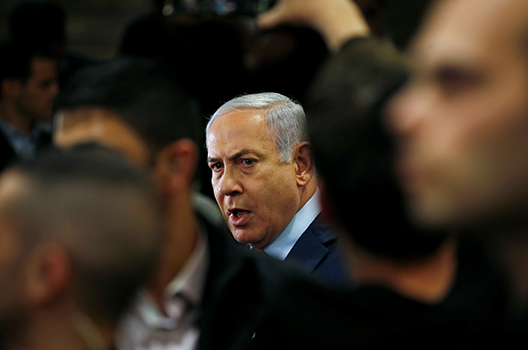 A white flag of surrender was raised aloft over the Knesset just after the stroke of midnight on May 29. Six nail-biting weeks after he was first tasked by Israeli President Reuven Rivlin to construct Israel’s next government, Prime Minister Benjamin Netanyahu was forced to concede defeat and admit that he had failed to cobble together a new ruling coalition.

Faced with a series of options, the incumbent prime minister pulled the scorched earth lever. According to Israeli law, an expired mandate returns to the country’s president, who may then tap a different parliamentarian to try and craft a government. In order to block Rivlin from exercising that prerogative, Netanyahu assembled a preemptive majority to vote for new elections instead. He hopes surely to improve his own prospects when the repeat ballot takes place on September 17.

As the electoral dust settles—and before the proverbial “only democracy in the Middle East” goes to the polls for an unprecedented second time in six months—a number of salient points are beginning to emerge. They shed light on both what happened and what might be expected to occur in the coming few months.

The drama of negotiations to form a new coalition is provided traditionally by parties jockeying for spoils of victory. Center stage was occupied this time by a matter of substance: pending legislation to draft ultra-Orthodox Jews into the Israel Defense Forces (IDF). The dispute between Yisrael Beiteinu (Israel, Our Home) leader Avigdor Liberman—who is demanding passage of a bill that he shepherded as defense minister in 2018 and would allow the conscription of ultra-Orthodox men into the IDF—and representatives of the ultra-Orthodox community surfaced as the ostensible reason for the impasse, which then spiraled into a call for new elections.

Frantic efforts by Netanyahu and his proxies to engineer a compromise came up empty. The result has been a sense of confusion about Liberman’s intentions. Despite his explicit recommendation that only Netanyahu should serve as Israel’s next prime minister, Liberman resisted attempts nonetheless to guarantee that precise outcome. He now faces charges that his intractability was actually premeditated. The only clues to Liberman’s thinking lie in what can be construed as his apparent gains from the intervention.

If to take Liberman at his word—that proposals to bridge his differences with the ultra-Orthodox were unacceptable—then one possible explanation of his behavior could be the defense of principle. But there are other, more cynical possibilities.

Yisrael Beiteinu’s core demographic of Russian-speaking immigrants to Israel is dwindling rapidly. Fewer newcomers are joining its ranks. And those already living in Israel are integrating successfully into society, meaning that a sectarian framework such as Liberman’s has little appeal for them. Political calculus suggests that his clash with the ultra-Orthodox was fabricated in order to rebrand Yisrael Beiteinu and give the party a renewed lease on life as an anti-religious vanguard.

Liberman’s return as kingmaker strengthens his hand as well. A poll conducted on the day after the Knesset dissolved itself found that Yisrael Beiteinu stands to increase its showing from five to nine seats in parliament, which would make it the third-largest faction in the house.

Finally, there is the personal card. Liberman and Netanyahu are longtime associates with a checkered history. Israelis believe that nobody knows better than Liberman how to pressure the prime minister, and that Liberman is almost certainly reveling in this moment of Netanyahu’s humiliation.

One scenario would even have Liberman now delivering a coup de grâce to his old frenemy: the forced delay in seating a working Knesset and swearing in a new government will extend well beyond the deadline of Netanyahu’s scheduled pre-indictment hearing before Israel’s attorney general, Avichai Mandelblit, on corruption charges.

Functional timetables demonstrate that Netanyahu no longer has sufficient time left to fashion much-discussed legislative remedies to forestall his day in court. If the prime minister were pushed aside unceremoniously, the field would then become clear for Liberman (and other opportunistic Netanyahu rivals) to make a bid for filling the leadership vacancy.

The campaign for the 22nd Knesset will be an anomaly in electoral politics. Candidates for public office are used to making promises for which they are not held accountable until much later when the next election cycle begins. Israelis have just experienced a “live fire exercise” under pristine laboratory conditions.

Since the April 9 ballot for the 21st Knesset, Israelis have had the unique opportunity to observe their elected deputies in action. Politicians who pledged to do one thing but did another will have to answer to the scrutiny of their voters.

Netanyahu assured Israelis on national television that he was not at all absorbed with endeavors to guarantee him immunity from prosecution. His surrogates, however, spent the lion’s share of their time invested reportedly in that specific project. Netanyahu’s assertions that he was committed to forming a right-wing government also did not prevent him from holding a garage sale to stay in power—and offering plum positions to the left-wing Labor Party if it would only agree to enlist in his coalition.

Others are vulnerable in a similar way. Moshe Kahlon, the leader of the Kulanu (All Of Us) Party who vowed to run independently, has now joined forces with Netanyahu’s Likud. Some of Kahlon’s original supporters will wander surely toward other pastures. The same phenomenon will conceivably have an impact on Yisrael Beiteinu—blamed now for scuttling the Netanyahu premiership it claimed to desire—and even on Labor, for having even considered Netanyahu’s offer.

The upcoming season is angling to be merger-heavy, with parties on both the right and left exploring consolidation. Neither bloc can afford to waste votes that might go to factions which fail to cross the electoral threshold. The landscape could be altered beyond recognition.

Naftali Bennett, whose New Right platform was less than 1,500 votes short of re-election, is one case in point. Conventional wisdom is that Bennett’s return to the Knesset would have given Netanyahu his majority. Hypothetically, if right-wing ballots overcompensate in September and propel Bennett back into parliament, it’s not implausible that, like a phoenix from the ashes, he might then reinstate his earlier demand for the defense portfolio.

The months ahead will be chaotic for Israel, marked by government paralysis and an ugly, insult-saturated election campaign. US President Donald J. Trump’s aspirations to advance his Middle East peace plan will be relegated to the back of the deep-freeze. Netanyahu will have no bandwidth to engage in conflict resolution and Trump will undoubtedly not complicate Netanyahu’s political future with talk of concessions to the Palestinians.

As for the post-September horizon, all bets are off. The electorate and the issues are unchanged, but the composition of the next legislature and government could generate unexpected outcomes. Confronted with public unrest over what is perceived as a superfluous and expensive replay of April’s ballot, and a step away from become trapped in legal quicksand, Netanyahu—if he wins again—will come up against the appetites of even more ravenous parties next time around. A third election may be waiting in the wings.

Image: Israeli Prime Minister Benjamin Netanyahu speaks to the media at the Knesset, Israel's parliament, in Jerusalem May 30, 2019. (REUTERS/Ronen Zvulun)