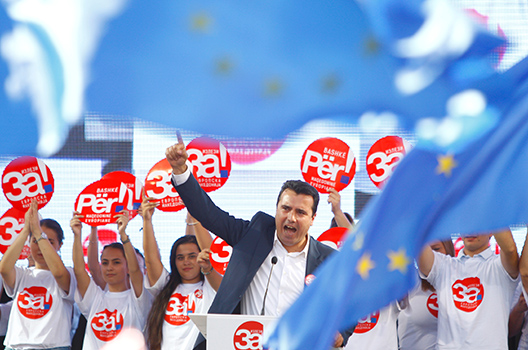 Macedonian Prime Minister Zoran Zaev addresses the people during a march in support of a referendum on changing the country's name and its NATO and EU membership bids in Skopje, Macedonia September 16, 2018. (REUTERS/Ognen Teofilovski)

The anniversary this year of the end of the First World War should, if we needed it, be a reminder of how important the Balkans have been to our past and why we would be alert to their relevance for today.

The way in which that region affected us dramatically and shockingly in the last few centuries should be a wake-up call to pay a lot more attention today.

In today’s world there may be more tinder-box regions than the Balkans capturing the headlines but complacency in the face of danger is the gravest crime politicians can commit.

For my part, a fair chunk of my political career has been focused on the Western Balkans.

In my long years of opposition, I was spokesman on Europe and hence on the dramas involved in the disintegration of Yugoslavia and the miserable horrors of the Bosnian War.

I remember having a long conversation with Sir Fitzroy McLean, the Balkans war hero and Yugoslav partisan commander, about his thoughts on what was happening in Bosnia at that time. He was deeply pessimistic.

I am glad that this wise, brave man was wrong in this case, but it took the involvement of NATO, 65,000 troops, and massive international engagement to stop the violence and recover some sense of stability.

Vast amounts of troops and treasure were invested at that time and we would be dangerously careless if we thought that it was a case of “job and finish.”

The forthcoming elections in Bosnia on October 8 will be another test for that country. People there must look to the future and not dwell in the past with all its shadows.

Passage to Europe’s mainstream will only come when collective national priorities and the interests of the nation come before ancient ethnic rivalries.

It was interesting that on September 8 in the new European football competition, Bosnia played Northern Ireland. Two countries with a past plagued by inter-community tensions and violence playing it out on the football field. Two parts of the world where it is possible to respect the past but not continue to live in it.

I hope it is a good sign for the October 8 elections that Bosnia won 2-1.

My next Balkans chapter was in 1999 and the crisis in Kosovo. A world weary after the Bosnian episode drew breath and Slobodan Milosevic took advantage with a vicious attempt at ethnically cleansing the troublesome province of Kosovo.

My baby-boomer generation of politicians was coming to power. The youthful veterans of the anti-Vietnam War demonstrations were now in high office. Bill Clinton, Robin Cook, Joschka Fischer, Hubert Vidrine were faced with a looming human catastrophe and we knew that, unlike Vietnam this was the right war at the right time and we took firm action.

Not easy. Not tidy. But effective and Kosovo is today at peace.

My next deep involvement in the region was the accession process of Bulgaria, Romania, and Slovenia, into full NATO membership. This was neither straightforward nor uncomplicated.

A fractious referendum in Slovenia and governmental complexities in Bulgaria and Romania all contributed to my diplomatic headaches. But accession, and the drive for EU membership, forced fundamental changes in all these countries which saw them qualified to join the clubs of mainstream Europe.

I pay tribute to a generation of Balkan politicians who, often at the expense of their own political survival, made the reforms which then suited their countries to EU and NATO membership.

Then came the 2001 crisis in Macedonia. This crisis, of a typical Balkan nature and based on a former Yugoslav imbalanced inheritance, swiftly spiraled into what might easily have been another bloodbath.

It did not do so because a small country faced up to the demons, and led by a president, Boris Trajkovski, who had courage, conviction, and transparent patriotism, produced a peace settlement—the Ohrid Accords, which stopped the violence and produced stability for two decades.

On September 30, the people of Macedonia will vote in a referendum to endorse an agreement on a name for the country which will open the doors to membership of NATO and then the EU.

It has been a tragedy that an argument over the name should have held up such an opening, but the fact is that the prime ministers of Greece and of Macedonia have now agreed on a simple solution which will break a generational deadlock and usher in a new chapter in the country’s history.

But it is now or never.

This is an agreement built on dignity and on respect for geography and of history. It recognizes the neighborhood and the background of a region rich in history but also a region looking to the future.

But it is a chance which if lost might not happen for many, many years—if at all. The stalemate has been broken, the chance for the future is there, and the outside friendly world is urging a YES vote on September 30.

That outside world held its breath in 2001 and cheered when Macedonians chose peace and reconciliation over sectarian violence. They are now unanimous in urging everyone to vote and to vote for the future.

Truly it is now or never.

At the moment I head a small group of well-known people, the Ohrid Group, who have an interest in, and an affection for, Macedonia and its people. My friends, former EU Foreign Affairs Chief Javier Solana, with whom I spent many, many days and nights in 2001; former Swedish Prime Minister Carl Bildt; former Bulgarian President Rosen Plevneliev; British parliamentarian Lord Christopher Geit; former Ambassadors Wolfgang Ischinger, Robert Gelbart, and Alain Le Roy; former British General Barney White-Spunner; Atlantic Council Executive Vice President Damon Wilson and many others, form this group of friends.

We are all joined in recommending a strong turnout and a big vote for a future in the EU and NATO through a YES to the agreement.

We all know the country, respect the people, and have been involved deeply in the past. We want the country to be part of NATO and the EU and we know that is impossible without this agreement being endorsed.

Our appeal is genuine, heartfelt, and well-meaning. We urge everyone to vote and to vote YES.

The demons which brought Europe to war a century ago are subdued but not gone. The same tensions which violently ripped across the region spilling turbulence and refugees across the continent have been tamed and calmed for the moment, but without attention they could re-emerge to haunt us again. So attention they must get.

I often recall the words of Goran Svilanović, the first post-Milosevic foreign minister of Yugoslavia and now secretary general of the Regional Cooperation Council, when he addressed the press at NATO HQ.

“I ask you all to reflect on how prosperous the Balkans would be today if the politicians had the same inter-ethnic level of cooperation as the criminals,” he said.

It was a declaration of profound truth and something which should resonate with all of us.

That is a lesson which needs to be top of the agenda in the cycle of elections coming around in the Balkans.

My country, and others in the EU and NATO, have invested multiple lives and much money in bringing peace and stability to the Western Balkans.

We remain engaged and should do more because it is our own neighborhood and the Balkans’ peace and stability and prosperity is as much in our interests as theirs.

Lord Robertson of Port Ellen delivered this speech to the Interparliamentary Union Conference on the Western Balkans in the UK House of Commons on September 10, 2018. He served as secretary general of NATO from 1999 until 2003. He was UK secretary of state for defence from 1997 until 1999 and a Member of Parliament for Hamilton and Hamilton South from 1978 until 1999.