Since coming to power last year, the Taliban has increasingly reverted to form on almost every level. The killing of al-Qaeda leader Ayman al-Zawahiri in a Kabul safe house on July 31 only underscores the group’s continued close ties with the Taliban, particularly the Haqqani network. Taliban leaders are also steadily reimposing the world’s most extreme restrictions by far on women and girls, returning to their old practices of “disappearing” women by closing off their education, restricting their travel, dictating their dress, and limiting their movement.

The juxtaposition of the Taliban’s evident and continuing support for international terrorism and the violation of the most fundamental rights of women and others justifies a next step in demonstrating global rejection of what they stand for: The United Nations (UN) travel-ban waiver, which has allowed Taliban leaders to leave Afghanistan, should be rescinded when it comes up for review by the UN Security Council in mid-August.

While declarations of outrage over human-rights violations and lack of cooperation on terrorism may feel good, all of us during our service in Afghanistan have learned that statements unsupported by actions are generally ignored. Hence, it is imperative that the United States and its partners link actions to words.

Taliban leaders are encased in their own beliefs, focused inward. They have made it clear that they have no intention of changing their basic orientations on issues of core interest to the United States and most others in the international community. While there do seem to be different views within Taliban ranks on the issue of girls’ education, the hardliners are able to bolster their arguments on reactionary ideology by arguing that the international community can be ignored because it doesn’t act with impact.

In fact, since the West did not react in a meaningful way to the closure of girls’ schools, continues to provide humanitarian aid (as it should), and is negotiating to reopen an Afghan central bank, many Taliban leaders may feel that the West is moving toward greater acceptance on the Taliban’s terms despite its refusal to respect women’s rights or broaden representation in its government, and its continuing support for terrorist groups.

Clearly, taking strong, meaningful action against these abuses is not easy. Having pulled out of Afghanistan, the United States has given up most of the tools of pressure, leaving it with limited influence. On moral grounds, the United States does not wish to see a greater humanitarian disaster, so it needs to continue relief measures. The United States cannot starve the Afghan people to pressure the Taliban.

Yet notwithstanding the need to support and protect the Afghan people through continued engagement, the United States still must find actions that make its words meaningful.

One of the few available actions is to end the waiver of the UN travel ban. The Security Council originally waived the ban in 2019 to allow senior Taliban representatives to travel for peace negotiations. But the Taliban now takes advantage of it to allow its leaders to take business-class jaunts to multiple foreign capitals and conferences in efforts to bolster their perceived legitimacy.

When the Security Council renewed the waiver two months ago, it excluded two Taliban education officials who are now subject to the ban once again. While these exclusions were supposed to be a symbolic reaction to the closing of high schools to girls, the symbolism was pathetic: The two officials were among the most junior of Taliban officials and were known to be among those most sympathetic to opening girls’ schools. This minor wrist slap failed to convey any sense of seriousness from the United States or the international community.

The extension of the travel ban waiver comes up for renewal in the Security Council on August 20. The United States should lead in objecting to the extension, thereby reinstating the ban. Admittedly, closing off travel by itself is unlikely to cause the Taliban to make major changes; but it would begin to shift the sense that the United States and its partners on the Security Council are not serious enough. It would convey that the international community is losing patience.

Reinforcement with other actions would be useful, if such can be found, especially as the Taliban’s haven for al-Qaeda has now been exposed. For the moment, reimposing the travel ban is one of the very few actions available.

Some will argue that reapplying the ban will cut off engagement, but this need not be so. First, it only applies to a dozen or so senior Taliban officials. Other officials could still engage internationally. Online engagement is also still available, as is the option to continue talks for international bodies in Kabul, such as the UN mission for Afghanistan. Also, the travel ban has a provision for requesting specific waivers. Further, a new ban could be designed with an exception for travel to Doha, Qatar, where most of the engagement takes place. And if it is in Washington’s interest, US diplomats traveling to Afghanistan could still pursue engagement with the Taliban.

Another argument against reimposing the ban is that some regional states will not respect it. The Russians, for one, may well ignore it. So what? The Taliban leadership will still be dealing with the embarrassment of not being able to show up in European and major Asian capitals, while states that violate the ban can also be embarrassed by criticism. Allowing the possibility of incomplete success to cripple US decision-making would be a mistake. If the United States can only act when certain of success, it will act very little.

There are many issues worth considering when figuring out how to approach the Taliban: terrorism, women and girls, Special Immigrant Visas, and the economy. Yet while there are many steps to consider, if the United States doesn’t take this one, there may not be a next step with impact.

We cannot escape the hard truth that the United States’ poorly devised agreement with the Taliban and ill-judged decision to unilaterally leave Afghanistan created this situation. Now, the United States must show that its multilateral leadership still matters and that it will be committed to the long, hard slog to create a better reality in Afghanistan.

The bottom line remains: If the United States cannot find any actions to support its words, then its words are hollow. The women of Afghanistan will remain unsupported, and the terrorist threats emanating from Afghanistan will remain—no matter what Secretary of State Antony Blinken and other senior US and partner nation officials say.

Reimposing the travel ban is one of the few actions the United States can take to show that it’s serious. It should use this opportunity.

Ambassador Ryan Crocker was the US ambassador to Afghanistan 2011-12. He was also ambassador to Iraq, Pakistan, Syria, Kuwait, and Lebanon.

Ambassador Hugo Llorens was US assistant chief of mission in Afghanistan (2012-2013) and special charge d’affairs (2016-2017), as well as ambassador to Honduras.

Ambassador P. Michael McKinley was US deputy ambassador and ambassador to Afghanistan (2013-2016), as well as ambassador to Brazil, Colombia, and Peru. He is a nonresident senior adviser at CSIS.

Ambassador Ronald E. Neumann was US ambassador to Afghanistan (2005-2007) as well as ambassador to Algeria and Bahrain. He is president of the American Academy of Diplomacy.

Ambassador Earl Anthony Wayne was US deputy ambassador to Afghanistan and coordinating director for development (2009-2011), as well as ambassador to Mexico and Argentina. He is a nonresident senior fellow at the Council’s GeoEconomics Center, a diplomat in residence at American University’s School of International Service, and co-chair of the Wilson Center’s Mexico Institute board. 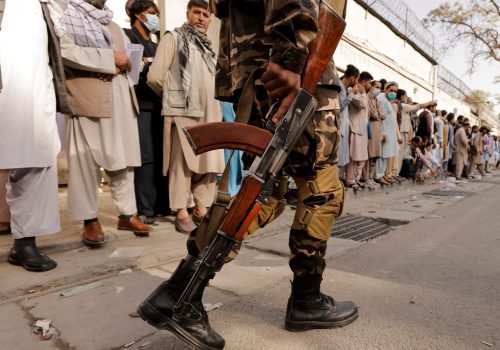 Afghanistan: Where US-Iranian interests may yet intersect

Borzou Daragahi's latest report delves into the Taliban takeover of Afghanistan and how the swift collapse of the US-backed government in Kabul last summer shocked the United States and its influential neighbor, Iran. 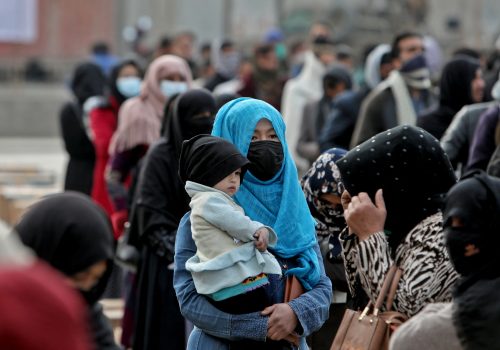 Now that the international community has pledged billions for Afghanistan, it is time to consider creative financial tools that can effectively deliver these funds to those who need them most. 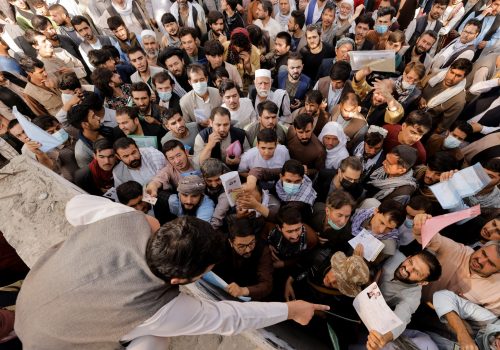 Image: Taliban fighters greet each other outside the Shah-e Doh Shamshira Mosque, in Kabul, Afghanistan, on July 9, 2022. Photo by Ali Khara/REUTERS