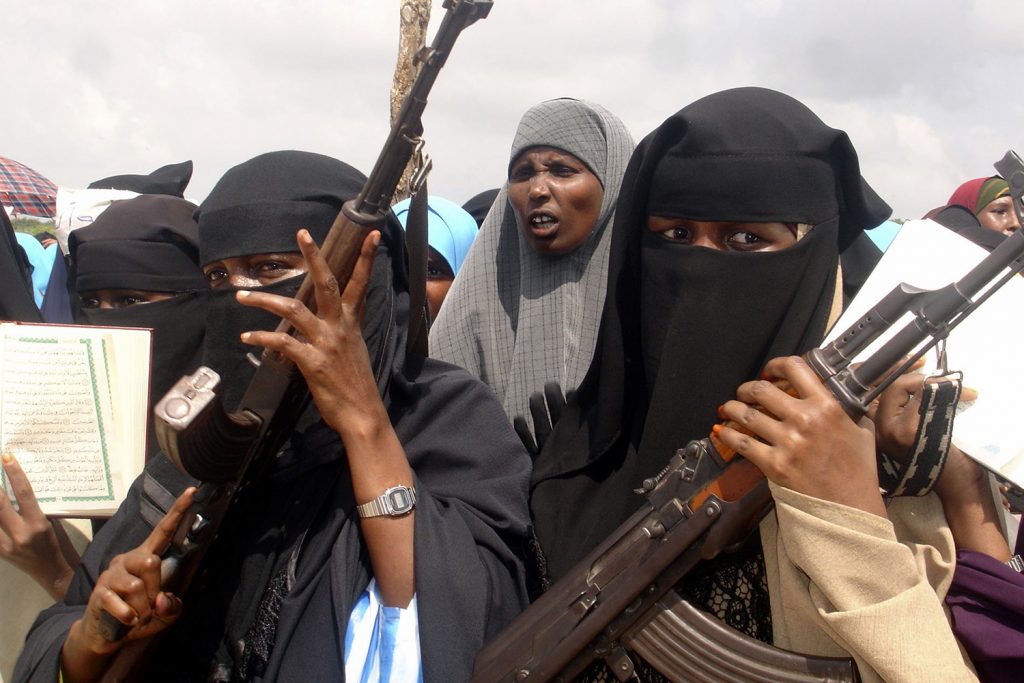 There’s a disconnect between rhetoric and reality when it comes to women’s roles in peacebuilding and development projects.

It struck me while I was working for a non-governmental organization in West Africa. Though the topic animated discussions with donors, institutional and local partners, and the international NGO network, it overlooked an important reality: Some women spurred violence, and they went unrecognized. During my time working in the Lake Chad Basin, I became aware of groups such as jama’atu ahlis sunna lidda’awati wal-jihad (JAS) that are known for using women to carry body-borne improvised explosive devices.

While women are underrepresented in the political and security sectors, and there is a lack of gender experts across these sectors, a more significant reason for the disconnect is that the discussion about women overwhelmingly focuses on them as victims of conflict and political violence without also recognizing them as participants in it. That’s a problem. To design effective strategies to prevent violence and support women in conflict, policymakers need to account for the variety of roles women play in conflict and more closely examine the factors that drive women to act as agents of violence.

There is already a large body of work on the role of women—and gender more broadly—in security. United Nations Security Council Resolution 1325 on women, peace, and security from 2000, for example, outlined the role of women in “the prevention and resolution of conflicts, peace negotiations, peace-building, peacekeeping, humanitarian response and in post-conflict reconstruction.” Researchers have explored the need to integrate women, their experiences, and their grievances into all aspects of security, from analytical studies to the development of policy; the links between female participation in negotiations and long-term stability; and the ways in which ensuring women’s security can improve national and international security. The general focus, as one article phrased it, is on women as “honest brokers” of peace—perceived as “politically impartial mediators” since they are the primary victims of violence and stand the most to gain from peace.

But we should be careful not to look at issues related to women, peace, and security through that sole lens. Doing so creates an assumption that women are less bellicose than men and therefore that they play no role in violence, and casts “young men as enemies by default,” as the scholars Jessica Trisko Darden, Alexis Henshaw, and Ora Szekely put it. Such bias also marginalizes female actors from peacebuilding efforts. Policymakers hoping to develop effective strategies to counter violence and support women should be aware that women are more than mere victims of conflicts.

A growing number of researchers have investigated women’s roles as perpetrators of violence, particularly in organized armed groups (OAGs) and in the form violent extremism. They have demonstrated that the experiences of female combatants go beyond the more accepted image of “female freedom fighters” such as the women of the Kurdish militia fighting the Islamic State of Iraq and al-Sham (ISIS) in Syria. They have shown that women engage in violence for a variety of reasons and are often recruited to do so by OAGs and other violent non-state actors. In their book Insurgent Women, for example, Darden, Henshaw, and Szekely study cases from Ukraine to Colombia and Nigeria to analyze why women participate in violence and the policy implications of that participation for “peace processes and [disarmament, demobilization, and reintegration, or DDR] efforts in recognizing (or ignoring) the role of insurgent women.”

This relatively recent work reveals that women are a heterogenous group of actors. Despite the limited empirical data and analysis, we know that they engage in violence for reasons that include coercion, ideology, a search for physical or economic security, and a drive to escape patriarchal oppression. But since our understanding is incomplete, efforts to include women in peacebuilding efforts—which often focus on reducing barriers to their engagement in initiatives for conflict prevention and resolution—often fail to address the incentives and grievances that drive women toward OAGs. This means that women who engage in violence frequently remain excluded from strategies for conflict prevention and resolution, which instead generally focus on male actors’ experiences.

The lack of policies targeting women’s involvement in OAGs applies to DDR processes too, which also traditionally focus on men’s experiences—failing to acknowledge women combatants and the specific challenges they face within their communities after leaving OAGs. As the experts Anuradha Rajivan and Ruwanthi Senarathne note, “female combatants often have to face the consequences of rape, real or presumed sexual activity, pregnancy, domestic violence, fear, and negative stigmatization of being ex-combatants who have killed and generally lived lives outside of conventional social norms.” The lack of tailored DDR policies for women may explain why, in some cases, former female combatants reintegrate into OAGs after escaping them.

The lack of understanding about what attracts women to such groups also drives policymakers to pursue strategies that encompass broad and gender-blind elements like addressing high youth unemployment or reinforcing rule of law. While tackling these issues is critical to address the root causes of conflicts, doing so doesn’t account for the specific factors propelling women toward violence. That, in turn, renders conflict prevention and resolution strategies incomplete, biased, and inefficient.

These are just a few of the policy repercussions of neglecting to acknowledge women’s active role in conflict. Policymakers and those who develop peacebuilding and development projects must expand their analytical framework for understanding the role of women in security and consider the political, social, ideological, and economic reasons behind women’s participation in conflict. In developing security strategies, they could also include local female actors such as community and civil-society leaders to harness their knowledge of women’s specific experiences, grievances, and needs. Perhaps most importantly, project developers should treat gender issues not as an “add-on” designed to meet funding criteria, but as a matter to be addressed at the earliest stages of creating their peacebuilding, development, and humanitarian initiatives.

Twenty years after its creation, NATO should affirm the strategic significance of the Women, Peace, and Security Agenda and define what it means for an era of great power competition.