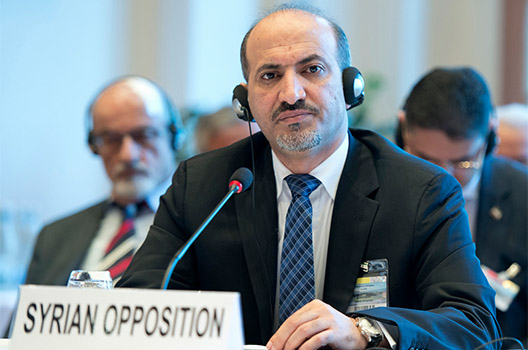 On his first visit to Washington this week, Ahmad Jarba, president of the Syrian Opposition Coalition (SOC), has faced a daunting challenge: convincing the Obama administration that his organization deserves more support, including lethal weaponry, to counteract the brutal tactics of a regime that appears to be winning Syria’s three-year-old civil war.

U.S. officials admit that their policy toward Syria is not making much headway toward its declared goal of convincing Syria President Bashar al-Assad to step down.

The Geneva diplomatic process that was supposed to agree on a political transition fell apart in February and Assad’s forces – assisted by Russia, Iran and Hezbollah – are continuing to advance.

On Wednesday as Jarba spoke in Washington, beleaguered rebels were evacuating Homs, once a stronghold of the uprising, under a temporary truce negotiated by the United Nations and Iran.

Meanwhile, Assad is planning to run in June for a third seven-year term. As a senior administration official put it during a background call on the Jarba visit, “the current conditions, the current asymmetry does not provide the kind of political calculus needed to get that type of negotiated, serious political process underway.”

Jarba and the SOC are in a classic chicken-and-egg situation.

The group has to prove it has traction on the ground in Syria in order to get more outside support. But without more backing, especially from Washington, it is unlikely to achieve that traction.

Jarba, in comments at the U.S. Institute of Peace (USIP) on Wednesday, said his group was trying to move an interim government it set up in Turkey into “liberated” Syrian territory.

But without weapons to counter the barrel bombs and other airstrikes by Syrian forces pummeling Syrians every day, “that stops us from making any progress in these areas,” he said.

The Obama administration recognized the SOC – then known as the Syrian National Council – in December 2012 as “the legitimate representative of the Syrian people” and the group bills itself as moderate and pro-Western.

The U.S. has openly provided nearly $300 million in nonlethal aid – and covertly some anti-tank weapons through Jordan – to the SOC and its military arm, the Free Syria Army (FSA), but stopped short of supplying the portable anti-aircraft weapons that could alter the balance of power for fear that the arms could wind up in the hands of Islamic extremists and potentially menace the U.S. and its allies.

A meeting Thursday with Secretary of State John Kerry did not seem to move the SOC closer to getting a U.S. commitment to provide arms. But Jarna did not publicly criticize the U.S. position.

“We would also like to thank the U.S. for its support for the struggle of the Syrian people, for freedom and democracy and also to lift the injustice and fight the oppression and dictatorship that Bashir al-Assad is engaging in,” Jarba said after the meeting.

Jarba and his delegation, which includes the chief of staff of the Supreme Military Council of the FSA, Brig. Gen. Abdul-Ilah al-Bashir, have to change Washington’s views before they can hope to change that of Assad or his Russian and Iranian patrons.

That is unlikely, given how risk-averse Obama and the American public are to entangling the United States in new military adventures in the Middle East.

U.S. goals in Syria, as listed by State Department spokeswoman Jen Psaki on Wednesday, are “to counter violent extremism and prevent the establishment of a terrorist safe haven … avoiding the collapse of the Syrian state and its institutions … preventing the transfer or use of chemical weapons … to bolster the security and stability of Syria’s neighbors … to alleviate humanitarian suffering and … to work toward a negotiated transition.”

It is telling that Psaki put political transition last.

In fact, the U.S. is counting on Assad to complete removing chemical weapons from Syria under an agreement brokered by the Russians last year that averted U.S. air strikes.

And while Assad is reviled for his barbarism, Syrian rebels include violent elements that have also committed horrendous human rights abuses.

The SOC itself suffers from a lack of dynamic leadership.

A slight figure who spoke in Arabic without notes on Wednesday, Jarba does not exude charisma. Indeed, he deferred several questions to a more compelling speaker, Michel Kilo, a Christian and long-time human rights campaigner.

Jarba appears to have been chosen to head the SOC largely because the Saudis like him; he is a member of the prominent Shammar tribe which also has branches in Saudi Arabia and Iraq.

On Wednesday, he was at pains to stress that the SOC is inclusive and nonsectarian. He said that Qamishli, the northern Syrian town where he was born, is home to Arabs, Kurds, Circassians and Christians and that he attended a Protestant school.

“Minorities existed [in Syria] before Bashar and will continue to exist after Bashar,” Jarba said, referring to the Christians, Alawites and other non-Sunni groups in Syria.

But many members of these groups continue to cling to Assad, not out of love, but out of fear of the alternative if his Alawite-dominated regime falls.

Al-Qaida-linked groups and even more extreme organizations such as the Islamic State of Iraq and the Levant are seeking a Syria that would severely discriminate against ethnic and religious minorities and even majority Sunnis who do not want to live under strict Islamic law.

Many Alawites, in particular, fear that they would have no future in a post-Assad Syria.

Ryan Crocker, a former U.S. ambassador to Syria as well as Iraq, Lebanon and Pakistan, told the Council on Foreign Relations last week that the U.S. goal in Syria should be to convince Alawites – a sect that is an obscure offshoot of Shiite Islam and that has ruled Syria for more than four decades  – that they can retain power even if Assad resigns.

It would be a “grave mistake,” Crocker said, “if our policy were aimed at flipping the tables and bringing a Sunni ascendancy in Damascus.”

With more than 150,000 people dead and nearly 10 million displaced over the past three years, the main goal should be an end to the bloodshed. But that is unlikely to come anytime soon.

“It may be the path of least resistance now to do something significant that would alter the balance of power on the ground,” he said.

Otherwise, the latest U.S. pledges of support for the SOC will be essentially “empty gestures,” Hof said. “It’s never the announcement. It’s always the follow-up.”