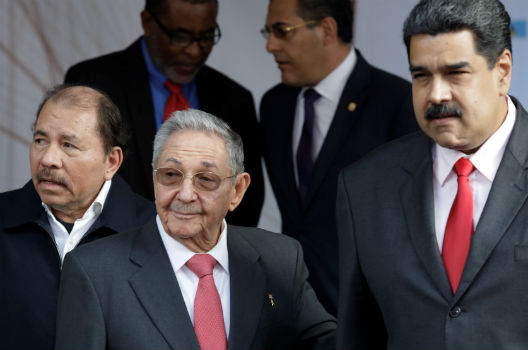 US National Security Advisor John Bolton labelled Cuba, Venezuela, and Nicaragua the “Troika of Tyranny” in a November 1 speech outlining the Trump administration’s determination to combat authoritarianism in Latin America. Speaking at Miami’s Freedom Tower, a US national historic landmark due to its role in housing a processing center for Cubans fleeing to the United States, Bolton declared that under US President Donald J. Trump, the United States “will no longer appease dictators and despots near our shores.”

Bolton’s speech in a critical swing state for both the US Senate and the US House of Representatives just six days before the midterm elections can be seen as an attempt to shore up Republican Party support among the politically powerful Cuban-American community in southern Florida.

Cuba, Nicaragua, and Venezuela have taken part in “the same oppressive behavior of unjust imprisonment, torture, and murder,” according to Bolton. This “triangle of terror,” Bolton argued, “is the cause of immense human suffering, the impetus of enormous regional instability, and the genesis of a sordid cradle of communism in the Western Hemisphere,” he added.

“John Bolton made it clear today where the administration is headed on Venezuela, Cuba, and Nicaragua,” Jason Marczak, director of the Atlantic Council’s Adrienne Arsht Latin America Center, said.

“His forceful stance is no surprise,” said Marczak. “The US government has increasingly sought to ramp up pressure on all three countries. Bolton has long favored a stronger position.”

While scathing in his criticism of Cuba, Nicaragua, and Venezuela, Bolton welcomed the election on October 28 of far-right candidate Jair Bolsonaro as Brazil’s next president. Bolton described Bolsonaro as a “like-minded” partner. Bolsonaro has a history of making incendiary remarks about women, minorities, and gays. The president-elect has also promised to get tough on crime and corruption.

Bolton’s harshest rhetoric was reserved for the regime in Havana, which he accused of silencing “dissidents and suppressing every kind of freedom know to man.” Bolton promised that the Trump administration would “not glamourize Marxist guerillas to promote a delusion of our own glory. Our concern is with sanctions not selfies.”

Many of Bolton’s comments were highly critical of the Obama administration, which in December 2014 restored full diplomatic relations with Cuba and opened an embassy in Havana for the first time since the Cold War. “Members of this administration will never take a picture in front of an image of Che Guevara like Barack Obama did,” Bolton said in reference to Obama’s trip to Havana in March 2016.

Last June, Trump—a longtime critic of Obama’s rapprochement with Havana—announced that he was “cancelling the last administration’s completely one-sided deal with Cuba.” Despite these words, the embassy remained open and only restrictions on American travel to Cuba were reimplemented.

Bolton explained that “the United States is enforcing US law to maintain sanctions until among other things, all political prisoners are freed, freedom of assembly and expression are respected, all political parties are legalized, and free and internationally supervised elections are scheduled.”

Bolton also assured the audience that the administration has “scaled back our embassy personnel in Cuba,” and amid reports of potential microwave strikes on US Embassy personnel in Havana, that the United States “will not allow our diplomats to be targeted with impunity.”

Bolton also took aim at Venezuelan President Nicolás Maduro for “using the same oppressive tactics that have been employed in Cuba for decades.”

Maduro has presided over an economic and societal collapse in the country, which has worsened in the last two years. Bolton stated that “more than two million desperate Venezuelans have fled Maduro’s oppressive rule since 2015.”

Hundreds of thousands of protesters flooded the country’s streets throughout 2017, clashing with soldiers and police officers throughout the summer months. At least 125 people died, and thousands were injured in these clashes. On July 31, 2017, the US Treasury Department froze Maduro’s assets in retaliation for his attempt to replace the opposition-led National Assembly with an illegitimate National Constituent Assembly.

An Atlantic Council poll in April 2018 found that 81 percent of Venezuelans believe the country is an humanitarian crisis and 77 percent disapproved of Maduro’s job performance. In May 2018, Maduro won re-election in a landslide amid widespread allegations of fraud.

Bolton stated that the “United States will not tolerate Maduro’s undermining of democratic institutions and ruthless violence against innocent civilians.” He detailed existing sanctions the Trump administration has placed on more than seventy Venezuelan individuals and entities, including Maduro, and announced that Trump has just signed a new executive order targeting Venezuela’s gold trade.

Marczak welcomed the new sanctions as “in Venezuela, illicit flows of money that benefit the Maduro regime to the detriment of the Venezuelan people must be stopped.” Marczak added that pressure must continue so that there can be a restoration of “democracy, human rights, and the conditions so that millions of Venezuelans are no longer forced to flee.”

Bolton also condemned the Nicaraguan government for its “violence and repression against its citizens and opposition members.”

The US government slapped sanctions on three Nicaraguan officials in July for their role in violence against protesters in the Latin American nation. Nicaraguans have been protesting the decision by President Daniel Ortega’s government to change social security and other internal repression measures. A United Nations human rights delegation was kicked out of the country on August 30 after it released a report criticizing the Ortega government for human rights abuses against demonstrators.

The United States has been in vocal opposition to Ortega’s government since the former Cold War leader returned to power in 2007. Ortega has been openly supportive of both Iran and neighbor Venezuela.

“Ortega and his allies have completely eroded democratic institutions, stifled free speech and impose a policy of jail, exile, or death for political opponents,” Bolton said, adding that “free, fair, and early elections must be held in Nicaragua and democracy must be restored to the Nicaraguan people.”

Bolton’s comments make it “very clear that these sanctions were just the beginning,” María Fernanda Pérez Arguello, an associate director in the Adrienne Arsht Latin America Center, said. With his speech, she argued, “John Bolton and the administration are sending clear signals that they are committed to helping the Nicaraguan people restore their long-lost democracy.”