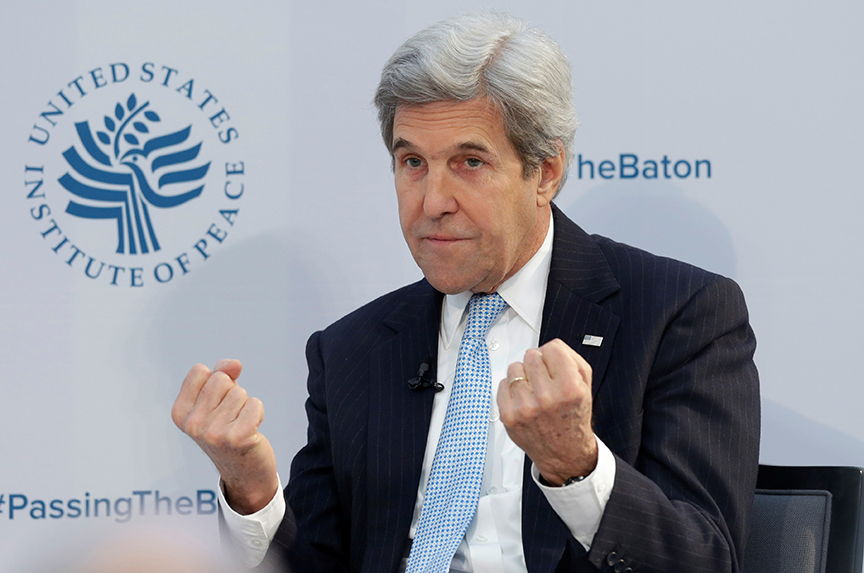 Secretary of State warns against ‘factless political environment,’ says the United States has been leading

US Secretary of State John Kerry on January 10 took a thinly veiled swipe at US President-elect Donald Trump while warning of the perils of living in a “factless political environment” and expressing consternation that the process for nominating officials to serve in the next administration is being flouted.

“Every country in the world better… start worrying about authoritarian populism and the absence of substance in our dialogue,” Kerry said, noting that there is a long, well-defined history of what happens when economic fear is exploited by “simplistic sloganeering politics.” Kerry spoke at an event at the US Institute of Peace—“Passing the Baton 2017”—that was co-hosted by the Atlantic Council.

Commenting on the ongoing political transition in Washington, Kerry said it has been smooth mainly because there has not been a significant amount of high-level interaction between the Obama administration and the incoming Trump administration. He said he expects to, but has not yet, met his presumptive successor, ExxonMobil Chief Executive Officer (CEO) Rex Tillerson.

The Senate Foreign Relations Committee is scheduled to hold a confirmation hearing for Tillerson on January 11. In fact, several of Trump’s Cabinet picks are to undergo confirmation hearings this week. Democrats complain that many of these picks have not completed or submitted all of the financial disclosure and ethics paperwork that is required for the confirmation process to get underway.

Commenting on this controversy, Kerry said: “It is quite amazing to me when I think of the hoops I had to jump through with respect to papers submitted and documentation and tax returns and a whole bunch of things. Suddenly, that’s all gone, poof. It’s not that important.”

In a discussion with Judy Woodruff, co-anchor and managing editor of PBS NewsHour, Kerry also criticized Trump’s penchant for delivering biting policy pronouncements on Twitter. “If policy is going to be made in 140 characters on Twitter and every reasonable measurement of accountability is being bypassed and people don’t care about it, we have a problem,” said Kerry, adding that this is true not just of the United States, but globally as well.

The secretary made clear his frustration at the level of political discourse both in the United States and abroad. He said it was “stunning” that over the course of three presidential and one vice-presidential debate in the recently concluded elections in the United States not one question on climate change was asked. “This is a huge problem,” he said.

Kerry delivered a forceful defense of US President Barack Obama’s administration and addressed the criticism that it has led from behind. He noted that the administration had, in fact, led the way on the world stage on a number of critical issues, from brokering a deal that cuts off Iran’s path to a nuclear weapon, to a historic agreement aimed at addressing the challenge of climate change, to working with Russia to take chemical weapons out of Syria, to ensuring the freedom of navigation in the South China Sea, to ending a failed five-decade US policy and restoring diplomatic ties with Cuba, to maintaining Western sanctions on Russia for Moscow’s actions in Ukraine, to fighting the spread of the Ebola virus, and to ramped up support for NATO frontline states.

“The United States is more engaged in more places, simultaneously dealing with more conflicts than at any time in American history and, I believe, with consequence, with greater outcomes,” he said.

The Obama administration has been criticized for its handling of the war in Syria, which since 2011 has claimed more than 470,000 lives and created almost five million refugees. In particular, Obama has been criticized for retreating from his red line—if Syrian President Bashar al-Assad used chemical weapons, it would warrant US military action.

Kerry said a “mythology” has grown up around the red-line issue. “President Obama never retreated from his red line. He never changed his mind about his readiness to bomb Assad to make it clear you don’t use chemical weapons—never,” said Kerry.

However, the secretary conceded that the perception about the red line issue had hurt the United States. “I will readily acknowledge that this notion that the president didn’t follow through took hold and it has cost us,” he said. “Yes, it became a perception that became a sort of diplomatic reality and it fed this notion that the administration wasn’t there to support its ally. But it’s just not accurate.”

Kerry also noted that it was his remark at a September 2013 press conference in London to a question on how Assad could avoid US military action that led to the United States and Russia working to remove chemical weapons from Syria, and no US military retribution for Assad’s use of chemical weapons.

Absent a deal on chemical weapons, Obama was ready to bomb Syria provided he had the backing of the US Congress, Kerry added.

Kerry slammed what he described as “revisionist commentary” saying that there was no way that anything the Obama administration could have done would have changed what is happening in countries of the Middle East and North Africa that have been buffeted by Arab Spring uprisings since the start of this decade.

On the campaign trail, Trump vowed to “dismantle” the nuclear deal with Iran and has, since his election on November 8, said he is “studying” whether to withdraw the United States from the climate change accord that was struck in Paris in 2015.

Kerry expressed confidence that in the end “common sense will win out.”

Kerry said that if the Iran deal—a multilateral agreement that includes Russia, China, the United Kingdom, France, and Germany as partners—were arbitrarily undone it would increase the likelihood of conflict and diminish US credibility, as would be the case if the United States were to back out of the Paris climate deal.

He said there is an urgent need for an aid program along the lines of the Marshall Plan—a multibillion-dollar US initiative to rebuild Western Europe after World War II—for the most critical states of the world which are struggling with large populations of young people that are susceptible to extremist indoctrination.

Kerry warned against an America-first approach—one touted by Trump—and said that there is an urgent need to ramp up US investments in foreign aid. “If we don’t decide that there is no longer an over there and an over here, there is just an everywhere and we are all connected, we are in trouble,” he said.

Image: US Secretary of State John Kerry delivered remarks at the US Institute of Peace’s “Passing the Baton 2017” conference in Washington on January 10. The Atlantic Council was a cosponsor of the event. (Reuters/Yuri Gripas)