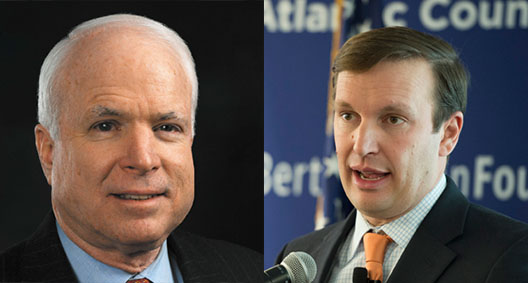 Senator McCain to Speak at the Council on Thursday

Wednesday, U.S. Senator John McCain (R-AZ) released a statement condemning the use of violence by Ukrainian authorities against peaceful demonstrators in Kyiv, Ukraine. His statement ended with:

“Those brave men and women should know that they are not alone. Their friends across the world stand in solidarity with them. We will keep the world’s attention on Ukraine’s struggle for freedom, justice, and opportunity, and we will demand consequences for any crimes perpetrated against Ukrainians who are peacefully exercising their fundamental human rights.”

Friday, McCain got on a plane for Kyiv. The senator is the highest-ranking US official to visit Ukraine during this crisis. Brian Rogers, spokesman for McCain told The Daily Beast on Friday, “Senator McCain is traveling to Ukraine to meet with government officials, opposition leaders and civil society at this critical time as Ukrainians work to determine their future.”

Senator Chris Murphy (D-CT), who chairs the Foreign Relations Subcommittee on European Affairs, and three subcommittee members, Ron Johnson (R-WI), Jeanne Shaheen (D-NH), and Dick Durbin (D-IL), put forth a resolution (full text below) to show the Senate stands with the Ukrainian people as they call for closer alignment with the European Union, especially in the face of the violence from their government. The resolution goes to far as to call for sanctions against those responsible for any further acts of violence against the peaceful demonstrators. The Senators said, “It’s unacceptable that these peaceful demonstrations are being met with aggressive resistance and even violence by the Yanukovych government. This resolution makes clear that further violence by the government will have consequences for our bilateral relationship. Hopefully President Yanukovych will realize that his government will ultimately need to move in the direction its people want to succeed in the future.”

Senator Murphy leaves Sunday to join Senator McCain in Kyiv. Upon his return to the US, Senator McCain will give his first public remarks on the situation in Ukraine at the Atlantic Council. The event will be Thursday at the Council’s headquarters and will be open to the public and press. Click here for details.

Expressing support for the Ukrainian people in light of President Yanukovych’s decision not to sign an Association Agreement with the European Union.

Whereas, according to a poll conducted in November 2013, a majority of the people of Ukraine supported signing an historic trade and political agreement with the European Union;

Whereas a closer association between Ukraine and the European Union has been supported by Ukrainian civil society, business leaders, and politicians across the political spectrum and would bring lasting political, democratic, and economic benefits to the people of Ukraine;

Whereas Ukraine successfully passed much of the legislation required to conform to European Union standards for signing an Association Agreement;

Whereas, on September 22, 2012, and November 18, 2013, the Senate unanimously passed resolutions calling for a demonstrable end to selective justice and expressing its belief that Ukraine’s future lies with stronger ties to Europe, the United States, and others in the community of democracies;

Whereas the experience of countries such as Poland, Lithuania, Latvia, and Estonia provides a positive example of increased economic opportunity, enhanced personal freedom, and good governance. which can also be realized by Ukraine;

Whereas the Government and people of Ukraine have the sovereign right to choose their own foreign policy and economic course, and no other country has the right to determine their political and economic orientation, nor decide which alliances and trade agreements they can join;

Whereas, on November 21, 2013, President Viktor Yanukovych suspended Ukraine’s preparations for signing the Association Agreement one week before a critical European Union Summit in Vilnius, Lithuania;

Whereas the abrupt reversal on the eve of the summit following Russian economic coercion and to protect the narrow interests of some officials and individuals in Ukraine prompted hundreds of thousands of Ukrainians all across the country, especially young people and students, to protest the decision and stand in support of furthering Ukraine’s Euro-Atlantic integration;

Whereas international nonprofit and nongovernmental organizations provide essential care to needy Ukrainians, yet face direct threats and challenges to their existence and administrative and regulatory impediments, including challenges to operating with the tax-exempt status necessary to maximize the use of funds on the ground and threats to the fabric of civil society vital to democracy in Ukraine;

Whereas, on November 30, 2013, at Independence Square in Kyiv, special division police dispersed a peaceful demonstration of students and civil society activists who were calling on President Yanukovych to sign the Association Agreement;

Whereas approximately 35 individuals were detained or arrested, and dozens were hospitalized, some with severe injuries;

Whereas, on December 9, 2013, raids were conducted on three opposition media outlets and the headquarters of one opposition party;

Whereas, on December 11, 2013, Ukrainian authorities conducted an overnight police operation in an attempt to forcefully take control of Independence Square, but were resisted by brave Ukrainians who filled the square and rebuffed the police action;

Whereas all three former Presidents of Ukraine have underscored the need to refrain from violence and the importance of engaging in a dialogue with the opposition; and

Whereas Ukraine faces an impending economic crisis that can only be solved with long term economic reforms: Now, therefore, be it

Resolved, That the Senate—

(1) stands with the people of Ukraine and supports their sovereign right to chart an independent and democratic future for their country;

(2) urges leaders in the United States and the European Union to continue working together actively to support a peaceful and democratic resolution to the current crisis that moves Ukraine toward a future in the Euro-Atlantic community and a long-term solution to Ukraine’s economic crisis;

(3) encourages demonstrators and members of the opposition and civil society in Ukraine to continue avoiding the use of violence and engage in a dialogue of national reconciliation;

(4) urges all political parties to refrain from hate speech or actions of an anti-Semitic or other character which further divide the Ukrainian people when they need to be united;

(5) calls on the Government of Ukraine to refrain from  further use of force or acts of violence against peaceful protestors, and to respect the internationally-recognized human rights of the Ukrainian people, especially the freedoms of speech and assembly;

(6) condemns the decision by Ukrainian authorities to use violence against peaceful demonstrators on November 30, December 1, and December 11, 2013, and calls for those responsible to be swiftly brought to justice and all detained nonviolent demonstrators to be immediately released; and

(7) notes that in the event of further state violence against peaceful protestors, the Administration and Congress should consider whether to apply targeted sanctions, including visa bans and asset freezes, against individuals responsible for ordering or carrying out the violence.