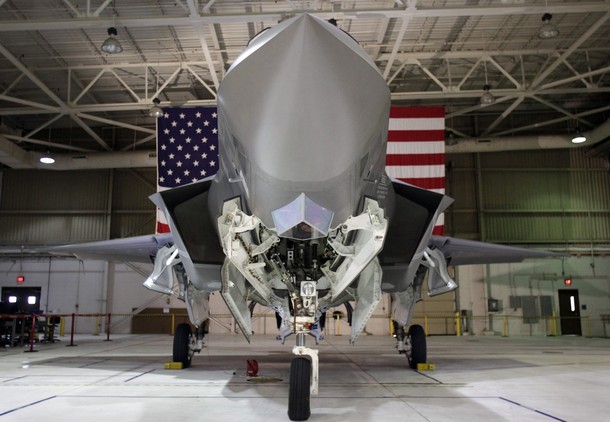 Today is the thirtieth anniversary of the 1982 Argentine invasion of the Falklands about which I will say more later in the week. Last week I wrote a piece about the spiraling out of control costs of the ‘Fifth Generation’ F-35 Lightning II all-singing, all-dancing multirole combat aircraft.

A long supporter of the F-35, I have become profoundly concerned that the ‘balance’ between cost, value, capability, and delivery is now so adverse for the non-American members of the US-led consortium that alternatives must be considered. My focus in the last piece was on F-35B and F-35C, the navalized versions of the aircraft, but my concerns apply across the range. Not surprisingly I received a fairly heavy carpet-bombing from the airmen of several nations supported by their allies in certain defense companies. Therefore, in the interests of fairness I went back and did more research and confirmed a simple truth; the unit cost of each F-35 has now reached astronomical and quite frankly indefensible levels.

The research was further encouraged by comments from two very senior military people whom I respect and like enormously. One is a very senior British ex-naval officer and the other a senior Dutch ex-air force officer. The Royal Navy man expressed real concern to me as to whether some twenty years into the project the short and vertical take-off (STOVL) F-35B will ever work. The Dutch air force officer recalled the time in the late 1990s when he was the Dutch Defense Attaché in Paris and was acquainted with a study into the relative costs of the F-35 compared with the French Dassault Rafale fighter. At the time the Dutch could have bought 85 F-35s for the price of 58 Rafales.

Compare that figure with those of today. The 2012 fly away costs for each Dassault Rafale, Eurofighter Typhoon and F-35 are as follows: Rafale $90.5 million; Eurofighter Typhoon $104 million; F-35A $197 million; F-35B $237.7 million; and F-35C $236.8 million. The F-35 will also incur in-life costs of over $1 trillion over a life-cycle that was conveniently stretched out some time ago from a conventional thirty to a highly suspect fifty years. What technology today enjoys such a lifespan even if one can separate the platform from the systems on board?

To be fair the alternative I suggested for the British and their two new super-carriers was to buy FA-18s off-the-shelf but this option would also involve cost. Indeed, whilst the 2012 fly-away costs for the FA-18 would be some $66.9 million that would be balanced out by the likelihood that the plane would be obsolescent within twenty years.

The causes of this procurement mess are themselves telling and reveal (not for the first time) original cost and performance estimates that never stacked up. Moreover, as a precedent for revolutionary US-led multinational procurement co-operation of a cutting edge ‘big ticket’ aircraft F-35 is a sorry tale. A March 2012 Forbes article by US defense industry insider Loren Thomson offers six US reasons for the F-35 procurement prang which shakes my British/European confidence in the project to the core. First, whilst the F-35 was to be procured on a plan to hold down costs the plan has been simply ignored with the economies of scale central to the plan based on massively inflated numbers. Second, cost estimates for the F-35 were issued that no-one understood. In 2011 the Pentagon gave figures to the US Congress that the politicians could not understand and which actually undersold the aircraft. Third, whilst Lockheed Martin, F-35’s prime contractor, has been repeatedly blamed by the US Government for cost increases, the bulk of such cost increases have been caused by the US Government. Specifically, Washington has changed the way it calculates support costs (whatever that means) and then blamed Lockheed Martin. Fourth, F-35 costs were never put into a meaningful competitor context, such as a detailed cost breakdown of alternatives. Fifth, the long-term consequences of delaying the F-35 program have never been spelt out, nor indeed the impact of the F-35s rising costs on other key defense programs. This is particularly important for the non-US members of the consortium. Sixth, the US has routinely sent the wrong signals to domestic and foreign audiences about Washington’s commitment to the F-35. Pentagon insiders attack the project on an almost daily basis.

Four things come out of Thomson’s study. First, the US has little understanding of what multinational procurement co-operation really means. Second, this is what happens when project engineers and their military counterparts operate beyond proper management. Third, what oversight has been forthcoming from Washington has too often come in the form of competing requirements from different services. Fourth, there is always a price to be paid by partner taxpayers for investment without influence. Indeed, this is a mess made almost entirely in America. Thompson offers a stark warning. F-35 “…is the story of what happens to major technology programs in a balkanized, distracted political system when there is no danger to push them forward. Bureaucratic and personal agendas fill the fill the vacuum once occupied by the threat, and so programs seldom stay on track”.

Now, as a European taxpayer I am still prepared to fund this aircraft if I can be convinced that it will give European forces the tools to do their respective jobs at reasonable cost and risk over the fifty years claimed. However, that is not at all clear from either the airmen or the defense-industry people telling me I am wrong. Indeed, I fear I am being sold a pup. So, just please tell what am I really going to get for my money, when and for how long?
The aim of F-35 was a military super-Ferrari on the cheap. However, as one senior officer put it to me, “we have ended up with a cross between a Ferrari and a Fiat”. That is one very expensive Fiat!