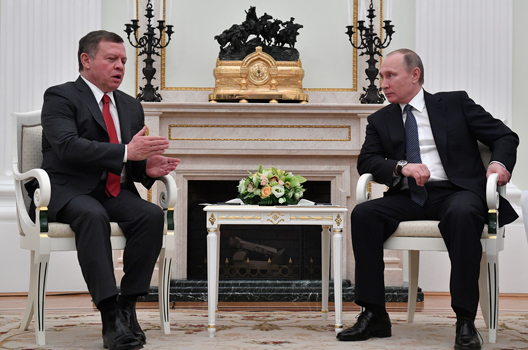 On February 5, Jordan launched airstrikes in southern Syria, directed at the Islamic State of Iraq and al-Sham (ISIS) and Jaysh Khalid bin Al Waleed. Occurring shortly after King Abdullah II’s meetings with Russian President Vladimir Putin in Moscow in late January and with US President Donald Trump in Washington at the beginning of February, Jordan’s stepped-up action in Syria underscores Amman’s continued pivot toward Russia and commitment to continuing coordination with Moscow in Syria. At the same time, the Hashemite kingdom is signaling to the Trump administration that it will not permit terrorists from Syria to enter Jordan. This is in line with Turkey’s announcement that it is ready to set up a buffer zone in northern Syria once the battle with ISIS at al-Bab is over.

The Jordanian airstrikes came on the second anniversary of ISIS releasing a video of its militants barbarically burning to death the Jordanian pilot Moaz al-Kasasbeh in a cage. Jordan’s military said its airstrikes were carried out “in memory of our martyrs who have fallen in our war against terrorism.”

Abdullah went to Moscow and Washington to coordinate with both sides the buffer zone areas in southern parts of Syria close to Jordan’s borders to accommodate refugees and ensure border security. This was done in preparation for the military strike on the cities of Raqqa in Syria and Mosul in Iraq, which is likely to force many ISIS fighters and their families to flee south toward Jordan. Additionally, the buffer zones in northern and southern Syria, insisted upon by the United States, will lead to further pressure on the southern front, as the main battle will be in the southern Syrian city of Daraa, situated near Jordan and Israel.

Jordanian officials have started to accept that Syrian President Bashar al-Assad could remain in power for the foreseeable future. Consequently, Abdullah went to Moscow to obtain assurances that Jordan will have a “say” in running the buffer zones in southern Syria. This is also why Jordan participated as an observer in the Syria peace talks in Astana in January.

At the political and military levels, the Jordanian king’s visits to both Russia and the United States were successful due to both Moscow and Washington’s recognition of the pivotal role the Hashemite kingdom has to play in the international anti-terrorism coalition and Jordan’s fears of infiltration by militant extremists if Russia carries out more airstrikes on targets in southern Syria.

Amman is concerned not only about the threat posed by ISIS, but also the affiliation of Free Syrian Army (FSA) members with the Jabhat Fateh al-Sham-led Tahrir Al Sham alliance.

The Jordanian media has voiced alarm over Jabhat Fateh al-Sham, a jihadist group formerly known as Nusra Front that many in the Hashemite kingdom perceive as merely a replica of ISIS. Given that Jordan and Syria share a 235-mile border, authorities in Amman have legitimate concerns about ISIS and Jabhat Fateh al-Sham militants using territory in southern Syria as a springboard for terrorist activity against the Jordanian state and civilian population. By launching airstrikes against targets in southern Syria, Amman is determined to prevent such violent extremists from coming within close proximity to Jordan.

Further, in two of the major refugee camps along the Jordanian-Syrian border—al-Rukban and Hadalat—there are 100,000 refugees. As underscored by the ISIS attack in al-Rukban last July, the terrorist group has infiltrated these camps with their attention turned to the Hashemite kingdom, which ISIS considers “worse than the Americans because this is an Arab and Muslim country that has declared war against it.”

Economic factors are also in play. The closure of the Jordanian-Syrian border has cost the Hashemite kingdom immensely in terms of trade. Jordanian officials are seeking to work with both Moscow and Washington, as well as the Assad regime, to reopen the border. If this border reopens, the Jordanians could once again begin reaping the economic benefits of trade between nations in the Levant as well as the wealthy Gulf Cooperation Council states. Such an opportunity could help Jordan bring its budget deficit under control by bringing in greater revenue after years of its debt-to-GDP ratio increasing significantly.

This year, Jordan will have to make difficult decisions regarding the war in Syria. A continuation of the conflict will offer more extremists more fertile ground to shape the Levant’s security landscape and result in even more Syrian refugees flowing into Jordan. At the same time, if Assad’s forces manage to reconquer more territory and eventually take back the entire country, or at least most of it, it is doubtful that the refugees in Jordan, who are predominantly Sunni, will feel safe returning to Syria for fear of a vengeful regime punishing them for fleeing their home country.

In any event, Amman has taken stock of Russia’s growing commitment and investment in the Syrian crisis and has decided to further enhance its cooperation with the Kremlin, which began in October 2015. Yet Jordan, a longtime US ally, is also determined to work closely with the Trump administration, especially as the new US president advocates “safe zones” in Syria, which will inevitably bear major implications for the future of the Hashemite kingdom’s security.

Shehab al-Makahleh (Sam Mak) is a senior advisor at Gulf State Analytics with experience as a political adviser in the United Arab Emirates.