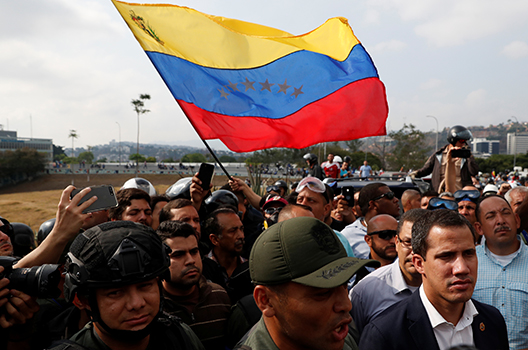 At dawn in Caracas on April 30, security personnel carried out two bold moves in support of the interim government—and in defiance of Nicolás Maduro’s regime. These developments mark the best chance yet for Venezuelans to begin the next wave of reclaiming democracy and ending years of suffering.

At La Carlota Air Base, Venezuela’s interim president, Juan Guaidó, flanked by members of the armed forces, announced he was “beginning the final phase of Operation Freedom.” Soldiers at the air base and in the streets of Caracas that have pledged allegiance to the interim government wore blue arm bands. Move two in defiance of Maduro.

Massive streets protests planned for May 1 are already underway in Venezuela. But this is a very tense situation without much clarity on how far support for the interim government has spread across security forces.

Maduro placed Cuban intelligence services across military units precisely to squash any type of movement against his regime. Will the Cuban intelligence and those loyal to Maduro win the day? Or will the growing number of soldiers whose families continue to suffer due to the humanitarian crisis engineered by Maduro’s failed policies win out? As speakers said at the Atlantic Council on April 25, the military has the opportunity to get on the right side of history and support the interim government. If they do, they can be part of a future, inclusive Venezuela.

Either way, the actions taken on April 30 will hopefully produce swift democratic change. But that’s not the history of such actions in Venezuela. The United States and the more than fifty countries who have recognized Guaidó must also be prepared for the long game and ensuring that the interim government has every resource at its disposal to be successful. It may take time, but this is the best chance yet for a restoration of democracy and an end to the suffering of the Venezuelan people.

Democracy is not just in the hands of politicians and the military; all of society must be involved to capture the moment and help April 30 actually become the historic day it can be to finally oust Maduro.  The world as well must watch closely and be prepared to categorically reject any likely violence and repression perpetuated by the Maduro regime.

Jason Marczak is the director of the Atlantic Council’s Adrienne Arsht Latin America Center. Follow him on Twitter @jmarczak.

Image: Venezuelan opposition leader Juan Guaido, who many nations have recognised as the country's rightful interim ruler, stands next to soldiers as they speak to the media near the Generalisimo Francisco de Miranda Airbase "La Carlota" in Caracas, Venezuela April 30, 2019. (REUTERS/Carlos Garcia Rawlins)