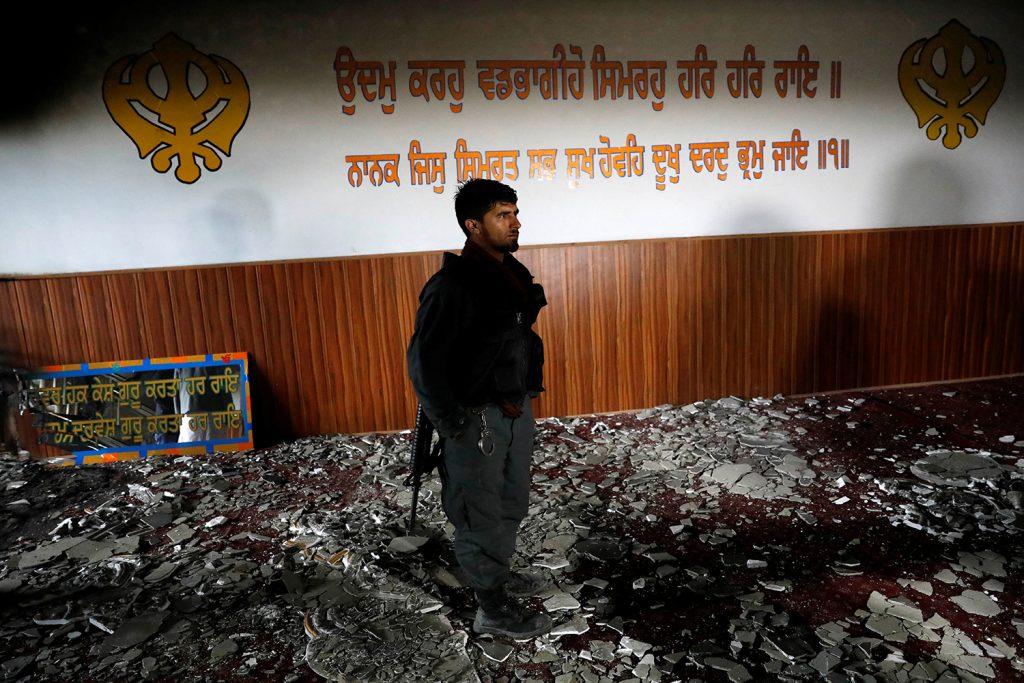 Two days after militants stormed the Sikh Gurdwara Har Rai Sahib in Kabul on March 25, killing twenty-five devotees, the Islamic State’s (IS) media group Amaq news agency released a video clip of a man dressed in military camouflage in the back of a moving car, seeking blessings in Hindi with a heavy Malyalee accent. “My brothers and sisters I’m going to accomplish a mission for you all, Inshallah. I’m nearing it soon and you all will hear the good news…about the humiliation of the Kuffars… Inshallah very soon.”  In its weekly magazine Al Naba, the terror group identified him as Abu Khalid al-Hindi, who “planted explosives in the Sikh prayer area before opening fire, killing fifty Sikhs, Hindus, and Afghan security personnel.”

The Islamic State of Khorasan Province (ISKP), IS’s affiliate in Afghanistan, has previously attacked the country’s minority Sikh community. However, this is the first instance when it has used an Indian national to spread terror on the handful of remaining Sikh residents in Kabul. The symbolism of an Indian fighter indiscriminately gunning down worshippers is not lost on India, which promises to provide citizenship to the religiously-persecuted Afghan Sikh community. The attack has brought home a haunting realization that Indian nationals who joined jihadist groups like al-Qaeda and the IS in Syria and Afghanistan pose a tremendous security threat and are likely to be used to attack Indian interests at home and abroad.

Investigation agencies have confirmed that al-Hindi was the nom-de-guerre of twenty-nine-year old Muhammad Muhsin from Kasaragod in the southern Indian state of Kerala. They also suspect involvement of another young individual, Sajid Kuthirummal, in the attack. Both are among the 100 odd people from the state that are believed to have travelled in batches between 2016 and 2018 to the eastern frontier of Afghanistan claiming to be simply looking to live an Islamic life in the IS-declared Caliphate. Recently released video testimonies of women from the group who surrendered to Afghan authorities in 2019 reveal, however, that their men died fighting Afghan security forces.

Dr. Adil Rasheed, a leading scholar on radicalization and extremism at the New Delhi based Manohar Parrikar Institute for Defence Studies & Analyses, pointed out that earlier perception among some strategic thinkers that these individuals who migrated did so for purely puritanical reasons and therefore did not pose a threat was a mistake. “The Islamic State is not a country, it is a terrorist organisation, and anyone travelling to the Caliphate is not just going to offer namaz and serve Islam, they are by default getting involved in militant activities.” This also goes against the narrative built by intelligence agencies to dissuade people from joining the group, which suggests that Indian fighters were considered inferior to Arabs and given menial tasks, whereas reality suggests their training focused on suicide bombing and frontline combat.

Afghanistan has been a breeding ground for Indian nationals seeking jihad and for members of the home-grown terror group, the Indian Mujahideen (IM), long before the IS announced the establishment of the ISKP in December 2015. Many trained with al-Qaeda and later traveled to Syria to join IS. Among them was Anwar Hussain, a native of Bhatkal in Karnataka and IM member, who became the first known IM casualty in Afghanistan in 2014. IS later appropriated his death and released a propaganda video featuring him to appeal to Indian youth to undertake global jihad. In the following years, others from Kerala’s large group of migrants such as Rashid Abdullah, Shajeer Mangalassery, and eight others were killed in military operations and US airstrikes in Afghanistan.

There is a lack of authoritative data on the exact number of overseas Indian fighters—unofficial estimates range between 100  and 200—as well as how many have been killed and their present whereabouts. As such, a large number remain untraceable. Indian agencies are thus caught off guard when attacks like the Kabul Gurudwara are conducted by Indian nationals. UN reports and media investigations reveal Indian fighters and their families languishing in Afghanistan and Syria, though there is lack of clarity on a plan to repatriate or extradite them.

Threats and challenges to Indian interests in Afghanistan

The ISKP claimed that the attack on Kabul Gurudwara was in response to the “crimes committed by Hindus and Sikhs against Muslims in Kashmir and parts of India.” The mention of Sikhs appears forced and unusual as it belittles Sikh-Kashmiri solidarity as well as with Muslims in India. It does appear aimed at recent decisions by the Modi government, decried as anti-Muslim and heavily criticized by Pakistan. The August 2019 abrogation of Article 370 which safeguarded Kashmir’s political autonomy, a subsequent communications blackout, the Citizenship Amendment Act (CAA) in December that seeks to provide citizenship to Hindus, Sikhs, Jains, and Christians refugees from neighboring countries, and the resulting violence against protesting Muslims, have become opportunistic fodder for jihadist groups to direct propaganda towards Indian Muslims, and expand their reach in Kashmir and in the region.

IS was quick to latch on to violent clashes in Delhi and related CAA protests, appropriating the disturbing imagery of mobs assaulting Muslims in its propaganda material. It called on Indian Muslims to rise up and undertake jihad. Unlike the main IS in Syria and Iraq, the ISKP has multiple factions, some in contact with the core leadership in Levant, others tied loosely to defectors from a mélange of jihadist groups like the Taliban, Tehreek-e-Taliban Pakistan (TTP), and Islamic Movement of Uzbekistan, operating in the Afghanistan-Pakistan borderlands. They then split loyalties per availability of money and resources. Both Indian and Afghan authorities believe that the IS presence in the region is sustained by Pakistani support. After the recent Kabul attack, Afghan authorities arrested alleged ISKP leader Abdullah Orakzai, also known as Aslam Farooqi, a Pakistani national. The office of National Security Council and Vice President Amrullah Saleh have alluded to the involvement of regional intelligence agencies in IS-Khorasan operations. Kabul has subsequently also turned down Islamabad’s request to hand over Farooqi and insist he be tried on Afghan soil.

India has painstakingly developed its friendship, built a reputation of goodwill, and earned gratitude from the Afghan people, through its development aid programs over the last two decades. Pakistan considers India’s influence in Afghanistan to be a threat in its backyard and has continued military interference in Afghanistan to achieve strategic depth. In the past, India has faced systematic attacks on its development projects, diplomatic missions, and Indian nationals working in Afghanistan. At a time when US forces have negotiated an exit, the reduced security presence of international coalition forces and the potential for a take-over by the Taliban could put India’s geo-strategic interests in jeopardy. The latest Kabul attack underpins the escalating risks of attacks on India’s assets and interests in Afghanistan, but the threat now emerges not just from certain factions within the Taliban and Pakistan-sponsored groups, but also from India’s own nationals.

Shweta Desai is an independent researcher and journalist, with interests in terrorism, radicalization, violent extremism and conflicts.

India’s adoption of facial recognition technology could have serious ramifications

The application of facial recognition technologies in India would almost certainly aid the country’s stretched law enforcement units and may prove useful in future incidents of public rioting or unrest. Given the state of current technologies, however, observers and government officials in India need to critically examine the reliability of this new platform and its potential to wrongfully infringe on the rights of innocent individuals.

By Rudabeh Shahid and Champa Patel

Image: An Afghan policeman inspects inside a Sikh religious complex after an attack in Kabul, Afghanistan March 25, 2020.REUTERS/Mohammad Ismail