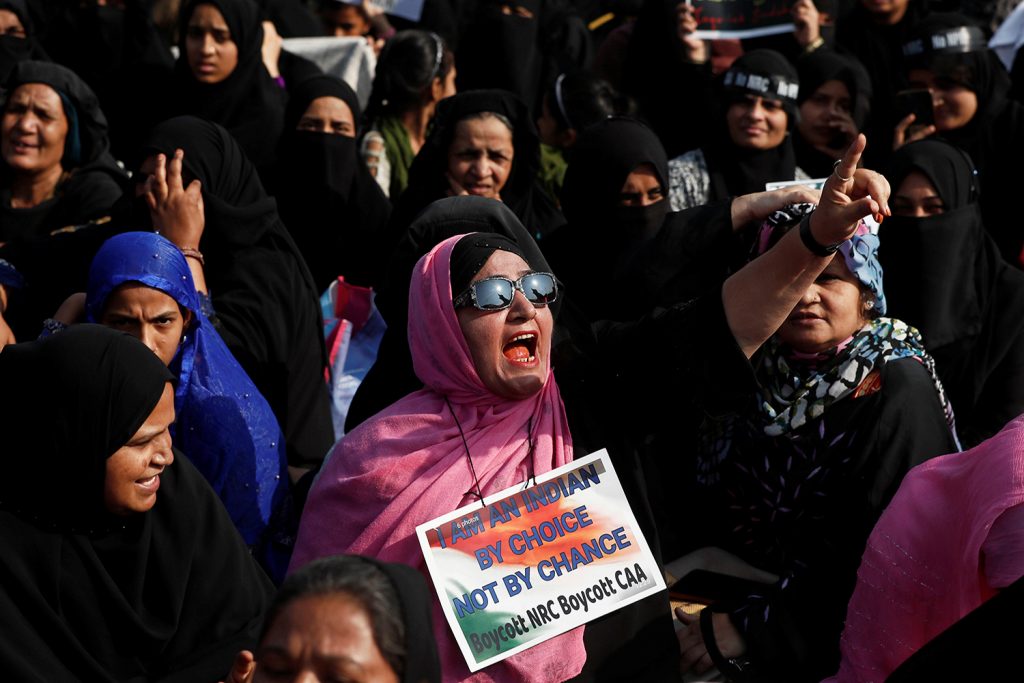 Indian Prime Minister Narendra Modi’s canceled visit to Dhaka to attend the birth centenary celebrations of Sheikh Mujibur Rahman, the founding father of Bangladesh, was due to happen at a time when the scars of late-February’s violence in Delhi are still fresh. Bangladeshi civil society has been hugely critical of the violence, in which over fifty people, mostly Muslims, lost their lives. Both Islamist and leftist organizations held protests over Modi’s upcoming visit to Dhaka, while famous intellectuals penned a joint statement condemning the violence and expressing concerns about the symbolism of Modi’s visit. At a time when the world’s attention is focused on the ravages of COVID-19, the controversy in Bangladesh over the visit of an Indian prime minister is an important reminder of the other dangers threatening social stability in South Asia.

Last December, the Indian parliament passed the Citizenship Amendment Act (CAA) which gives non-Muslim minorities originally from neighboring countries a faster path to citizenship. There were also talks of the government introducing a registry of citizenship across the country, widely known as National Register of Citizenship (NRC). The NRC process has already taken place in the northeastern state of Assam, leaving hundreds and thousands of people at risk of statelessness. The CAA, combined with the proposed nationwide NRC, risks disenfranchising Muslims across the country as it provides a pathway to citizenship for non-Muslims but has no remedies for Muslims caught up in NRC processes.

In August 2019, the NRC was published in the north-eastern state of Assam. This process led to the disenfranchisement of about two million people. Soon after, there were fears of how this exercise might affect the rest of India, as India’s ruling party, the BJP (Bharatiya Janata Party), announced that it would implement such a registry throughout the country.

A few months later, in mid-December, the Indian Parliament passed the Citizenship Amendment Bill (now CAA or Citizenship Amendment Act) which essentially introduced a religion-based clause to existing Indian citizenship laws, by giving minorities from neighboring Muslim majority countries—Afghanistan, Bangladesh, and Pakistan—a faster path to citizenship. However it explicitly excludes Muslims. In part this measure was intended to remedy the unanticipated inclusion of many Bengali Hindus and other minority faiths in the NRC, thereby providing them a path to citizenship. But such a move is clearly discriminatory against Muslims and counter to Article 15 of the Indian Constitution, which prohibits discrimination on the basis of religion, caste, race, sex, and place of birth. Since this development, there have been protests across India where, in many instances, protesters have faced police brutality, with violence perpetrated even inside university campuses. Most recently, during the last week of February, there were episodes of anti-Muslim violence in Delhi that a leading scholar of Hindu-Muslim violence in India described as a ‘mini-pogrom.’

Critics of the current administration see these measures as a violation of the secular foundations of the Indian constitution and a means to weaponize citizenship. There is a historical context that has made citizenship a contested and controversial process in India. After partition in 1947, people in the territory of India were essentially eligible for birthright citizenship. Hindu refugees coming in from Pakistan, however, often had to deal with citizenship challenges. Almost forty years later, in 1986, the Indian Parliament passed a law in which to be eligible for citizenship, at least one parent had to be Indian. Nevertheless it was during the early 2000s in the BJP’s first term in office that the notion of classifying migrants and refugees based on religion was set in motion.

The north-eastern state of Assam has been party to almost three-decades of hostility and resentment against communities deemed to be “Bangladeshi” and “foreign” by the state. Assam’s anti-migrant sentiment can be traced back to India’s colonial history when Assam’s demographic structure changed. To expand agricultural production, Bengali Muslim peasants were brought into Assam, while Bengali Hindus settled in the region to take up administrative posts. In 1983, hundreds of Bengalis, mainly Muslims, were killed by Assamese nationalists in the Nellie massacre. In 1985, the then Prime Minister Rajiv Gandhi signed an accord with the Assamese nationalists to create a register of citizenship—popularly known as the NRC—to bring an end to the violence and signal a way forward. According to this register, anyone who entered India after midnight of March 24, 1971 (the day before Bangladesh declared its independence) would be deemed a foreigner. However, no real advances were made on the registry until the BJP assumed office in the state in 2016.

Prior to the BJP assuming office and the progression of the NRC, however, there had long been citizenship discrimination. Within the state, there was the creation of a special category of people known as “D” or “Doubtful” voters whose citizenship status was cast into question. The subsequent NRC process has continued this process of marginalizing some of the most vulnerable in Assam’s society. These are primarily Bengali Muslims who reside in the riverine areas where the literacy rate is 19 percent and birth registration is minimal. Moreover, the flaws of the process have also not spared individuals such as the army officer Mohammad Sanaullah, who is a Bengali Muslim and has served his country, and was declared a foreigner in the “foreigner tribunals.”

Interestingly, there have also been unintended consequences for the central government. When the final draft of the NRC was published in 2019, the ruling BJP party were unhappy that there were a substantial number of Hindus on the final list of 1.9 million people. This has put the BJP in tension with local Assamese leaders, who are hostile to anyone they deem “Bangladeshi,” irrespective of their religion. The individuals who have been declared non-citizens are at risk of ending up in detention centers that are being built in Assam. This denaturalization process of the Bengali Muslims echoes some of the dynamics of how the Rohingyas of Myanmar were gradually stripped of their citizenship rights and ended up as a stateless community.

As stated earlier, the CAA and the NRC, while different in origin, have become linked in the national imagination to a process of denaturalization. When the parliamentary debate on the Citizenship Amendment Bill (CAB, which later passed in parliament and became the CAA) took place, many Indian political parties voted in unexpected ways. For example, a Hindu-nationalist party such as the Shiv Sena voted against the bill as they wanted persecuted migrants to be eligible for citizenship rights but deprived of voting rights for many years. On the other hand, a Tamil nationalist party the AIADMK was not pleased with the exclusion of Sri Lankan Tamils in the drafted bill yet voted in its favor. Moreover, the originally drafted CAB of 2016 looked different from the one that passed in 2019. To ally the fear of many northeastern states of seeing large migration of Bengali Hindus, and in order to get their political parties on board, the BJP modified the original proposed bill exempting states where the Inner Line Permit (ILP) or the Sixth Schedule (which grants a degree of autonomy to tribal councils) operates.

After the passing of CAB, some state governments—such as West Bengal—declared that they would not implement the NRC. However, this may impact the rollout of the NRC because although district collectors at state level are normally responsible for collecting documentation on citizenship, in the case of the NRC it is the central government officials who are in charge of overseeing their collection. Furthermore, since the Indian federal system has a provision of implementing President’s Rule, if states do not cooperate with the ruling government at the center, there can be threats of suspending the state’s government and imposing the rule of the center.

Unfortunately for Western countries, particularly the United States, relations with India are seen mainly through the prism of regional geopolitics, security, and trade. The United States Commission on International Religious Freedom (USCIRF) had put forward the idea of imposing sanctions against Home Minister Amit Shah and the top BJP leadership if the CAB passes. However, such measures have not yet been applied. Recently the ministry for external affairs of India hit back at the United Nations High Commission for Refugees (UNHCR) for seeking to intervene in the hearings of the Supreme Court on the CAA. The Indian government keeps on insisting that both the NRC and the CAA are “internal matters” of the country despite the cross-border implications of the processes.

The secular foundations of India, the world’s largest democracy, are currently under great stress. There is a need to ensure the constitutional foundations of India are defended and protected and that any measures taken are compliant with international norms and values. India is at a critical point. When representatives of the ruling party foster hostility and violence, it remains to be seen how they can then also solve these very same issues. But, as we have seen with the Rohingya, mass disenfranchisement is never a long-term solution and these issues do not go away.

Editor’s Note: Many ideas in the piece are informed by discussions during the NRC-CAA Workshop held on February 28, 2020, which was organized by the Rethinking Civil Society Project, Department of Politics, University of York.

Dr. Rudabeh Shahid is a nonresident senior fellow at the South Asia Center and a postdoctoral research fellow at the “Rethinking Civil Society” Project in the Department of Politics, University of York, UK.

Recent demonstrations in Bangladesh against Modi’s visit speak volumes, literally and metaphorically. Instead of dismissing them as a conspiracy, both countries will be better served if their policymakers listen and take this opportunity to reassess their relationship and the domestic political environment in Bangladesh.

Image: A woman shouts slogans during a protest against a new citizenship law in Mumbai, India February 15, 2020. REUTERS/Francis Mascarenhas