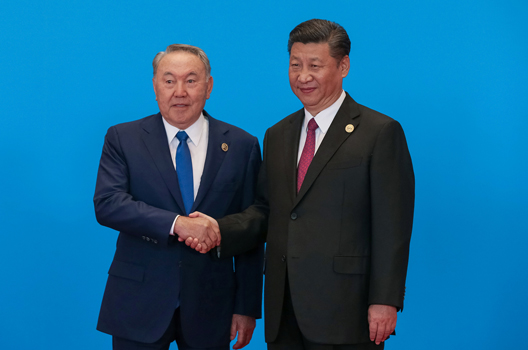 Chinese President Xi Jinping’s signature Belt and Road Initiative (BRI, formerly One Belt, One Road) is an economic integration project that will allow the often-overlooked Kazakhstan to capitalize on its unique geographic location to leverage geopolitical benefits from the initiative.

Simply put, BRI functions as a network of transportation infrastructure connecting Chinese investments—ranging from resource mining to investments in communications and manufacturing sectors—throughout Eurasia, the Middle East, and Africa directly to the source of capital. Unlike its fourteenth-century ancestor, BRI is comprised of two elements: the land-based belt and a maritime road. The sixty-plus BRI nations make up roughly 60 percent of the world’s population and over one-third of its economic output.

On May 14-15, Beijing celebrated BRI with twenty-nine heads of state and 1,200 participants representing 130 countries at the Belt and Road Forum for International Cooperation (BRF), China’s largest diplomatic event of 2017.

Kazakhstan, which has a legacy of supporting similar integration projects, is an early adopter of BRI. In fact, Nursultan Nazarbayev, who has served as president of Kazakhstan since 1991, was pegged as an integrationist as early as the formation of the Commonwealth of Independent States—the successor, but now largely defunct, organization of the Soviet Union—in 1991. Nazarbayev called for revitalizing Central Asia through “Eurasian integration” projects, such as the Eurasian Union, as early as 1994, nearly twenty years before Xi first announced the BRI project in 2013. Unfortunately for Astana, Kazakhstan has continuously lacked the resources, appeal, and sense of commitment to be the driving force for such projects. Xi, on the other hand, has agency to reallocate the wealth and the power to recruit the buy-in that will bring BRI to life.

While impressive, China’s motives to support the project to the tune of an estimated $4 trillion are frequently called into question. Though Xi touts the project as a win-win for global South-South cooperation, skeptics believe China’s altruism is wholly self-serving. For example, India chose to skip the forum over sovereignty concerns and is wary of China’s intentions to gain greater influence as a regional power. Even so, for many BRI nations, signing up with Xi is the fastest means to satisfy demand for infrastructure, especially for desperate-to-modernize, yet capital-poor, Central Asia.

Kazakhstan, a land-locked Central Asian nation, has long relied on its strategic location to stay relevant on the global stage. From aiding NATO’s resupply routes for the International Security Assistance Force (ISAF) in Afghanistan to hosting the world’s first and largest space launch facility at Baikonur Cosmodrome (from where, since the retirement of the US space shuttle program in 2011, all NASA astronauts have been launched into space), Kazakhstan continues to be a central, yet underappreciated, component in the global transportation framework.

The central station for BRI’s land route sits 535 kilometers from the continental pole of inaccessibility, the furthest point on Earth from the sea, near the China-Kazakhstan border. Since 2011, the Chinese city of Khorgos near the border with Kazakhstan has resumed its historic role as China’s gateway to the west along the ancient Silk Road.

Unlike other BRI nations, Kazakhstan is strategically positioned to be China’s portal to Europe—from their shared border at Khorgos to Kazakhstan’s western Caspian shores in the energy epicenter of Aktau. Resting on the western shore of the Caspian Sea, Aktau began as a uranium mining site during the Soviet era and today is the core of Kazakhstan’s oil industry. A series of pipelines, railways, and freights will not only link Aktau to Khorgos, but also to Russia in the north, Iran to the south, and Azerbaijan, Turkey, and Europe across the Caspian to the west. As Aktau modernizes, adopting containerization to further reduce the cost to ship through the port, BRI countries will have the option to completely circumvent Russia—and the Kremlin’s penchant for reactionary economic sanctions against those on its hit list.

Still, all this promise comes with significant challenges, both for Kazakhstan and for China. The reduced global demand for oil has seen oil prices plummet, resulting in less revenue for Astana to fund BRI and other modernization projects. In addition, many BRI projects have been criticized for their scale, with projects built to exorbitant capacities, well above the available demand and supply.

Yet, despite these challenges, participating in BRI is a perfect marriage of Nazarbayev and Xi’s integrationist ambitions. From the Khorgos Eastern Gate to Aktau’s Western Gate, Kazakhstan has situated itself as the hub from which the spokes of BRI branch out to the rest of the world. The presidents’ shared vision was even reflected in the foreign delegations’ group photo at BRF, where Nazarbayev stood mere inches away from Xi, second only to Indonesian President Joko Widodo and Russian President Vladimir Putin.

Despite the good fortune revitalizing the Silk Road could bring to the Sino-Kazakh partnership, it remains to be seen how the United States factors into the complex BRI web. The Atlantic Council’s Brent Scowcroft Center, in its new Foresight, Strategy, and Risks Initiative, is examining the implications of various US strategies in a new Atlantic Council Strategy Paper by Gal Luft, to be published later this year.

In the context of this burgeoning initiative, Washington finds itself in between a rock and a hard place, faced with four less-than-desirable choices. The United States could play spoiler, foiling a project that holds the potential to boost nations into the twenty-first century in order to contain Chinese ambitions; participate and risk inflaming Indo-Sino tensions and emboldening Chinese aggression throughout Southeast Asia and in the South China Sea; find an unlikely middle ground of engagement; or simply wait and see if BRI succeeds or collapses under its own weight.

Alexandra Di Cocco is a program assistant in the Foresight, Strategy, and Risks Initiative at the Atlantic Council’s Brent Scowcroft Center on International Security. You can follow her on Twitter @A_DiCocco