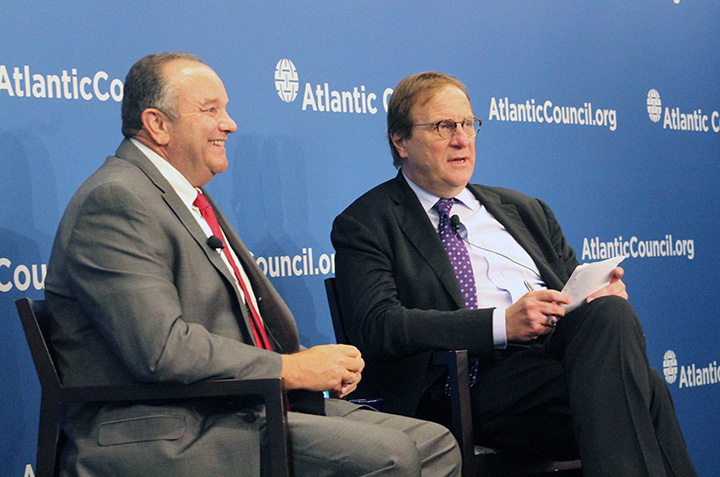 It is important not to close the door to Russia, which is led by a man whose number one goal is to create rifts within NATO and the European Union, former NATO Supreme Allied Commander for Europe, Gen. Philip M. Breedlove, said at the Atlantic Council on June 8.

“We have to, in a very determined way, begin to establish quality communications with the Russians. If we wait for it to fall into our lap we are going to fail and this risks more problematic developments,” Breedlove said.

He advocated establishing a line of communications with Russia. “It may be frustrated and frustrating in the beginning, but we really, I don’t think, have any choice in this matter,” he said.

Breedlove spoke in a conversation moderated by Atlantic Council President and CEO Frederick Kempe at an event on “The Future of NATO Enlargement and New Frontiers in European Security.”

Noting the structural and attitudinal changes within NATO, Breedlove said: “The tough part though is to finish what we started and in finishing what we have started to not close a door to whatever it is we are going to do with Russia in the future.”

Breedlove suggested that path could be found by finishing the work started at NATO’s Wales Summit in 2014. “Russia does understand power and strength and unity,” he said. “Those are good ingredients for beginning our path to…whatever it is that we are going to establish with Russia in the future.” NATO will hold its next summit in Warsaw in July.

Breedlove’s call for keeping the door open with Russia follows more direct advice from former US Defense Secretary Chuck Hagel, a distinguished statesman at the Atlantic Council, who said on May 10 that the next US president should prioritize engagement with Russian President Vladimir Putin.

The Pentagon has quadrupled its  budget for European defense in 2017 in light of Russian threats and NATO plans to deploy four combat battalions in Poland and the three Baltic States: Estonia, Latvia, and Lithuania. US military officials in May inaugurated a missile interceptor site in Romania, which will be part of a larger missile defense shield.

NATO this week started a series of major military exercises—known collectively as Anakonda-2016—in Poland. Alongside its own allies, US troops are participating in the exercises. Breedlove said the exercises are not a NATO exercise, but rather a “Polish multinational exercise.” NATO is conducting a separate exercise—BALTOPS—in the Baltic Sea.

“The alliance took a decision not to connect the two to make it hopefully less offensive to the Russians,” said Breedlove.

Russia has responded to NATO’s focus on its eastern flank with a pledge to deploy three divisions –encompassing 30,000 troops—to its western and southern flanks by the end of this year.

Alexander Richard Shirreff, a retired British General who served as deputy supreme allied commander for Europe from 2011 to 2014, predicts that Russia, in an attempt to avoid NATO encirclement, will seize territory in eastern Ukraine, create a land corridor to the Crimea Peninsula that it annexed in March of 2014, and invade the Baltic States.

Retired US Adm. James Stavridis, a former supreme allied commander for Europe, in a foreword to Shirreff’s new book, writes that Putin has put Russia on a dangerous course that, if allowed to continue, “may lead inexorably to a clash with NATO” that “could so easily go nuclear.”

Breedlove said the fact that the Russians “speak about, write about, and train to using tactical nukes as a logical and understood extension of conventional war is problematic.”

The goal of this strategy is to “coerce you, to put you in the frame of mind that you have no other choice except to capitulate or you will end up in this ugly place,” he said, adding that a response should include off ramps aimed at avoided escalation.

“How do you build a war plan that responds to that line of logic that demonstrates power, demonstrates capability, but provides off ramps so that both nations, but certainly the one that espouses using tactical nukes, sees an opportunity to in some way meet some of their objectives but begin to decelerate,” said Breedlove. “That is an art and not a science.”

The European Union imposed sanctions on Russia in response to the annexation of Crimea and Russian support for separatists in eastern Ukraine. Those sanctions come up for renewal at the end of June.

The EU was Russia’s biggest trading partner before the sanctions were imposed and frustration is building within Europe over keeping the sanctions in place. The French senate, in a nonbinding vote on June 8, voted overwhelmingly to partially lift the sanctions. Sanctions can only be re-imposed with unanimous consent of the twenty-eight member European bloc.

Putin’s priority is to divide the EU and NATO, said Breedlove. “His number one goal is really to crack either the EU or to crack NATO, because if he does that he gets everything else he wants,” he said, “but what we have shown him since Wales is more unity.”

A starting point for Putin to create fissures in the EU and NATO would be a “full-court press to try to break the sanctions because that is then the first crack that becomes the fissure that becomes the problem,” he said, adding that the EU should expect pressure on issues that would show disunity within the bloc.

Image: “We have to, in a very determined way, begin to establish quality communications with the Russians,” former NATO Supreme Allied Commander for Europe, Gen. Philip M. Breedlove (left), said at the Atlantic Council on June 8. Frederick Kempe (right), president and CEO of the Atlantic Council, moderated the discussion. (Atlantic Council/Kane Borders)