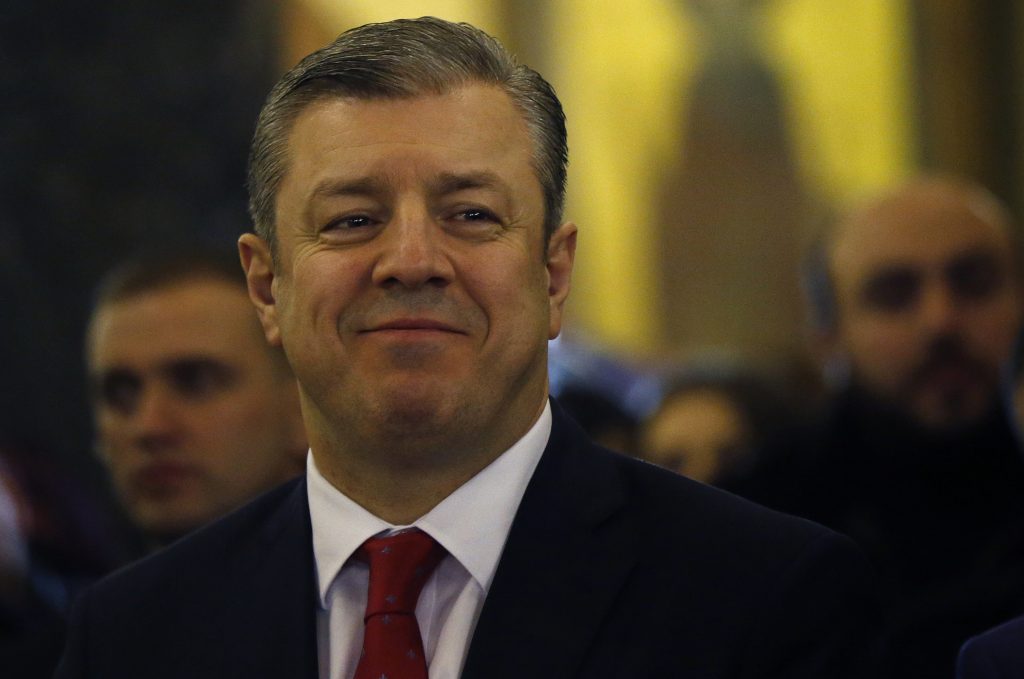 Georgian Prime Minister Giorgi Kvirikashvili was catapulted to office in December of 2015 after the abrupt resignation of his predecessor, Irakli Garibashvili.

In his previous role as Foreign Minister, Kvirikashvili led significant initiatives to advance Georgia’s Euro-Atlantic and European integration efforts. That will continue. Kvirikashvili says realizing Georgia’s dream of EU and NATO membership will be a top priority for his administration.

“We are not looking for shortcuts and do not expect immediate progress in the integration process, but it is of the utmost importance to demonstrate to our people that the process is not stalled and that it is delivering tangible results,” Kvirikashvili said.

Giorgi Kvirikashvili discussed why Georgia qualifies to be part of NATO; the former Soviet bloc nation’s relations with Russia; Tbilisi’s expectations from its Western partners, particularly the United States; and his plans to fix Georgia’s economy, in an exclusive and wide-ranging e-mail interview with the New Atlanticist’s Ashish Kumar Sen. Here are excerpts from our interview.

Q: Are you more hopeful following NATO’s invitation to Montenegro that Georgia will receive a clear roadmap, if not a Membership Action Plan (MAP), to join the Alliance at the Warsaw summit in July?

Kvirikashvili: First of all, I would like to underline that we welcome Montenegro’s invitation to join the Alliance. This decision reaffirms NATO’s commitment to the open door policy.

NATO’s statement on the open door policy adopted at the December 2015 ministerial was of particular importance for Georgia as it confirmed that Georgia has all the practical tools necessary to prepare for Alliance membership. We are determined to utilize those practical tools to the fullest possible extent in order to support a political decision on Georgia’s NATO membership.

Today, Georgia’s cooperation with the Alliance is stronger than ever. We are successfully implementing the Substantial NATO-Georgia Package adopted at the Wales Summit in 2014. The largest project under the Package—a Joint Training and Evaluation Center—was inaugurated in August 2015. In parallel, the NATO core team has been deployed to Georgia and is embedded at the Ministry of Defense. In 2015, Agile Spirit, a large-scale NATO-Georgia military exercise, was carried out.

Georgia is the second-largest troop contributor to the NATO Resolute Support Mission in Afghanistan. At the same time, Georgia is providing a company size unit to NATO’s Rapid Response Force for 2015-2017. Through its participation in NATO missions, Georgia has established itself as a security provider and has proved its ability to contribute to common security.

At this point it is too early to tell the exact outcome of the NATO Summit in Warsaw. We are confident that NATO’s decision will be based on the performance of Georgia, register progress on Georgia’s integration path, and bring us closer to our ultimate objective of membership in the Alliance.

Q: What reassurances are you seeking from Georgia’s Western partners, particularly the United States, to keep alive Georgia’s foreign policy priority of Euro-Atlantic integration as well as incentivize Georgia’s commitment to reforms?

Kvirikashvili: European and Euro-Atlantic integration is a firm choice of the people of Georgia and is a matter of broad consensus between major political forces in our country. Georgia’s choice is determined by the universal values of democracy, human rights, rule of law, freedom, and peace.

The primary objective of the fundamental institutional reforms carried out in Georgia is to modernize the country and put it irreversibly on the path of democracy and prosperity. European and Euro-Atlantic integration is seen by Georgia as an opportunity to achieve these objectives and safeguard them in the future.

Progress in the European and Euro-Atlantic integration process will be a good incentive for the population of Georgia to continue supporting the reforms. We are not looking for shortcuts and do not expect immediate progress in the integration process, but it is of the utmost importance to demonstrate to our people that the process is not stalled and that it is delivering tangible results.

Q: What are Georgia’s priorities in its relationship with the United States?

Kvirikashvili: The United States is an important strategic ally of Georgia and the relationship between our countries at all levels of government has never been stronger. On a personal level, I want to be a bridge between our two countries. I have great memories of my time as a graduate student at the University of Illinois. It is a nice coincidence that President Obama, US Ambassador to Georgia, Ian Kelly, and I all have ties to Illinois.

In addition to increased security cooperation and training programs, we must create closer economic ties between our two countries. The United States is Georgia’s ninth-largest trading partner with two-way trade of approximately $355 million. I believe that if we build upon the strong foundation of our close political relationship, bilateral trade with the United States could be upwards of $1 billion within a short period of time.

We are focused on making US firms more aware of the economic opportunities in Georgia, specifically in agricultural production, transportation, and hydropower generation.

I believe now is the time to take our partnership to a new level, and make Georgian-American relations the backbone of regional stability, economic development, and democratization.

Q: In remarks at the Atlantic Council last year you described Russia as Georgia’s “greatest foreign and security challenge.” Are you satisfied with the results so far of Georgia’s engagement with Russia, including through the Geneva discussions? Do you see a similar commitment from Russia to ease tensions? And how are you balancing your Russia policy with your reconciliation efforts with Abkhazia and South Ossetia?

Kvirikashvili: We have been conducting principled negotiations with Russia in Geneva, as well as talking to them through the Prime Minister’s special representative. While more needs to be done on the Russian side, the economic relationship has improved, as have travel and cultural ties. Russia’s recent decision on the visa facilitation for Georgians traveling to Russia should be seen as a positive development.

However, in the face of Russian actions, such as the so-called cooperation agreements with de facto authorities in Abkhazia and South Ossetia, we cannot let our guard down.

We are making steps in our reconciliation efforts with our Abkhazian and Ossetian brothers and sisters. We want the people living in the occupied territories to enjoy the tangible benefits of a modern nation that is fully integrated into the European and global economies. Our main tool for winning is to build democracy and the rule of law, as well as to mobilize support from the international community.

Q: Why is the European Commission’s recommendation of visa-free EU travel for Georgia significant for your country?

Kvirikashvili: This was a major step forward for Georgia’s European integration. It is significant on a number of levels.

The European Commission’s recommendation for visa-free travel for Georgia recognizes our commitment to European values and the government’s ability to implement demanding and effective reforms.

Most importantly, it means the dream of many generations will come true in 2016 when Georgians can travel to Europe without a visa and stay for ninety days per six months. This marks the beginning of a new stage in our country’s development. Brand new opportunities that were once unimaginable will open up for the Georgian people.

This outcome is also a tribute to the impressive cooperation between the EU and Georgia, specifically the professionalism of the Georgian government agencies involved and the continuous support provided by our European partners and the European Union. This will have major significance for the realization of the full potential of the Deep and Comprehensive Free Trade Area (DCFTA) between the EU and Georgia and will encourage Georgian business to search for new avenues in European markets.

Q: What can you tell us about the pace of democratic reforms in Georgia in recent years? What is your government doing to ensure that free and fair elections are held in October?

Kvirikashvili: Georgia is fully committed to reforms that further strengthen liberty and democracy. It is an honor to lead the effort that the Georgian Dream coalition began in 2012 to develop an open and accountable government that listens to the people we serve. In the last few years, Georgia has made steady gains in strengthening democratic institutions and has won international recognition for its progress in the rule of law, human rights, and governance.

Our government improved the system of political checks and balances. We have ensured that judiciary and law enforcement systems are independent, effective, and depoliticized. These policies have enabled us to maintain economic growth and political stability amidst the backdrop of regional instability.

The presidential and municipal elections held in 2013 and 2014 were widely considered by international observers to be free and fair elections. This year will be no different. A nation’s democratic transformation is a continuous process and we expect to demonstrate even greater progress in the 2016 parliamentary elections.

Q: Georgia’s weak economy has been widely blamed for a decline in the popularity of the ruling Georgian Dream coalition. What are the challenges you face in energizing Georgia’s economy and what steps are you considering to overcome these challenges?

Kvirikashvili: This government’s goal is to make the dream of a better life a reality for all Georgians, whether they live in cities or rural areas. While we’ve made significant investments in the healthcare, education, and agricultural sectors that have improved people’s well being, there is still more work to be done.

We are focused on growing our economy to provide more jobs, while taking our country ever closer to European integration in order to provide tangible benefits to our people.

Soon after our coalition came to power in 2012, our economy was buffeted by strong external economic headwinds and regional security crises in Ukraine and the Middle East that drained the region of international investment and hamstrung growth. The Georgian economy is now on the right track and moving forward.  In 2015, Georgia attracted a record $1.7 billion in foreign direct investment.

Today, Georgia has an incredible opportunity to develop itself further as a vital commercial link between Europe and Asia. Last fall, we hosted the inaugural Tbilisi Silk Road Forum that brought together 700 business and government leaders from over thirty-four countries to explore partnerships and align visions for the Silk Road region. We believe this will be a driving force for our economic growth for years to come.

I also believe we can transform our economy by promoting a spirit of entrepreneurship. We often see that existing businesses develop at full swing, while new businesses fail to attract financing for their ideas. To address this we are going to launch new programs to promote startup businesses. We will dedicate significant resources and energy to support new enterprises and empower young people with innovative ideas. These efforts will help foster a strong middle class and provide jobs for younger Georgians.

Image: “Progress in the European and Euro-Atlantic integration process will be a good incentive for the population of Georgia to continue supporting the reforms,” Georgia’s Prime Minister, Giorgi Kvirikashvili, told the New Atlanticist in an exclusive interview. (Reuters/David Mdzinarishvili)