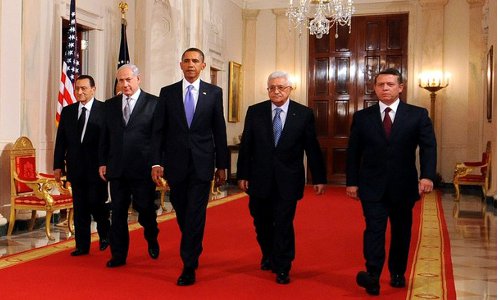 The essentially cadaverous Palestinian-Israeli “peace process” took another of its periodic turns away from any meaningful or likely movement in the direction of a peace settlement in the past week, after the equally ritualistic and doomed staging of another peace meeting in Washington last month between Israeli prime minister Benjamin Netanyahu and Palestinian Authority (PA) head Mohammed Abbas in Washington, presided over by President Obama, Secretary of State Clinton and special emissary George Mitchell. Some things never change in basic dynamic; only the peripherals are different.

There were two symbolic events that submarined the latest episode in this geopolitical soap opera. First, the Israelis refused to bow to international pressure and extend the ten-month moratorium on new settlement construction on the West Bank. Instead, the Israelis quietly let the ban expire and thus opened the way for more new Jewish settlements in the occupied territories. Regardless of the position one might take on Israel’s “right” to build these additional Israeli enclaves in the disputed territories, there is no denying that doing so is an absolute deal breaker in terms of any progress in reaching a lasting accord between the Palestinians and the Israelis. The Palestinians, quite simply, will and politically never can accept this usurpation (in their minds) of parts of what they believe should be parts of the sovereign state of Palestine to Israeli control. Since the Netanyahu government bases critical parts of its continuing tenure on support from the settlers who want to expand their domain on the West Bank, the result is an impasse that cannot easily be overcome. More settlements=no peace agreement. It is really as simple as that.

The other event was described in a New York Times article on October 9, 2010, and it involved attacks on Palestinian olive trees (cutting off branches, cutting roots to kill the trees) by what are described as Israeli “extremists” from the settler community. The incident is not unique, apparently, but it does point to another factor that makes progress toward a peaceful resolution of the Israeli-Palestinian situation all the more problematical: the dominant role of political extremists on both sides who are opposed to any peaceful settlement (one acceptable to both sides), who will act violently to stir up animosities as a way to preclude peace, and who are sufficiently powerful in both communities that neither government will (or can) rein them in.
The Palestinian extremists are better known in the West, because the Israelis and their allies have been more successful in bringing them to our attention. Hezbollah and Hamas have become synonymous with terrorism and acts of atrocity against the Israelis that harden Israeli opinion against the peace process, which is the intent of these actions. The Palestinian Authority has been unable or unwilling to suppress the activities of their extremists, fueling Israel’s position that the Palestinians cannot be trusted with a sovereign state. There is merit to this assertion.
What is less well publicized is Israel extremists. Most of these characters come from small, yet fanatical fringe groups, and they are totally and absolutely opposed to any accommodation with the Palestinians. The fact that many of them are settlers whose homes might be the subject of negotiations adds to their dedication and vitriol. In the past week, the olive tree incident was accompanied by another act, the desecration of a Mosque on the West Bank, including the burning of copies of the Quran by Israeli militants. The Israelis hardly lift a finger (despite pious denials of their indifference) in the face of such acts intended, quite simply, to destroy the peace process; the Times story on the olive tree killing, for instance, states that Israeli Defense Forces (IDF) brought to the scene simply implored the Israelis committing the acts to stop doing so.
The dynamics of Palestinian and Israeli extremism are remarkably similar. Israeli right-wing extremists want to preclude a movement toward peace, and their method–like that of Hamas or Hezbollah–is to create so much outrage in the Palestinian community that they cannot negotiate with the Israeli government. Like the PA, the Israeli government is unwilling or unable to suppress their fanatics, partly because these provocateurs have some public support and partly because the ruling coalition depends on them to maintain power. Continuing extremist violence (on both sides)=no peace settlement. It is also as simple as that.
Where is Middle East peace headed? It is not evident that it is headed anywhere. As long as Israeli settlements proliferate on the West Bank and political extremists on both sides operate to effectively block progress, the process can go nowhere. Solving these problems may not be sufficient to move the situation forward, but doing so is clearly necessary for that result.

Donald M. Snow,Professor Emeritus at the University of Alabama, is the author of over 40 books on foreign policy, international relations, and national security topics. This essay first appeared at his blog What After Iraq? Photo credit: Getty Images.