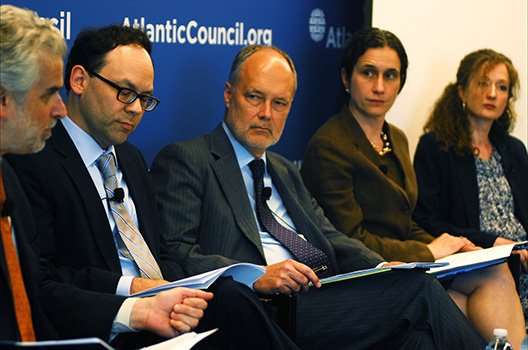 Africans generally love the United States, as do most of India’s 1.3 billion people, but Russians aren’t thrilled with US foreign policy, and Israelis—although they consider America their strongest ally—simply don’t trust President Barack Obama very much.

People worldwide, however, generally support US military efforts against the Islamic State of Iraq and al-Sham (ISIS), even if they disagree with the harsh US interrogation methods used against terror suspects in the years since the September 11, 2001, attacks.

Those are among the many findings of the Pew Research Center’s comprehensive “2015 US Image and Global Balance of Power” survey, the focus of a June 24 panel discussion organized by the Atlantic Council’s Brent Scowcroft Center on International Security.

“Of all the international topics we study at Pew, this is probably the one that’s gotten the most attention over time,” said Richard Wike, Director of Global Attitudes Research at Pew. “That’s because it’s been such an interesting story over the last decade.”

Wike said his nonprofit, nonpartisan think tank surveyed random samples of residents in forty countries between late March and late May, usually face-to-face in peoples’ homes, but by phone in the United States. The poll’s margin of error was 2.8 to 4.3 percent.

“That’s pretty consistent with what we’ve seen since we started polling in 2002. In Asia, Latin America and also in Europe, the US got mostly positive ratings,” said Wike. “The clear exception is the Middle East. This is the part of the world where we didn’t see the ‘Obama bounce’ after the President’s election. In Jordan, just 14 percent say they have a favorable view of the US—the lowest percentage in the survey.”

The United States is vastly more admired next door in Israel, where 81 percent of respondents gave the Jewish state’s closest ally high marks.

Yet in the past year, Obama’s stature has fallen there more steeply than anywhere else in the world—from 71 percent to 49 percent in terms of his confidence rating—and now registers just 40 percent among Jews who identify with the right-wing Likud party of Prime Minister Benjamin Netanyahu. And eight in ten Israelis disapprove of the way the White House is dealing with Iran’s nuclear weapons program—a major source of tension between Netanyahu and Obama this year.

The President isn’t especially popular in Russia either, though for very different reasons.

“Attitudes towards Russia have become much more negative over the past few years,” Wike explained, noting that in 2013, some 51 percent of Russians had a positive view of the United States. That’s tumbled to 15 percent this year.

“Obama’s numbers have never been great in Russia to begin with,” he observed. “Just 11 percent of Russians say they have confidence in President Obama to do the right thing in world affairs. We’ve seen lots of evidence of rising anti-Americanism in Russia.”

By contrast, nowhere in the world did this nation enjoy a bigger popularity boost than in India, whose President, Narendra Modi, has forged a warm friendship with Obama.

“Over the last year, US favorability there jumped from 55 to 70 percent, and confidence in Obama from 58 to 74 percent,” he said. “Of course, there’s been a lot of high-profile travel between these two countries, and these kinds of things can have an impact on public attitudes.”

The survey found that 62 percent of respondents backed Washington’s current military campaign against Islamic State in Iraq and al-Sham (ISIS), while only 24 percent were in opposition. The highest support came from Arabs in the Middle East, where support averaged 77 percent. High levels of support were voiced in Europe as well, but not in Latin America, where “ISIS just isn’t seen as that big of a threat.”

Despite widespread endorsement of the anti-ISIS campaign, said Wike, a huge sore spot around the world “is the post-9/11 interrogations that a lot of people consider to be torture,” with 50 percent of respondents saying they were not justified and only 35 percent saying they were. Among Americans, 58 percent said the use of such techniques was justified—with Republicans far more likely to defend such methods than Democrats.

Yorke, a Visiting Fellow at King’s College London, wondered whether foreigners who look kindly on this country do so because of US policy—or in spite of it.

“It’s been quite a bruising fifteen years for the United States, which saw overwhelming support after 9/11 but has faced a number of questions about the way the war on terrorism has been run,” she said. “We also had Guantánamo, the NSA scandal, Edward Snowden, red lines in Syria, and whether America did enough, especially with the rise of ISIS.”

Likewise, Bensahel said she was surprised to see such strong global support for the battle against ISIS, but such a lack of enthusiasm for the way Obama is leading that fight.

This year, Pew asked some questions specific to regional issues, including whether respondents were for or against the proposed Trans-Pacific Partnership (TPP) now under debate in Washington. Interestingly, supporters outnumbered opponents in all nine of the twelve TPP member countries in the survey, including the United States—although support is a little more tepid here than overseas.

“There’s some evidence that as the US economy continues to recover—even at a slow pace—and China’s growth slows, these broad economic patterns are starting to register with citizens around the world and it’s now shifting back in America’s favor,” said Wike.

“By a nearly two-to-one margin, Chinese say the US is trying to constrain China’s rise and prevent it from becoming as powerful as the United States,” he said, though interestingly, 48 percent of respondents said China will eventually surpass the United States as the world’s dominant power, while 35 percent think it’ll never happen.

“We also asked if the US committing more military resources to Asia would be a good or bad thing, and on balance, people tend to see it as a good thing, especially in Vietnam, Japan and the Philippines,” Wike said. “Americans, however, are more divided, with 47 percent saying it’s good and 43 percent bad—a very lukewarm embrace of the pivot.”

Finally, he said, “we asked Americans whether we should use military force to defend our allies in Asia if one of them got into a conflict with China; 56 percent said yes and just 34 percent said no. But there were big partisan divisions,” he said, “with 68 percent of Republicans saying yes and only 49 percent of Democrats.”

He added that “South Koreans, Filipinos and Japanese think the US would use military force to defend their countries against China, so at least in these three countries there’s a fair amount of confidence about US military commitment.”

That isn’t much consolation at all, said Bensahel.

“Japan’s 60 percent confidence that we’re going to come to their defense wouldn’t make me sleep well at night,” the scholar remarked. “If US allies lose faith that we will defend them, then one of the fundamental pillars of our international system for the last seventy years is at risk—and that could have huge implications for US policy.”