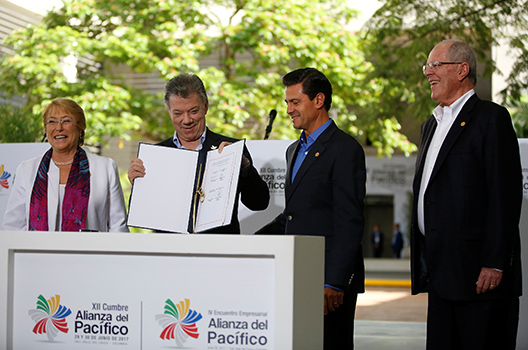 This piece was originally published in Spanish in El Financiero on July 24. The original can be veiwed here.

Following the 13th Summit of the Pacific Alliance in Puerto Vallarta, it’s evident that this bloc is the future, and that it offers a prime opportunity for Mexican President-elect Andrés Manuel López Obrador (AMLO). The Alliance has achieved much in the past few years, and today’s global trade uncertainty once again underlines the importance of this group, committed to finding best practices to benefit its members.

The Alliance, comprising Mexico, Peru, Colombia, and Chile, has quickly become Latin America’s darling economic bloc in the eyes of global investors. In its few years of existence, it has reached impressive levels of tariff elimination and standard harmonization, and has attracted 55 observer states in the process.

Equally—or perhaps more—importantly, also in attendance at the Summit were the heads of state from Mercosur, the Southern Cone trade bloc composed of Brazil, Argentina, Uruguay, and Paraguay. Though yet to take office, it has already become clear that AMLO will have the opportunity during his term to set the tenor for Mexico’s trade relations in the years ahead, and indeed those of the region as a whole. By embracing Pacific Alliance-Mercosur convergence, AMLO can make good on his own campaign promises while helping to make Latin America into the trade powerhouse it has the potential to be.

Elected against a backdrop of global trade uncertainty—especially emanating from Mexico’s northern neighbor—AMLO campaigned heavily on the need to diversify the country’s trade relationships, as well as the need to integrate Mexico further with Latin America.

It’s hard to imagine a more decisive step in both those directions than championing Pacific Alliance-Mercosur convergence. When added together, the two blocs account for 81 percent of Latin America’s GDP, and over 90 percent of its FDI inflows. The obvious profit to be made from integrating the two trade areas has prompted a series of recent overtures between their member states. And not for nothing, as intraregional exports in Latin America currently make up only about 20 percent of total exports—far below the EU’s and East Asia’s 60 percent and 50 percent, respectively.

But the value of convergence goes beyond simply increasing intraregional trade. For Mexico and its Pacific Alliance partners, the advantages are three-pronged.

First, the obvious. The four countries would, of course, benefit from greater access to Mercosur markets. For corn-consuming, car-producing Mexico, in particular, Brazil and Argentina, with their advanced agriculture sectors and huge markets for automobiles, are natural fits.

Second, integration would see Mexican companies become more competitive in the global marketplace. Further harmonizing standards across Latin America’s biggest economies would allow for the sort of integrated supply and value chains that have so far eluded the region. Mexico’s years of open economic policy have created an abundance of market-tested firms that would be perhaps the best poised to capitalize on these new linkages.

And third, as AMLO takes office with an eye on global diversification, integration of the two blocs would grant him—as well as all Pacific Alliance and Mercosur members—a stronger negotiating position for new trade and investment deals.

This becomes all the more imperative as China seeks to strengthen its foothold in the hemisphere. Beijing’s commerce and investment are welcome in Latin America, but the unique nature of the Chinese economy means the terms of the relationship matter. Mexico will enjoy far greater leverage negotiating as part of an eight-country, $5 trillion bloc.

And aside from immediate tangible benefits, Pacific Alliance-Mercosur convergence would carry significance as a major stepping-stone toward a more ambitious goal. A recent Inter-American Development Bank report assesses what an eventual region-wide free trade area might look like. While the prospect seems far-off today, similar efforts are rapidly gaining momentum in East Asia and Africa.

The report estimates that a free trade bloc spanning from the Rio Grande to the Tierra del Fuego could boost intraregional trade in Latin America by $11 billion annually, and greatly decrease the region’s vulnerability to external shocks and global trade frictions. The single most consequential step toward making this a reality, the report emphasizes, would be Mercosur-Pacific Alliance integration.

Soon to be leading the Pacific Alliance’s largest economy, AMLO will have the opportunity to spearhead Latin America’s most ambitious trade integration project to date. It’s a project that aligns perfectly with his domestic priorities, today’s regional political context, and today’s global economic context.

If brought to fruition, this project could propel Latin America into a new era of productivity, profitability, and prosperity. And now, as AMLO prepares to begin his long-awaited presidency, the ball is squarely in Mexico’s court.

Jason Marczak is director of the Atlantic Council’s Adrienne Arsht Latin America Center, which is unveiling a new Pacific Alliance-Mercosur line of effort. He is co-author of the report Pacific Alliance 2.0: Next Steps in Integration.