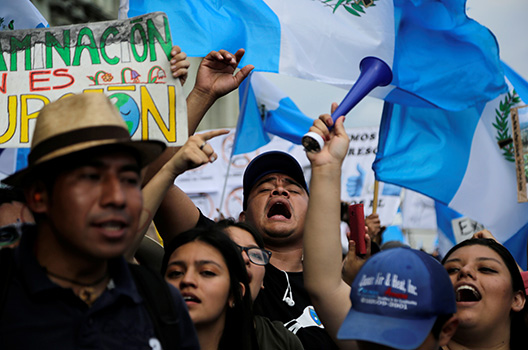 Summer 2018 was a season of scandals in Latin America.

Argentine headlines in August were dominated by revelations from the “notebook” scandal, which revealed years of bribes hand-delivered from private corporations to the residences of former-presidents Néstor and Cristina Fernéndez de Kirchner. Meanwhile in Brazil, the drama of the judiciary’s years-long corruption investigations continued to play out, as former president and then-presidential front-runner Luiz Inácio Lula da Silva spent the summer contesting his conviction on corruption and money-laundering charges. Most recently, Guatemalan President Jimmy Morales raised international alarms when he sent army tanks to the headquarters of the United Nations-backed Commission Against Impunity in Guatemala (CICIG), ending the anti-graft body’s mandate in dramatic fashion.

But the streets of São Paulo, Buenos Aires, and Guatemala City are surprisingly quiet. While more than a million Brazilians took to the streets to protest corruption in 2016, and protests by thousands in Guatemala in favor of the CICIG in 2017 forced Morales to reverse an earlier decision to expel the commission, recent protests have been considerably smaller. Latin Americans, it seems, are growing tired of their countries’ never-ending stream of corruption scandals. This could spell disaster for the region’s anti-corruption crusaders.

Latin American countries have made notable strides in fighting corruption over the past few years. Changes to the region’s legal systems have made the judicial system more transparent, and new corruption fighting tools, like plea deals and specific anti-corruption measures, have allowed prosecutors to go after corrupt officials and uncover cases of bribery like never before. These successes, however, represent a double-edged sword. As each new case helps illuminate the scale of corruption in Latin American politics, the resulting never-ending media coverage of corruption scandals is testing citizens’ patience and confidence.

The result is what sociologist Silvio Waisbord refers to as “scandal fatigue.” While the first revelations of corruption may mobilize the public to protest against official wrongdoing, subsequent coverage can actually foster apathy. Constant revelations of wrongdoing can create the perception among the public that misbehavior is the norm rather than an anomaly deserving of special punishment. Citizens become increasingly ambivalent, rather than outraged, at wrongdoings.

Take, for example, the case of Brazil. When Brazil’s federal prosecutors launched “Operation Car Wash,” an investigation into bribes paid by the country’s largest construction firm, Odebrecht, to governments across Latin America, in 2014, the ensuing scandals prompted millions of Brazilians to take to the streets to protest the rot uncovered in their political system. Public outrage and continued conversation forced the judiciary and the legislature to hold the accused accountable; as of August 2018, more than 200 politicians and business leaders have been convicted for bribery and money laundering.

But after four years of non-stop media coverage of corruption by local and national politicians, Brazilians seem too tired to care about the misdeeds of officials that they have long assumed to be corrupt anyway. Although most international media has covered Lula’s conviction as a main story of the country’s 2018 presidential election, polls show that ordinary Brazilians are more concerned about issues that affect their daily life, like violence, unemployment, and the economy.

This situation is not unique to Brazil. The “notebooks” scandal has already faded from Argentina’s front pages, and experts predict that the scandal will have little effect on the Kirchners’ party’s chances in the country’s 2019 presidential election.

The picture is not all bleak: in September 2018, Colombia’s new president, Iván Duque, joined the political opposition to promote a national referendum on anti-corruption reforms. While turnout was not high enough to enact any of the ballot measures as law, the mobilization of 11.6 million voters has given the referendum’s backers a strong mandate to push the reforms through Congress. Weeks later, Peru’s President Martin Vizcarra announced that he intends to hold a similar referendum. Even Brazilians can be heartened knowing that corruption scandals have spurred a new generation of candidates to run for office on the congressional level and face their country’s corrupt ruling class head-on.

But those fighting corruption in Latin America need the public to continue to push for anti-corruption legislation and hold their governments accountable. Tackling Latin America’s corruption problem will be a slow process; successes in other countries, like Georgia and Rwanda, took decades to achieve. Latin America is on the right track, but it can only stay on this path if its citizens don’t fall asleep at the wheel.

Jamie Shenk is a Latin America Fellow at Young Professionals in Foreign Policy (YPFP) and a doctoral student at the University of Oxford. You can follow her on Twitter @jlshenk11.